You just got to love a title that only 40K players can understand, right? Yes, I painted up some of the current plastic Imperial Guard in the old Warhammer 40,000 Rogue Trader-era Necromunda Spiders color-scheme circa 1989. 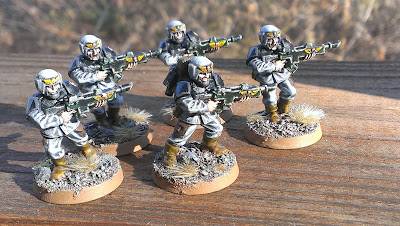 OK let me expand on why I did this: a long time ago I showed off some of my pal's old Rogue Trader era Imperial Guard guys that I painted for him along with some of the models that he had others do for him as well. For the sake of professional anonymity I refer to him on this blog as 'The Doctor'. You can see those Imperial Guard models here. I have always loved that paint scheme, and in ages past when my brother was collecting IG, we agreed to paint his Cadians in this color scheme as well. I only ever did the one model and you can see him below.

He remained a test-bed for future color schemes, only that I painted him so long ago (somewhere between '97-'00?) that I either couldn't recall the exact paint combination or that one of the mid-tones is a GW color that dried up on me which there isn't a current analog for. Regardless, I was determined to try it. Spotting a fairly cheap 'plug and play' box set of 5 Imperial Guard troopers I figured it would make for a fairly quick experiment. It was around about this time last year, perhaps a few months further back, that I mostly finished these guys, but for whatever reason, I just didn't. In the next pic you can see one of these troopers behind a Long Fang that I completed back in February of this year (2013) to give you a clue as to the "smorgasbord" painting technique that is my painting station! LOL!
﻿

Slight digression: this pic was apparently overlooked when I did the Long Fang posts. You can see how I like to paint the components prior to assembly, and you can see the original Space Wolf decals along with the backpack where I hand-drew the Space Wolf logo. By the way, that orc next to the guardsman is to be completed very soon!

OK, back on topic: During my Thanksgiving break I wanted to finish something! Finishing Mad Dok Grotsnik was quite rewarding and I wanted to do that to something else. For the sake of doing something different, and because they were so close to being finished, I chose these guys. Just a few touch ups, and they were done.


Funny thing is, it took me the longest to complete their transfers. I opted to stick with the 2nd edition era regimental organization that was laid out in the original Codex: Imperial Guard.

I very much prefer this over the vague and lazy system that the GW design team has used since. You can't see it on the old Cadian at the start of this post, but he has a patch colored Yellow Company, Blue Platoon. I decided that all of my old metal Cadians will retain this scheme, but the newer style models will be part of a different platoon. I feel that this works great since that is how they are purchased in the current Codex (i.e. by the platoon). My Valhalla models will be part of the same company as well, but I haven't thought out what their companies will be yet.

The platoon I chose for these models was Red Platoon. So, what I did next was locate the appropriate decal sheet from my decades old collection of GW decals, and paint on the colors after gauging the size of the decal. I then transferred the decal (this always makes me cuss like a pirate). I then trimmed off any excess, before finally going over the clear parts of the decal with black paint to not only cover that clear area, but to cover the over-lapping color and to add additional bond to the decals. The next pic should help with making sense of the result of what I just described.

﻿
Using the Middenland Tufts on Mad Dok Grotsnik a few days before, I was really hooked on how well this looked and how easy they are to apply. I decided to not use static grass on these guys but only use a few strategically placed tufts. I thought this gave a more hardened battlefield look, and it also reminded me of the New Mexico desert (of which I have some rather fond memories of).

I found a guy selling an IG bitz bin on ebay awhile back and scored a whole bunch of backpacks, arms, guns, etc. I painted up one of these to add to this unit just to break up the monotony of these push-and-play models (BTW-these guys suck in that regard: you have to glue their guns in if you want them to stay on during game play!). I am most likely going to be putting together a small force of British soldiers for Bolt Action (Gasp!) and I used this backpack as an excuse to play around with their color scheme. I think it turned out good.

What does the future hold with this unit and my Imperial Guard in general? I'm not sure at the moment. With rumors of them getting a new Codex soon, I'm reluctant to put the whole army together only to have to reorganize it like I seem to have to do the Space Wolves each time they get a new book. So I will hold off on them for now, although I want to take this Squad up to unit size of 10. The perfectionist in me (having seen the blown up photos while typing this post) wants to do some slight touch up on their guns. Otherwise I like how they look with this paint scheme. I do think future models will loose the yellow wing motifs and I will probably try out a metallic gold instead.

I hope you enjoyed; let me know if you think this works!

"I'm reluctant to put the whole army together..."

lol, like that would happen anyways. I don't think I've EVER seen you field IG.

That metal cadian is still probably my favorite cadian mini ever!

LOL, that's because I never have fielded IG before. I hope too though. The IG will be a massive project for me, but I hesitate to do much more than dabble on the models until the next Codex is out. Honestly, the metal guys are mostly single pose and would "go together" fairly fast. It's the heavy support teams that will the challenge I think.

and at their core, those single pose metal models won't change with the new dex, so get painting!!!

I sense a strong desire from you to kill humans, were the Orks too tough? :) Or are you sick of seeing Space Wolves? (Actually, I think almost everyone is!).

When I'm rolling an inordinate number of 1s & 2s, EVERYTHING is too tough! Yes sick of the wolves (not that we see them too often, thankfully). Though I am guilty am using that codex for the Angry marines (who got punted from the Fem Fa'Tau's allies list this week in lieu of the glorious fores of the Imperial Forestry Service!).

...Wouldn't the BA Codex be more appropriate for Angry Marines?