The very first post of this blog was posted on 4/26/2011. It was called Genesis and it humbly laid out a vision for the intent of this blog; A footnote version of a manifesto if you will. Strangely I posted on the 26th of April (Celestial Lions-kill-team-part-6) but I was oblivious that it was the blog's birthday.

Over time we have all witnessed other blogs do give-aways of some sort to commemorate an anniversary for their blog, but I never seem to either remember or notice when the anniversary comes and goes for my own. This time I decided I am going to make an exception and in doing so also acknowledge the 30th birthday of Warhammer 40k as well:

I AM GIVING AWAY A SPACE MARINE.


Recently I won an ebay auction on a bunch of late '90's era metal marines. In that batch was another model very similar to the marine featured in Celestial Lions Kill Team Part 6. At first I thought I would use him with either my Ultra Marines or Death Watch as I have no intentions on expanding the Celestial Lions past the current Kill Team and Land Speeder, but I was unsure. When I realized the 6th year anniversary of this blog was here it occurred to me what I could do... 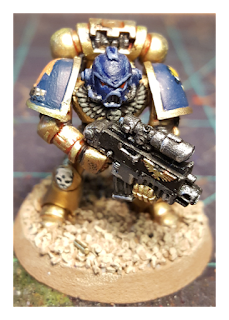 So here it is:

***If I know you personally (we message on FB, you have my phone number, etc.) you will be excluded from the tally to remove any sense of bias. However, feel free to join the fun and to comment regardless. And if you really want me to paint a marine for you, you know how to just ask me. :)
Posted by neverness at Thursday, May 04, 2017

http://nevernesshobby.blogspot.co.uk/2016/11/darkness-darkness.html
Nope, changed my mind, it was this one, and I'd found your blog a lot earlier than I thought in my previous comment! Happy Blog Birthday!

New to the hobby, I recently discovered your blog. I have been slowly reading back through it. I'm going to say that so far, this is my favorite.

Mainly because I decided after my salamander kill team, I was going to build a death watch h kill team.


The Khorne Dog salutes you in your endeavor to sacrifice a vile and loathsome loyalist!

Also, after perusing 6 years worth of links at the right, I think this blog needs more squiggoth...

Yes... but that squiggoth won't see the light of day until I live in a place big enough to accommodate it.

I don't have a favourite post or such. Only just found your site so it wouldn't be right. Looking forward to seeing more going forward.

I honestly have shit memory so without cheating the last thing I liked was the Keeper of secrets (She who milks). Just augmented enough to fit with the rest of your stuff but not overdone which is the balance I favour.
Here's to many more !

Oh, and if it's your first time here that's cool, just say so and I'll count you. Or You can just pick one of the Popular Posts from the sidebar too if you like.

I never realised that they actually managed to ship this across the pond and back. And like you I was impressed with the scope and all the little cool bits in it. And then I found the Preatorian vs Ork "Orks Drift" diorama, which was gobsmakingly even bigger.

And now my Rory Priest like confession; You're not my blogroll. No idea why not. I'll go and sort that out.

One more day left to participate for your chance to win.