Over the past few weeks I have dabbed a bit more on these WHFB Orcs.
These first two pics show the completed highlight of thinned goblin green over the ink wash and the addition of bleached bone on any teeth and bone bits. 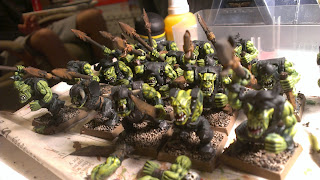 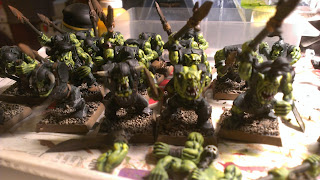 These next two pics show them with the finished sunburst yellow highlights on their flesh, This coat was generally thinned with only slight highlights of solid color on the uppermost parts. They look great, though sadly these pics didn't turn out as well as the ones above it, but I still think you get the gist of it. I also added more color to the spear heads and colored their eyes red... 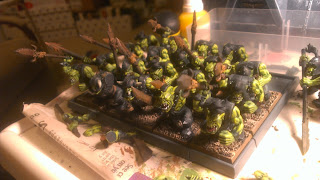 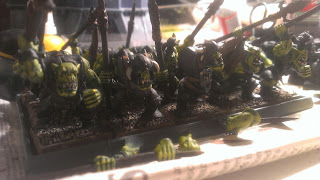 Also, I put together a movement tray for them using the kit GW makes. I am still debating whether to magnetize it...

...and another addition to the living room 'paint station' are these guys. As promised this divergence into Fantasy will also give me the opportunity to paint some 40K orks as well, and here are some that have showed up for their chance for some color. Also there is a single night gobo that I want to do as a study. I don't have any night goblins except for this chap and I am keen to see how well they paint up. 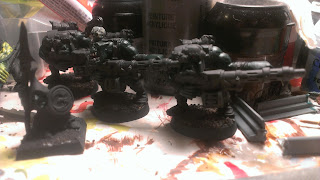 The market price of Wolf Pelts on Eldar Craftworlds


Greetings! During my awesome 4-day Independence Day break (the 1st day was spent mostly painting rhino tanks) I managed to get in a game with the devious Warfrog who has been too busy polishing the skulls of his defeated rivals since the new Eldar codex was released upon the unsuspecting world to update his own blog. He has been fielding a list, that in all honesty, changes the way the game is played. Not only in it's execution, but in the manner it which it must be engaged. I shouldn't say it "changes the game", it's still 40K, however it exploits some of the newer aspects of the rules that those of us with fairly static lists are having a difficult time adapting too. His first outing with this list was chronicled by Da Masta Cheef  here. It was a crushing defeat against Chaos. His 2nd game was against the Wild Bink's Orks. It was a complete slaughter with easily 80% of the Ork line destroyed in the first turn. Alpha strike was shown to be a reality in ways I have not seen yet in this edition.

Ok so this will be a bit different. The Wild Bink was trying out a snazzy new digital camera that a director friend of ours let him borrow. We both took a lot of pics, but in the end, I decided that the rest of this report will all be exclusively pics taken by The Bink. They have an almost 'real world' vibe about them and reminded me of WWII battle photographs. That and the unpainted models and scenery look better in black and white as well. So enjoy the images and the highlights that follow:
I won the roll off and the Wolves set up first.

﻿﻿
We both had Master of Princeps as our Warlord Traits, however we were both pleased with our positions and we opted out of moving any units. Then the pointy eared bastards stole the initiative! Bastards!
And thus the foiling of my plans began...

Somehow I survived the Eldar 1st turn Alpha Strike. But they took First Blood with the destruction of the whirlwind and the subsequent wrecking of the Rhino on the bridge.

Space Wolves Turn 1 was largely ineffective. I killed a few warp spiders and a Jet bike, but nothing significant occurred.

﻿﻿﻿﻿Eldar Turn 2
On this turn the 3 Fireprisms all rolled 1's to hit, however despite this unusual bad luck the warpspiders and jetbikes easily compensated with sheer numbers. They blew up the rhino carrying the other Grey Hunter pack.

Sven joins the Grey Hunter pack, and they charge the closest Fire Prism and destroy it with Krak Grenades!

As you can see the this last pic, the Eldar hunted down the exposed packs that had ventured forth to kill the two Fire Prisms. Sven's pack was cut apart. The other pack was reduced to just 2 models, the Lone Wolf (and cub) were shot down, and the Vindicator was eliminated. The board was filling up with spooling heaps of mono-filament wire.,.

Quickly I found myself with very little army left to run! Seeing no point in trying to secure these objectives, I sent my two surviving Grey Hunters in to the ruins to charge the jet bikes, which they did.
Eldar turn 4

The two squad of Warp Spiders move in and  surround the Long Fangs, while the Fire Prism moves in...

The other Warp Spiders assist the Jet Bikes who are locked in melee with the two Grey Hunters, but that combat is a tie with no casualties.

The Grey Hunters continue to fight for their lives, but the jet bikes hold on tight!

The Fire Prism and the remaining unengaged Eldar, finish off the annoying Drop Pod, while securing the un contested objectives...


Eventually their luck would expire and the two remaining Grey Hunters were laid low! See the color pic at the end as well to see just how outnumbered they were!


These two chaps definitely earned a fast track to getting their paintjobs finished!

So, I was tabled! Hasn't happened in about 3 years, and that was at Warfrog's hands as well. However, this is a harsh list to fight against! The amount of jink/covers saves available allow this army to soak up a lot of enemy fire, while remaining constantly out of assault range. The Warp Spiders are particularly frustrating, and if my Whirlwind had lasted a bit longer, maybe I could've made a difference. Maybe. The Rune Priest was used a bit recklessly, but that's just the way I use the wolves. I was not able to use the power I wanted too upon arrival due to the conditions of the rules for it, and Jaws of the World Wolf is a bit of a waste against Eldar. Living Lighting would've been a better choice perhaps. Actually, the ability to charge was the most potent thing I could do, but this Eldar list was designed to avoid that at all cost. And when I did get my Grey Hunters in, the squad's power weapon had already been lost. I do believe in hindsight that I was screwing myself out of an attack by forgetting that GHs have Bolters, Bolt Pistols and Close Combat weapons which they can alternate to get +1 Attacks in Close Combat! ....ooops! LOL

Despite the tabling, we still tallied VPs. Eldar 16, Space Wolves 2.

All in all, it was a fun game, and I liked the challenge even though it was very Kobioshi Maru and seems to be grossly one-sided against a typical list! I can see this list sweeping tourneys if executed properly. So after many editions the Eldar have their cheese crown back, but as any old timer from the beginning like me can tell you: that's the way it should be!


And what IS the market place of wolf pelts on Eldar Craftworlds?

"I think it's flooded." answered Warfrog.

What better thing to do on a 4th of July than parade your armies about? Well since I had no plans at all on the 4th, and it was for the most part a rainy day, I stayed in to paint models. Instead of finishing that regiment of Fantasy Orcs, I found myself painting tanks. Again, I was distracted-by-rhinos!

In particular, I just wanted to get this rhino painted. It has been kicking around with just a shadow grey base coat for almost a decade now, and I was tired of seeing it in this state. BTW, this is one that my previous local game store gave me, it was left behind after a weekend of gaming and unclaimed after a few weeks so he gave it to me. It was torn up bad and missing pieces, so I added an assortment of tank accessories from some Tamiya kits and other bits to sort of make up for it.

I have gotten fairly good at hand drawing and painting these 'claw' iconography onto Space Wolf tanks. It is still a pain the but doing them on Space Marine shoulder pads though.


Yeah, yeah, I hear you: "But Neverness, don't you hate Blood Claws?" Well, not the concept, just their current state. And this tank was always theirs. So I stuck with plan.

It wasn't long after this that I had the realization that I would never but Blood Claws into this tank. It only makes sense to put them, in a maxed out squad, into a Land Crusader.

I also deepened the low-lights on my Leman Russ Exterminator (that'll get it's own post eventually) and my whirlwind, which has earned it's additional paint job with it's recent battlefield performance. I not only darkened it's tone, but finished the hull all the way up to the white highlight. I just need to apply a few more touch-ups and it is done. Also I am stuck on where to place the Storm Bolter add on? This original model really didn't provide a spot for it. Thinking on it, it is the reason we stuck the stormbolter on the dover-blade on this Dark Angel whirlwind.  I rarely take any upgrades to my whirlwinds, as they really only have one role, so I might just leave it off. 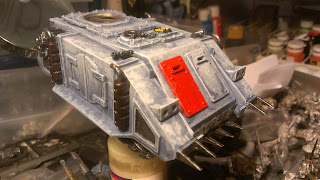 Looking at it reduced, I think I need to darken it a bit more...

SITE UPDATE:
I have added a new page called Other Armies to summarize and provide links to my armies that aren't Space Wolves or Orks. Check it out on the top bar on this blog. I have pics there that do not appear anywhere else on this blog. It is a never-ending work in progress which I intend to continuously update. 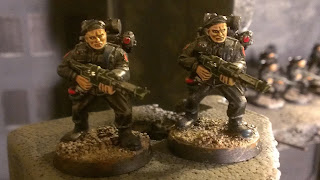 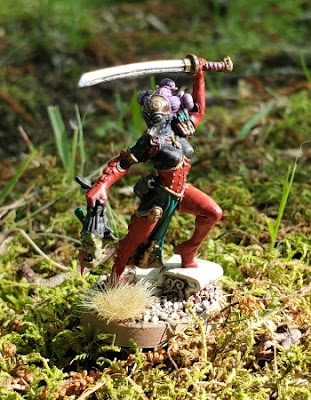