Wolf Priest Jorvik Blacktooth has existed in my lore for a long time now, usually appearing as a correspondent. And those letters are usually in response to some treachery performed by Da Masta Cheef (a very treacherous fellow indeed). But he has yet to appear on the tabletop or even have a model to represent him. Well, we now have a solution for that!


This is the rather rare limited edition Wolf Priest model released in 2002. I believe he was a Games Day promo model. He was only released in metal. It took me ages to find this miniature at a sane price, and two years ago I did. But I have only recently got around to painting him.


Here he is primed black with a base coat on his base.

And here he is with most of his base coats:


And here he is, in his base coated state, leading his Space Wolves to victory! Well, at this stage he is directing more than leading, but a leader never-the-less!


And here he is once again, truly leading now by making the decisive shot of the game that killed the enemy Farseer/Courier. Not too shabby for a first game, and being only base coated!


Obviously with a show like that he need more paint, so to the front of the queue he went!

I kind of went back and forth in these early stages of trying to decide how to paint his various wolf skulls. At one point I was just going to make them a metallic gold, but with so much stuff on this guy already picked out to be that color, I decided some contrast was necessary.

So I followed the examples I have seen of this model online and went with making the winged skulls a bone color.


And this is as far as I have gotten on this guy so far. He is a far trickier miniature to paint than one would think, as I keep realizing more details as I progress. But so far I am pleased.

Beautiful work mate. Lovely model, he has loads of personality.

(blushes deeply) Please sir, do continue with your adoration of me... 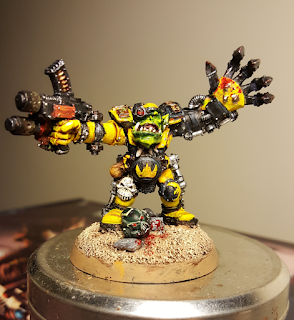