Tales from the Smoking Wyrm #2

Hello.
Blind Visionary launched the Kickstarter for Tales from the Smoking Wyrm #2 a few days ago. And I'm happy to report that it has already funded!
Yay!
And if you were one of the contributors for this or the previous issue, then I humbly thank you.


An old ('cuz we're old) art school classmate of mine did the cover for this one.  But I have some pieces in this one also, including a Shoggoth piece that I am particularly keen on.


And my comic, Onward Retainer! has it's second installment. It's wordy as hell, but I like this one more than the first one. It's been a lot of fun working on this and getting my art groove back on, and this comic has been an important part of that. I still don't think I'm quite at the confidence level I was at the turn of the century when I stopped doing this type of art, but I feel that I am improving with each work I do.


If you play Dungeon Crawl Classics (or know someone who does) and you're interested in it, check it out on Kickstarter, we would appreciate it and I think you will be pleased with it also. One person declared it,  upon holding the first issue in his hands for the first time, "The Fanciest Fanzine Ever". And I do think he is right; it's a nice product we managed to produce and I look forward to getting more people to experience it and to making more!

Email ThisBlogThis!Share to TwitterShare to FacebookShare to Pinterest
Labels: DCC, Tales From The Smoking Wyrm

Thanks! It's been a hoot so far, but a lot of work as well.

This is a unit of orks in mega armor (armour) that I have been keen on finishing for a very long time now. The first model here was finished... 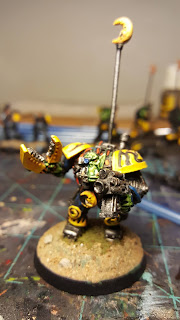