Tales From The Smoking Wyrm #4 Kickstarter

Tales From The Smoking Wyrm issue 4 Kickstarter is now live. Check it out, and hopefully you'll see something there that might entice you to support it.

For those of you that regularly check out this blog, you likely do it because it is primarily a Warhammer 40,000 or miniatures blog. However I definitely played a lot of fantasy roleplaying games back "in the day"*. These included Basic D&D, AD&D (1st and 2nd), Rolemaster, Warhammer Fantasy Roleplay and MERP. And I did so alongside Warhammer 40,000 and other taple top games. Tales From The Smoking Wyrm, while set up primarily in support of Dungeon Crawl Classics (DCC) is written in such a way that the content could be moved to one of those OSR games (or even the more modern versions) with little fuss.

I am once again doing art for this zine. I have some spot illustrations within it and I am contracted to do more. However I am not able to show any of that here at this time. Yet. However if you keep an eye of the Kickstarter campaign, our website, and our Facebook Group** you might see more.

Onward Retainer! is my regular comic strip-thing that I am happy to say is returning in this issue as well. I get a kick out of these characters and their misadventures and writing and drawing them has been a highlight of the year for me. At this time I have scripts written through issue 10 and the story for #5 is already done. (It's nice to get ahead!) 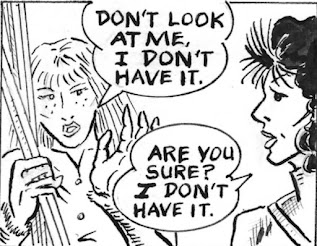 **I can't seem to be able to make a link for it. If you're on FB, just search for Tales Of The Smoking Wyrm.

Posted by neverness at Tuesday, October 12, 2021 No comments:

Email ThisBlogThis!Share to TwitterShare to FacebookShare to Pinterest
Labels: Art, Tales From The Smoking Wyrm

Work on my Death Watch Venerable Dreadnought has begun. And so has Dreadtober!

I started from ground up on this machine. What I mean is that a built the legs first before moving to the torso. But let me show you the torso first anyway:

I had the idea that I would need to magnetize the main weapon arm so I stuck a strong magnet inside the main body of the Dreadnought. I would so discover that this was redundant as not only does this kit come with three complete right arms but they are easily interchangeable. Oops! And, the glue I have used on the magnet was so effective that I have yet to be able to pop it out of it's position. Double-oops!
I noticed as I was building the legs that it would be easier to paint parts of it as I assembled it. So I went ahead and painted the legs metallic with washes of Nuln Oil and Agrax Earthshade to create depth and a sense of aging to the metal.
This is as far as I have managed to get with this kit this week. But so far, so fun. It's a far more versatile kit than I ever would have imagined and I also pleased as the adaptability the design team bestowed upon the model; It's one of the rare few that have this gift!

So far so fun. I think this year's Dreadtober will be as satisfying as the previous years that I have participated in it.

Greetings, and welcome back to another Art Monday. Here is another unpublished Squat piece. This one was done for Inquisitor Magazine back in the '90s for their Squat army list issue. It was rejected due to be overly violent. In hindsight, yeah, I could've toned it down a bit was it really any more violent than some of the stuff in Realm Of Chaos: Lost And The Damned? Debatable. Yet I understood the decision. It was a bit of a bummer as it was one of favorites from the bunch. 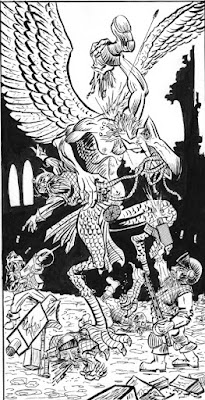 The Tzeentchian Greater Daemon was based off of one of the original Rogue Trader-era miniatures of the Changer Of Ways as it was also still the current miniature at that time. GW would eventually settle on the name Lord Of Change for this beastie also.  They couldn't think of a new name for the Squats however, so they would be left behind to die a dishonorable death by neglect...

As a natural step from my current build up of my Deathwatch army, I have chosen a Venerable Dreadnought to paint for this year's Dreadtober event.  Yes, it's  break from tradition as I usually choose an Ork Dred to paint.

This model came in the 7th Edition Death Masque boxed set. In the scenario within he had a specific load out, a namel (Nihilus) and even a little back story (he's a Blackshield, apparently). I decided to stick to this however I want to make his main weapon interchangeable.

As you can see I am very much in the early steps now. I have primed the model while the parts are still on the frames. Hopefully this will allow me speed things up a bit more in the early stages of painting.
Posted by neverness at Saturday, October 02, 2021 2 comments:

It's  time to go a bit more elite and add some Terminators to my blossoming squads of Deathwatch marines. Like all of the other Deathwatch projects I am working on, these were started back in August with the hope that I could get some of them done in time for the 2021 Inquisitional Conclave. Clearly, I bit off more than I could chew in the time allotted!

Before I bought the models assembled above, I had only intended to build-out one squad of them from the odd ball models I had lying about. This got out of hand quickly as some of my choices led me to abandon some ideas in lieu of others. For example, I now have the start of a Deathwing Terminator squad as a result of discovering that filing off the Crux Terminatus on the left shoulder pad, and then filing it down so as to fit the Terminator sized Deathwatch shoulder pad, was far too much work. So those models were replaced.

Another abandoned project was the notion of magnetizing all of them so as to maximize the potential weapons load out. After doing this on a single model, and being a bit disappointed in the result, I decided to just stick with the load out I was most likely to just use the most anyway.

In one of the above pics you likely noticed the Terminator with the red head. That head was a spare from a Space Marine Heros Blood Angels Terminator who, as you can see below, has also been requisitioned into the Deathwatch.

All-in-all, these guys are beginning to come together and soon I hope to have a formidable Deathwatch force to send out to destroy xenos filth and other vile foes of the Imperium.

Posted by neverness at Wednesday, September 29, 2021 No comments:

This was a piece done for, but rejected by, Inquisitor Magazine back in the late '90s. This was intended for their Squat army list issue. Here we have an old school, Rogue Trader era, Imperial Guardsmen/Officer reacting to having some of the Guard's assets blown up. And being blown up by a Squat Blimp. It was an actual model in the Epic range called the Overlord Airship. I think I dreamt that GW would make a 40k version of one someday, you know, before they set all of our dreams on fire by essentially deleting the Squats altogether. 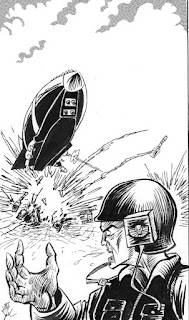 This artwork is unofficial and not endorsed by Games-Workshop. Furthermore this blog and this post generates no revenue for it's owner and is strictly used for, and as, a free entertainment resource in support of games by, but again not official or endorsed, by Games-Workshop.

Welcome back to Art Mondays. Sorry I skipped a bit this month, it's been a manic time. But anyway, here's one you might have possibly seen before: The Last Stand. It's a lone Squat gunner blasting away the nid horde that is attacking him. Note that limited ammunition... also note the mountain of spent shells behind him! 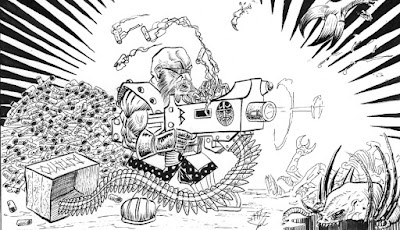 I still think it's an interesting piece. I remember inking this with pen and croquil.

This has been published before, in Inquisitor Magazine #15. It appeared on the contents page of that issue to showcase the massive 2nd edition Squat army list within it. I did a few pieces of art for this issue, all of which Squat themed. Only a few pieces I did were used, some of the unpublished ones will appear here soon.

Posted by neverness at Monday, September 20, 2021 No comments:

When we left off in Part One , I was waiting until it "warmed up outside" so I could prime these models. Well, that's happened... 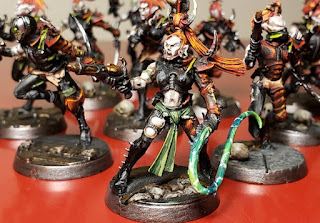