A Spray of Blood

My job takes me to Knoxville TN each week but rarely do I have any free time to do anything fun. Last week was a rare exception and I was able to stop in at the Warhammer store in Turkey Creek. It had been years since I was last there, so I was overdue to pop in.

After having a fun conversation with Mark, the Manager, I got to look thru their stock  of audio/dramas  books but before I could make my selection he invited me over to watch a demo. He was about to show one of the guys how to make blood splatters look more convincing using Citadel's Blood For The Blood God Techincal Paint.


He had clearly put some thought into the way blood would splash back on a guy bringing down a heavy axe on a foe, and gave us a pretty convincing theory on why it would splash back in a particular way. So he picked up an already prepared Khorne guy, determined the angle of splash, held up a brush full of Blood For The Blood God Techinical Paint before the miniature, and with a mighty puff blew the paint onto the model.

And with that, it was done! He uses this technique in lieu of a traditional splatter method as it created less splotches and a more 'stringy' effect with the blood. I thought it was nifty and simple myself, and I may try it sometime as I tend to paint the stuff on in a sort of stippling manner which I am usually OK with.

Anyway, just a fun thing I wanted to pass along. It's always fun visiting an official Games Workshop store and to chat with strangers who are as into this hobby as much, if not more, than I am. Hopefully I can make it down there to cover Armies On Parade this year...
Posted by neverness at Monday, March 25, 2019 3 comments:


I followed Duncan's tutorial fairly close, even going so far as to go down to the hobby shops and purchase some more (select) Citadel paints that I did not have. However there was a blue color that I missed and instead of putting off the completion of the model,  I chose to seek out an analog to it. My old, and rarely used, Lightning Blue seemed to do the trick rather well. It's a bit brighter than how the model in the tutorial turned out, but I like it!

The other deviation was not to paint the flame blue, but instead I painted it a vibrant green. And yes, I stole the idea from someone else after a Google search, but it looked too awesome to just not go with it.

And with that done, all I had left to do was mount him to his base, do a few more touch-ups, and he was finished!


Although I focused on Stormsire, his two companions are not too far behind him and are basecoated.

Alright, here are some glamor shots: 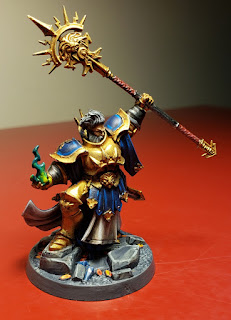 Note that the tutorial on Warhammer TV doesn't show, suggest or even mention the holy water vial on his belt or the broken vials on his base. I painted mine using a blue and the Fang. 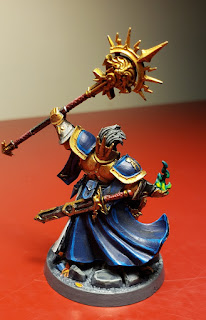 And that's it for Stormsire himself, on to the last two members of this team.

Krom (the Older) is now done!


Before I was finished though, I had some details to tidy up. The first being the axe blade which is supposed to resemble ice. (I refuse to accept that it IS ice simply because...well, that's just stupid). Celestra Grey is the basecoat used for this.

Next a glaze of Guilliman Blue...


...topped off with a dry brushing of White Scar.


Next came his company badge. There isn't a decal (as far as I know) of his Great Company's icon, so I took the Champions if Fenris decal and angled it so the snout was pointing up, colored the moon/circle with Averland Sunset, topped it off with a subtle glaze of Lamenters Yellow before refining the edges with The Fang.  I think it came out alright considering I pretty much just winged it...


And after a few more details such as the gems, claws and spikes, he was done. So now it's time for his glamor shots. Enjoy!


At the time of this writing, it is the morning of St. Patrick's Day, and it's also bright and sunny out, so I thought it would be fun to take him out for some natural lighting shots in the mossy areas of my backyard.

And that concludes this project, now back to the Intercessors...

Recently I posted a (sorta) review on Warhammer Underworlds: Nightvault. Since then I have been mustering stuff to play and run this game. And taking a break from painting Shadow Grey marines, I decided to try to tackle my first warband, Stormsire's Cursebreakers, from the Nightvault starter set. They seem easy enough. And after a viewing of Warhammer TV's tutorial, I was ready to get started. Following Duncan's lead I went ahead and started with Stormsire himself. Unlike the example in the video turtorial I did not fully assemble this model so that I could get to the details better.

The bases were basecoated in Graphite but unlike the typical gray scheme I use, I think I am going to attempt something different that conforms more to the board art in the Nightvault game.

The Graphite and Pewter Grey stages are fairly standard step for me when I paint grey stones, but I deviated here by applying a wash of Drakenhof Nightshade. It's a blue shade, and being a 'cool color' it will alter the tone. I really liked the results, and the effects definitely give me a sense of cold stones.
I next applied a slight layer of Pewter Grey with a highlight of Celestra Grey.


I am quite pleased with how these bases have turned out. There are some leaves sculpted onto the base, which sort of baffled me as I thought
Nightvault was supposed to take place underground in the Glass City or whatever. But hey, leaves have a habit of getting blown damn near everywhere, so maybe that's the reasoning here. After looking online and through the October 2018 White Dwarf I confirmed that I was indeed looking at leaves but the examples were painted green. I decided to go with fallen leaves, and an autumnal look.


I used Wild Rider Red as the base for the leaves and used Fiery Orange. Averland Sinset in various layers for the leaves and some of the leaves got a subtle was of either Waywatcher Green or Agrax Earthshade. The leaves looked varied and staggered and a bit more realistic as a result.

So that finished the bases. And since I spent all this time detailing the bases, I will post the progress on the actual warband in the next part.

I said at the end of Stormhawk Interceptor part-1 that it would be awhile before I would be able to give you an update on this one. Well, the stars aligned just right to allow me to make some progress on this thing.  It all started with a rare find. I was visiting a local gaming store (Dewaynes World) and came across this can of Shadow Gray Citadel Colour spray paint. I have sought this stuff out for years and simply never saw it there before.


The weather here in east Tennessee has simply sucked. Winter has been replaced with a season of mud, water and floods. But in the past two days, the sun as appeared to occasionally dry this place out just a little bit and I saw the opportunity to try out this spray paint.


First though, I had to mask off the sections I wanted  to try to keep black. I used acid free Artist's Tape for this.


I had a really challenging time getting the spray paint to come out of the can at first, but when I finally did I was a little worried that the color may be too bright. Even layered over black like it is, it still seems bright.   But I suppose a lot of paints do this.


After letting it cure outside for a few hours I brought it in and removed the masking tape. The Artist's Tape did the job perfectly! The paint itself seems to have darker as it dried but not too much. I may have to hit the recesses with The Fang to deepen the color a bit more. We'll seen ok once I get around to the assembly stage...

Continuing on from last time, what follows is the progression that I have so far made on this model.

Last time I left the Cape with a Nuln Oil wash. This was layered with Khorne Red, first with a thinned coat then a solid layer to create a better blending  transition.

Then, Fiery Orange was applied to the beard. It was so interesting that I, for a fleeting moment, almost left it like this.


But I toned it done using Agrax Earthshade. This was lightly dry brushed over using Fiery Orange again.


The cape was layered up with Khorne Red over the dried Nuln Oil, then Mephiston Red was strategically applied on the highest contours.


Go Fasta Red was the final highlight for the Cape. The fur was done very differently than how I typically like to paint wolf pelts as I wanted to add some diversity to my Space Wolves color palette.I basecoated the fur using Rakarth Flesh (...does anyone know what a Rakarth is?) then a wash of Reikland Flesgwash before dry brushing it with Averland Sunset. I think it came out fine.


I did all the skulls and bones and the gold hights at this step also. But the most important element was to add a touch a gray to the beard. After all, he is "the older" right?


OK, that's it for this time, obviously he is almost done, just need to do the axe blades and few minor details. But the Great Company emblem on his left pauldron will likely be the biggest challenge in this next phase...