Recently I was digging into some old issues of Warlock Magazine (an old fantasy magazine published by Penguin, and later Games Workshop, in support of Steve Jackson and Ian Livingston's Fighting Fantasy series of books) for some art inspiration for the DCC zine project I am working on. I love the black and white art of this era from the British artists of the mid- '80's. Perhaps it's nostalgia from all the Victor and Battle Action! comics I used to read when I lived there in my pre-teens? And perhaps that same inspiration was what helped pull me into Rogue Trader back in the late '80s when I returned, as some of these same artists were still doing artwork for GW at that time. The old John Blanche stuff is particularly fun to see. Anyway, while perusing this quest for inspiration I happened upon this rather curious advert:


"Psychostyrene", what the? And this image of the crazed berserker dwarves...it stopped me and I had to pause my quest to read deeper into this... 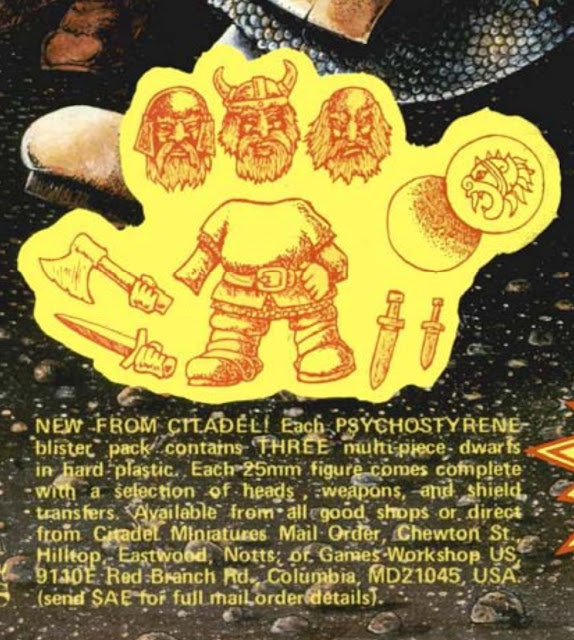 So you got, for 75p, circa 1986, a blister back with three multipart customizable dwarves. Hell, you even got transfers included in the blister! Pretty amazing considering that I thought the single miniature blisters we have today were a fairly recent concept for GW, and here is an example of GW doing it (arguably) better a good year prior to the launch of Warhammer 40,000 Rogue Trader.

And they gave it a wild and obviously crazy title of Psychostyrene. A rather strong title from an LP perspective isn't it? Certainly a bit more radical and unique than say, "Finecast" was for their resin line.

I had to find out more. I needed to know what these things looked like. A quick online search revealed an intact Sprue and an assembled model. And you know what? They didn't look that bad! I would argue that they looked better than their WFB 4th Ed era monoposed models. Oh, it's crude by today's standards, but then again today's standards could have produced this blister in a fraction of the time -and cost- that must've gone into this kit. Apparently, this may have been GW's first attempt at a plastic kit, it's a bold first attempt if so.

Well, the weapons were a tad goofy, but whatever, it's three dwarves, in hard plastic, with transfers and head options -for 75p! That was maybe $1 back then!

It appears that this was followed up with a similar orc plastic blister called Drasik Plastik, but that's for another discussion. As far as I can tell this was the extent of the early attempt at trying to sell plastic kits via blister. I imagine the production costs were a bit excessive at the time, but I am not privy to any facts to support this assumption. GW would of course move onto a boxed set format, with loads more models, to support their games.

But if you really want one of these original plastic dwarves, you can find them on ebay, but for an excessively high cost. They are rare, especially in mint condition, so they are truly a collectable at this point. But a fun piece of Games Workshop history never-the-less.

Email ThisBlogThis!Share to TwitterShare to FacebookShare to Pinterest
Labels: Dwarves 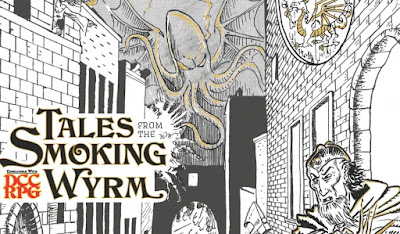 Hey, the Kickstarter for Tales from the Smoking Wyrm-issue-1 is ending in just three days! And I have quite a bit of art in this issue, that I'm very happy with, and I hope all the work I have been doing is well received in the end, and I would like anyone who might be interested in it to get an opportunity to obtain a copy for themselves.


One of stretch goals is that all backers will get a file to 3-D print a TK Rat based off of my art, which I think is just cool as heck. To have a 2-D piece of art of mine inspire something like this is just mind-blowing to me, and I am thrilled to see this happen.


Also, five people pledged to receive colorized versions of my copy-free cover. This is special as these are not prints but unique individualized hand painted pieces by me. And it's taking more time than I thought it would (a phrase I seem to repeat a lot on the site) particularly as I scrutinize just what colors to paint what. When I do black and white illustrations I never think about what color something I will be, I am more interested is balancing out the blacks vs. whites so that the images 'read' clearly to the beholder. So this has been a fun, though time consuming, exercise.

Anyway, if you're interested in owning 'Neverness' art, or just like old school style fantasy RPGs or you are a player of DCC, than act now, there are only 3 days left on the tales-from-the-smoking-wyrm-issue-1 Kickstarter!