While scouring through Amazon last night I stumbled upon this gem:
imperial+infantryman handbook 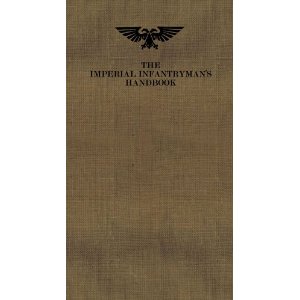 For those of you who have the previous books in this serious, most famously the Imperial Infantryman's Uplifting Primer, you'll know that this isn't just a reference  book, it's practically a prop! Indeed, our copies of Damocles Gulf editions are constantly being used when we play Dark Heresy. Not only are these books dripping with pure Imperial propaganda, they are also impressively mired in military style verbiage and bureaucracy. Indeed, the Primer was a literal extension of military red-tape that the guardsman is forced to carry with him at all times (or get a bullet in the head!). Did I mention that these books are also kinda of funny? Particularly the propaganda regarding how awesome the standard issue Lasgun is at killing everything!

So I have seen zero fan-fare on this title, so hopefully I have done you a service and you'll promptly chase the link and pre-order it like I did! 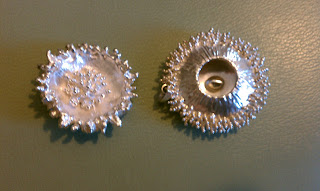 I wanted to share a project with you that I'm doing with my GF. It has VERY little to do with Warhammer and such, but never-the-less, my 'Hobby Chronicle' has a very broad scope, so bare with me here. She sculpts, molds, and casts her own Silver Jewelery in her own workshop that I must say, would be a miniature hobbyist's dream to work in. She's got tools that will, well, let's just say she promises I will never have mold-line/flash issues ever again! LOL

So, my new muse has inspired me to paint again. Oh, not miniatures, but real, 2-D on a canvas painting! And this is the 1st painting I have done since...well, since I painted a Squat for Inquisitor Magazine that got rejected (for being "too dark", which was ironic considering the direction GW's art took not soon after! LOL). That was...'98? Not sure, but you get the idea: this is my 1st painting this century!

It's still not completely done (I intend to finish it this weekend) but I wanted to show the step-by-step of this, as you will see that the techniques I employed here are pretty much the same as what I used in miniature painting.

It started off with a pencil under drawing (which I neglected to take a pic of) that I "inked" with black acrylic. This object is about 10" in diameter. 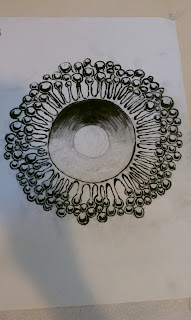 I then proceeded with the background which was a about a 9/10 mix of black with 1/10 blue. 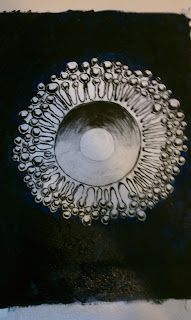 I built up zones of blue to get a color fade effect in the back ground that would run from the upper right down to the lower left. 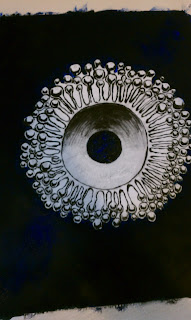 I added the middle area and built up more blue. We thought the painting looked striking at this stage, but I was determined to not cop-out early and stick to the vision. Or did she encourage me...I can't recall, but I went for it. 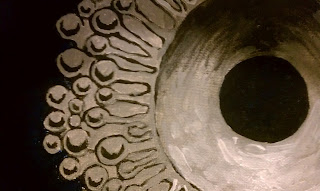 Here is the middle zone painted up to show the middle tone of grey that I was using on the detail on the sides as well as the center "bowl". Looks really simple looking at it this close,huh? The 'orbs' are basically the same technique that use on eldar/high elv gem stones... 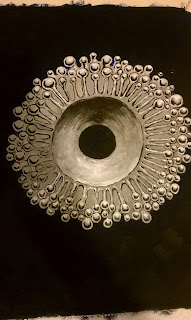 ...which is to put a dark under crescent on the lowest area of the orb and hit the highest part with an intense solid color. In this case, to make it appear like a shiny metal, I layered this with white. This pic shows most of this effect completed accept for a small quadrant. 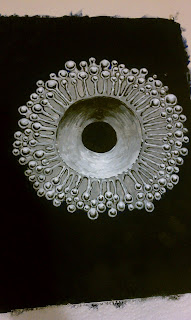 And here it is in it's current, mostly complete, state. I have a few more ideas to incorporate and it will be done.

I don't intend to display all the art I will be doing for this project on this blog, but I wanted to show off that fact that "I'm back" as far as 2-D art is concerned. This project is in support of an art show that she will be selling her wares at, and I might be selling some of the pieces that I paint up there as well.

Oh, and look what I found in my canvas pad: 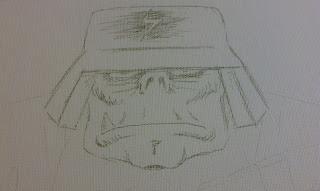 It's a close up of a classic Ork Stormboy! Not sure when I sketched this, but I have been thinking about it since I found it. I wonder if I can paint it up and post it here without being sued into oblivion?

Thanks for reading,
-Joel