You may have heard the hollowing 'cross the vales of Fenris on the cold moonless nights that herald the return of Wolflord Sven Axegrinder!
Sven has been accumulating paint for at least 10 years. In fact he's been mostly done for about 6 of the past few years, I just kept being distracted by other things. Actually that excuse applies to most of my models... however while looking over my Space Wolves after I returned last weekend from my latest work-mission, Sven really appealed to me as something I should get done. So here he is completed and in natural light! 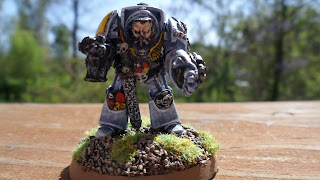 If you're young you might be wondering where I found this model, if you're my age you'll recognize this as this as the original Rogue Trader era Terminator Captain. Made for use with both Warhammer 40, 000 and Space Hulk (no doubt that 1989 was THE year of the Terminator Marine!). This model has more wargear on him than he can currently take in the game. I often just take the powerfist, as I'm fighting things that require the extra strength! But I have been known to just count that sheathed sword as a frostfang. If you look at the fingers on the power fist you'll see 4 jokaro digital weapons, and mounted on top of the power fist you'll see an auxiliary grenade launcher. ....I really want to play a game of Rogue Trader again after writing all of that! 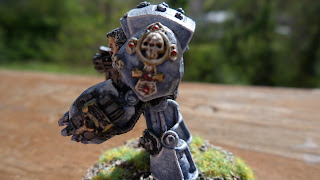 What kept putting me off on finishing this model had to have been all the ridiculous amounts of details. I seriously doubt any single model before or since has this many skulls -tiny skulls all over it! Remember also, that at this point GW was still sticking with an approximate 25mm scale vs. the slightly larger 28mm ("heroic") scale it would soon adopt with the onset of Warhammer 40.000 2nd edition. Still, I think the Crux Imperialis looks awesome on this model even still. 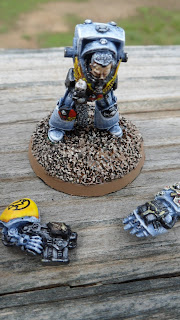 In my earlier articles, Terminator Basing Part 1, you'll see the technique I use for revitalizing my old metal terminators to current base size. Sven here was one of the first models that I used this technique on (just now finished him! LOL) and as a result he doesn't have a lot of other objects on the base, just a mound of dirt. Really at this time, I was just trying to see if the technique would work or look goofy. I'm happy to say I think it works! 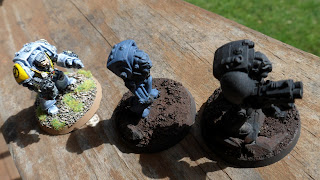 Here he is stacked up with two of the models from that article. Not much progress made on these guys yet other than a base coat on a few of them and the rocks. Note that I also paint my bases as I paint my models for a more seamless experience and, I feel that I also get a more 'natural' looking result by achieving a bit of unity with the model and his supposed environment.

The angle of that pic does give a sense that Sven is a bit small, and he is indeed, compared to the current plastic Terminator kits. For example: 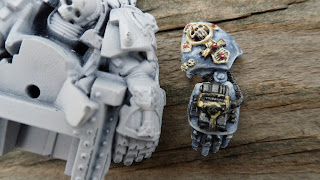 I compared his powerfist to that of the dead terminator from the latest Space Hulk game, and you can definitely appreciate the slight difference! 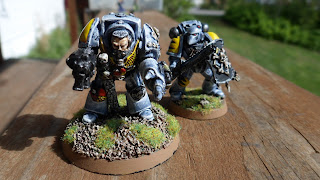 But compared to his Lone Wolf buddy, I feel he holds up well! 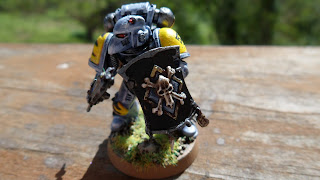 And the Lone Wolf now has a flocked base. I also touched up a few spots that stuck out to me when I last photographed him (but now I see another, a red speck below his eye! *sigh*)
Posted by neverness at Sunday, April 08, 2012 3 comments: