Book Review: Lord of the Night 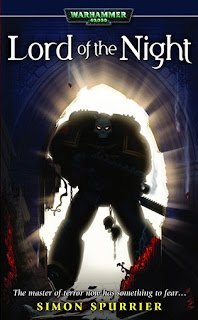 Lord of the Night by Simon Spurrier.

I stumbled upon this book at a local used bookstore. I had never heard of it before, and the synopsis appeared to have a cool plot liken to a Dark Heresy game which easily snagged my interest. I think I have said if before, but I really think from a fiction standpoint, the Warhammer 40,000 universe, particularly the Imperium -it's culture, laws, religions, history, etc.- is best presented in the stories using the Inquisition as protagonists.

I quickly devoured this book.

The basic set up is that a space hulk crashes onto a hiveworld, with it's sole occupant being a Chaos Space Marine, Zso Sahaal, a Raptor of the Night Lords Legion. He awakens to the sight of scavengers plundering the wreckage of his vessel. In particular, they steal a treasured item that he has sworn to safe guard for many millennium. he tracks down these scavengers to the Hive City of Equixus where he begins a campaign of revenge and (literal) chaos.

Also on this Hiveworld is an Inquisitor of the Ordo Xenos named Kaustus along with his entourage of pompous henchmen. His 2nd in command is Mita Ashyn, an Interrogator who is also a psyker. Having psykic visions of the arrival of Zso Sahaal and the carnage he will bring, Mita tries and tries to get her lord to focus on dealing with this new threat, and the interplay is deliciously harsh between these two characters. So harsh that one wonders if Mr. Spurrier was citing personal experience with an asshole ex-boss, as it's that harsh.

This book is divided by the points of view of two characters: Mita and Zso, with each chapter alternating between each. It was a very clever way of telling this story and it helped to keep the events fresh and intriguing. Ultimately, you saw the point of view of Zso and as a reader, you couldn't help sympathizing with his point of view, his world view and motivations, by the end of the book. If anything you come to see the Imperium, with it's zealous laws and rigorous adherence to the maintenance of normalcy and order, as the thing that you despise. 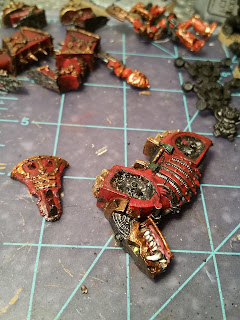 Progress has slowly been made on my Chaos Lord on Juggernaut since my last update in part-5. In fact, he's now complete, and you can follow along with these pics to the final phase below.

As you can see in these first few pics, I liked the bio-organic aspect of this juggernaut model and emphasized the "bio" parts only with it's mouth. I thought it might look cool to make the teeth and gums look real, like a mean dog perhaps. 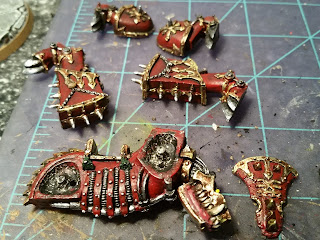 Then came the daunting task of assembly. This model actually goes together quite easily, however it was intended to be assembled on a flat plain, not on the multiple levels of the molded cracked battlefield dreadnought base that I had decided to use.  What I thought would work best would be to assemble it one leg at a time,  Which is what I decided to do:

Then I attached the body to these two floating legs. 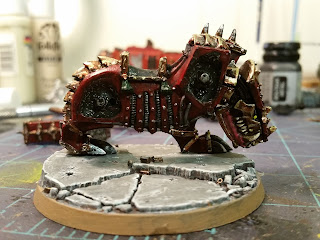 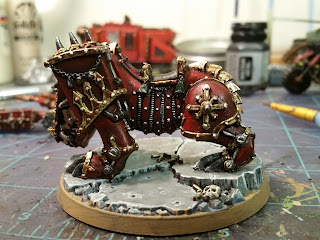 After that I attached the other two legs, however I was displeased with how these last two legs were attaching to the base, so I pulled the whole thing apart and redid the assembly. 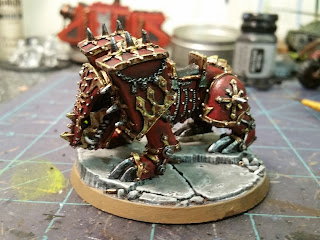 After reassembly I was still have spacing problems with the rear leg, it was just simply too high up and it was never going to touch the ground. After a brief brain storm, my solution came in the form of one of the Citadel Basing Kits that I have, in particularly the slate pieces with it. These acted as shims allowed me to fill that gap and solved the problem.

After I touched up the jugger, it was time to complete the rider. I painted him up to the level that the other World Eaters are at in my army. It was during this stage that it occurred to me that I did not have a backpack for him. Scouring my available bits I found a backpack from the Dark Vengeance boxed set. Tinkering with it, it not only fits the whole Khornate theme of the model, but it really works well with this model! 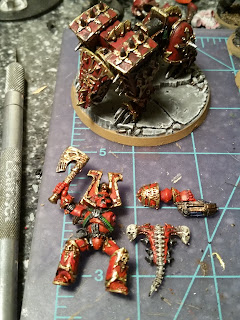 Once I finished the rider, it was time to attach him. And after a few bad starts, I got the model fully assembled and really to collect skulls! But enough of my rambling, just enjoy these next few pics: 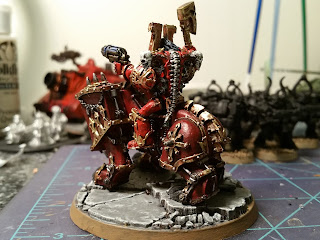 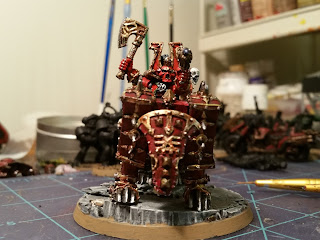 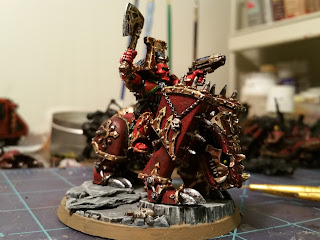 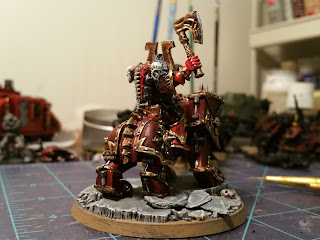 And with that, I now have a completed Warlord on a Juggernaut. In the background, you might have spotted a red rhino. That is actually my Vindicator of khorne which I haven't done any more work on since December. Worse, it took some damage during transport the last time I took it to a game (it's probably more fun to just blame those dastardly Ravenwing Bikers!) and I put it on the bench to not only make these repairs but to finish the model. 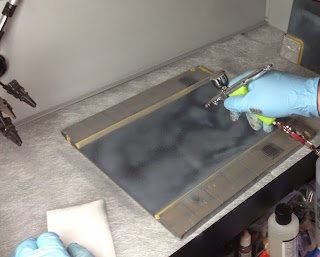 Dr TSG has been a busy fella. Over the course of many weeks he has been working diligently on his city terrain.

It started back in February of this year when I got a text message with a few photos that stated: "Got in 2 hours of airbrushing this weekend!"

The Doc has built an airbrush venting station for his his airbrush, and after many years of dreaming about it, he finally got a functioning airbrush studio-spot up and running. Of course, one must start off big with airbrushing right, and what better choice than to go with the some terrain!


The next pic shows the results of those first 2 hours on this project. 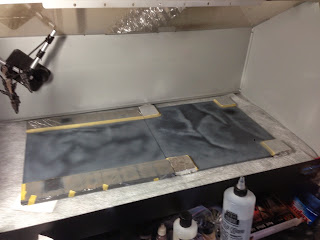 About a week later he sent me another message:
"Check out the further progress on the board tiles! I tried using an oil wash for the first time- it did a really great job of blending!"

The next few pics shows those results. I am unfamiliar with the oil wash of which he speaks and will try to get more info for you interested readers soon. 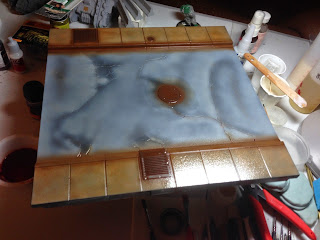 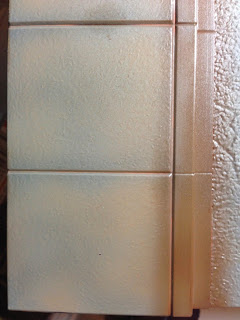 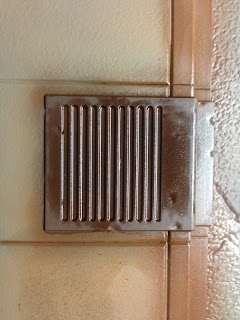 About a month later he sends me this pic. I have NO idea WTF if could be, as he does a lot of science stuff and carpentry and other things of which I lack any vocation in, so I had to ask what this was about:

"Working out spacing for my crosswalk template for urban streets. Will build on computer, then print out and cut cardstock master, then cut friskette from that to airbrush the crosswalks on."

"This (referring to the pic below) is what I came up with from that: The Cut-Out Template for my friskette so I can paint crosswalks on my urban road tiles."

He texted back and forth briefly regarding ideas for Imperial specific icons for roads and sidewalks, and aside from what little can be gleamed from the Necromunda games, there isn't much! He sent me a really cool link I would like to share with you: icons from Alien. Which in turn led to me telling him about the cool scenery Warlord Games sells for Judge Dredd. However, both Alien and Dredd would fit better in the early, pre-gothic, period of Warhammer, like the first few months of it's existence in the earliest days of Rogue Trader. However I can see these things working fine for Necromunda.

"So this is the final crosswalk template to cut friskette with. At most I will need 4 friskettes at a time." 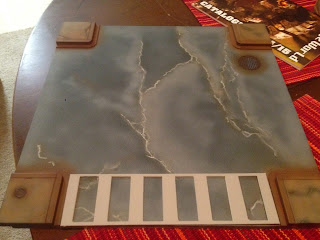 Another week passes...
Followed up a week later with: "Finally got some divider lines on my roads." along with these 4 images: 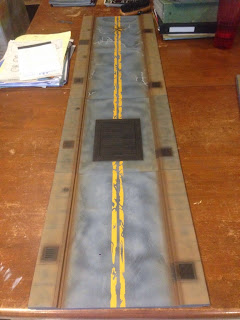 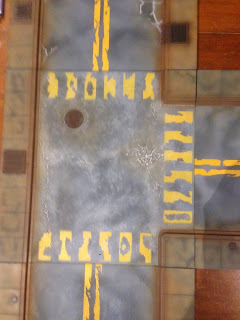 I really like the weathered look to the road paint, as that's pretty much what what all the roads look like in the part of the world that I live in!

He has sent me some more pics showing some of the terrain pieces, which I will save for a future post.