One of my local game stores holds a tournament for 40K on the 1st Sunday of each month, and I thought I knew the points needed for this past only to find I didn't have the points required in painted models. And obviously, at that time, my Chaos Bikers were not even close to being ready. So I had to skip that event. On my last visit to another store, Hobbytown, I decided to purchase a Daemon Prince that I could quickly assemble and paint, that perhaps I could use to give me some flexibility when it comes to points spread. 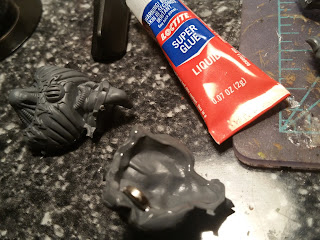 I immediately had the notion to magnetize his right arm so I could equip him with different weapon options for WYSIWYG purposes. In the pic aboveyou can see how I had the idea to put the magnet inside the body. 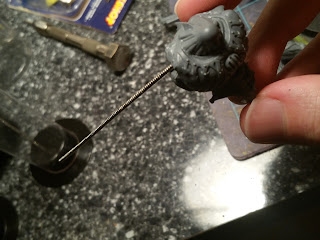 And although it tested alright, once I had a magnet glued to an arm, it simply proved to be too feeble of a connection to hold the arm. After much frustration, I decided to just abandon the idea. 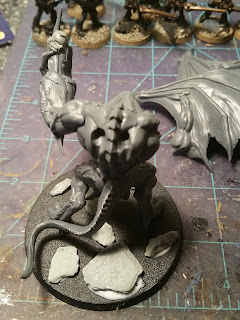 Moving onto the base, I proceeded to work up the idea he is on a shatter battlefield, yet tie it in with the bases of the other models in this army. Lot of big stones that one might imagine could have been part of a structure or a street perhaps? Regardless, I intend to have a few marine weapons scattered around to imply a recent fight that the Daemon Prince has won. 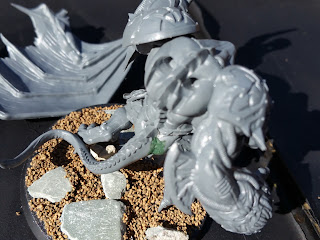 And the loser of that fight has his head being held up by the Daemon Prince. I like to think that the DP is perhaps speaking to the head.

Here the model has progressed and after the black primer was applied, I painted the fleshy areas with Scab Red  and added Terracotta paint to the base. 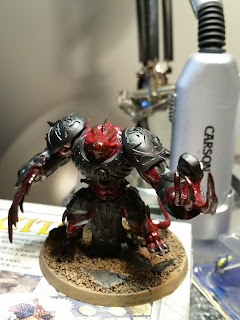 Next I added a Rusty metallic (Tin bitz) to the armor's trim. 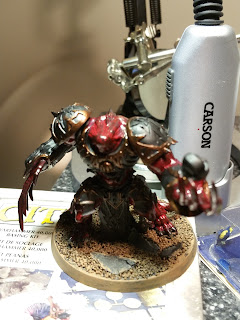 Here is all of the parts with the base coat, and with Mephiston Red applied over the Scab Red. 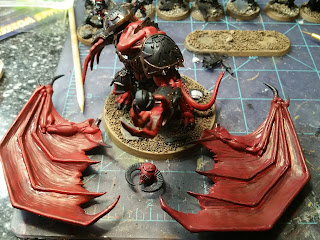 The rear of the model showing the Mephiston Red. 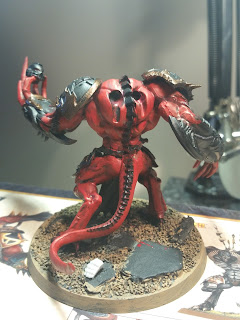 The inner parts of the wings was glazed with Bloodletter Glaze, and new color in the current Citadel range that I just acquired and I was very impressed with how well it pops out the colors. 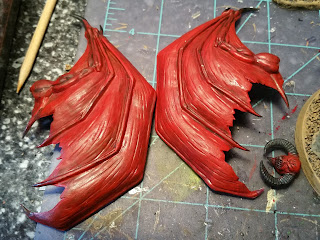 The rest of the model was washed with a combination of Black Ink and . I am shooting for the same color that I used on this Juggernaut that I finished a few months ago. 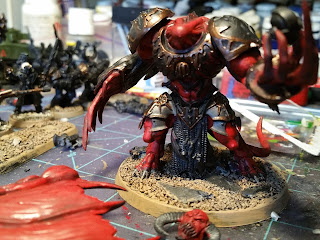 And this is my progress so far more updates soon!

Posted by neverness at Saturday, November 28, 2015 No comments:

I finally moved on to working on the rest of my Chaos Bikers and I have begun the process of repairing them.

Here they are awaiting their chemical bath, to be cleansed of the superglue nightmare that bound them together. I am using that purple stuff, Superclean, to remove the superglue. I let them soak in the stuff for a few days, but I'm convinced that the zipkicker abuse that these models went through will have to require more effort to get off. Luckily a few scrapes of an x-acto blade was all that was requried. 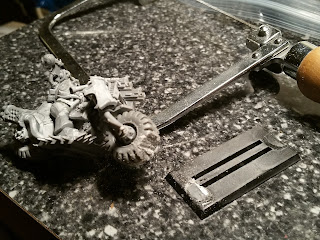 Unfortunately the builder of these models also went over board on the plastic cement as well, which the Superclean doesn't touch, and I had to resort to some drastic measures. Using my jeweler's saw I hack-sawed the square bases right off of them. Although some of the tires got a bit damaged in the process, when I am done with the model you'll never know the difference! 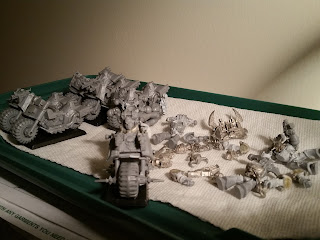 And here is the temporary waiting area for these bikes, in all their various bits and pieces awaiting for more attention from me. The original owners were horrible not just in the construction of these models, but in the assembly prep as well, and I am finding, and removing,  a depressing amount of mould lines on these things.

Next up, the rebuilding process...

Posted by neverness at Sunday, November 22, 2015 No comments:

A few years ago, the exact weekend the ork Fighter Bomber kit was released, I took it, and a handful of other models that I had that were awaiting their turn for priming, out to my poach and primed them. One model was an ammo runt, which I finished a few months ago, and the other 5 models were Fenrisian Wolves. The day was 6/3/2012. 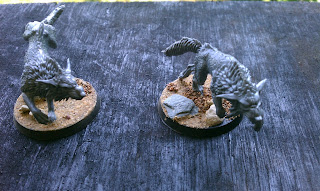 I figured I would paint them quickly since they consisted of mostly hair and should be easy to dry brush. 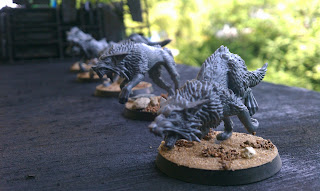 "Quickly" only applies however if you actually do more than simply prime them. Which I didn't, as I started on that Ork Fighter instead. 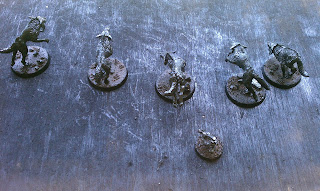 It didn't help much that in the first game that I used them, and every game since, they were horribly ineffective. (Examples: relic-fight, When-sisters-make-you-hot,  To be a Lone Wolf, and War-returns-to-Johnson-City.)

When my fiance and I went to Warhammer at Turkey Creek she bought me another box of Fenrisian Wolves (she loves wolves!). This means that I definitely need to get this unit painted up finally, especially now that they might actually be effective in the game as a pack of 10 models. I will try not to let their humble deaths in previous warzones interfere with their completion... and you never know it might even lead to me working on and playing with my Space Wolves again.

"Sven's House", is a clever nick-name for an Imperial Bastion that I built with a Space Wolves theme. This is a post that I simply forgot about. Not sure why, it just happened that way. So while reviewing some older posts I found a pic of this thing and remembered that I never actually wrote about it. I guess I was hoping to finish it, and then do a single post chronicling it's creation. However either I have lost some of the photos, or I just never took them to begin with.

This is one of those models that I painted on the sprue first. I painted it quickly and somewhat feverishly, and the assembly went fast as well. The first pic shows me beginning the process of assembling the 2nd level. 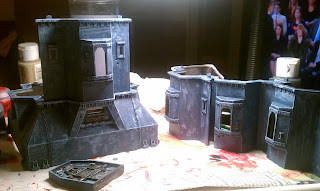 This pic shows my complete painting of the front door and the gun sponsons. 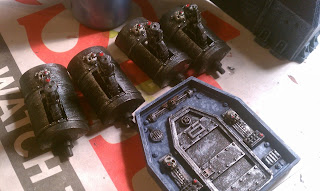 Next I assembled the 2nd story and used rubberbands to hold the whole thing together while the glue was curing. 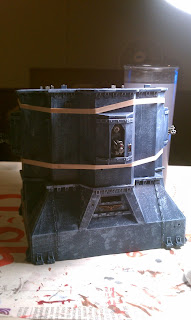 The top level was fairly easy to paint, and it makes sense to paint this model as you put it together, as there are some areas that are just easier to paint this way. 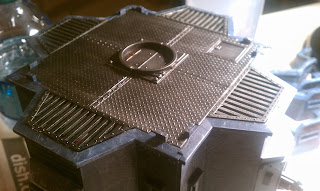 Finally the walls on the roof were added, and the whole thing has come together rather nicely. 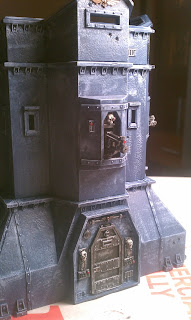 I am surprised that I don't have pics of one of the side joins that I messed up on and had to fill in with Green Stuff. No matter, it looks good now, and one really has to seek out this mistake 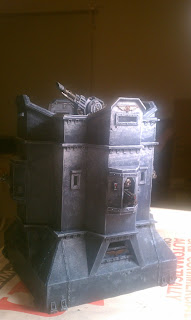 It has some rust streaks and a few other details, but other than that, I haven't done much with it. I used it in maybe two games, and I was grossly unimpressed, and even deflated, by the rules for it, and apart from a few photo shoots...

...it hasn't gotten much attention from me. I just preferred the rules in the original Planetstrike book, and rules for it in both 6th and 7th edition, have quite frankly, made the thing a point-allocated deathtrap.  So until the day that fortifications are able to fire at multiple targets, this model simply doesn't have rules based in common sense. Still, I like the model and I want to one day finish it.
Posted by neverness at Friday, November 06, 2015 2 comments: