Since I've been home from my latest work-trip, I've been painting all kinds of minis. It's an example in vainglory to try to get some of the single models off of my modeling station, and my focus keeps bouncing from night to night depending on just how much time I actually have. I have worked some on the Landspeeder Typhoon (almost done!), a Lone Wolf, some Death Watch marines and some Dark Eldar. None of these are at a stage that they're worthy of being presented in this blog.

I have noticed that one of my most viewed posts is An Update plus some-terminator-basing, which is quite curious considering how utterly uninformative that post really seemed to be on the matter. So I decided to work more on it and post pics as I go along. So if you will, consider that the preamble to this series. In that post I was quickly getting my Wolf Guard Terminators ready for a battle against the vile Warfrog by simply gluing the existing model straight onto the bigger bases. This, as you're about to learn, was never meant to be a temporary solution: 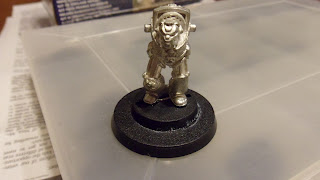 In the pic above you got a Terminator just as he was on the day I glued him to the base. Pretty much ready to go to step two. 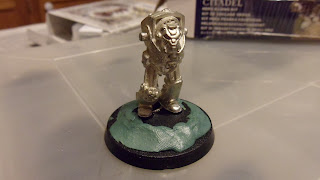 This is Step 2, at least for this model. I applied green-stuff to the lower 'tier' and smoothed it out so the 'tier' effect went away to replace it with a 'mound' effect. By the way, this is a Rogue Trader era model, when GW finally figured out what they wanted the Terminators to look like. He's the Heavy Flamer model. 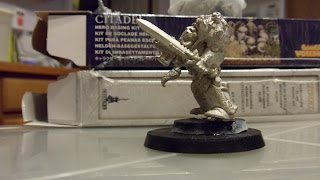 If you look at the feet of this Terminator, you can see that his feet have these really extreme gaps between the model and the base. Instead of bending the feet or just filling in the gaps, I decided to just get creative with that void... 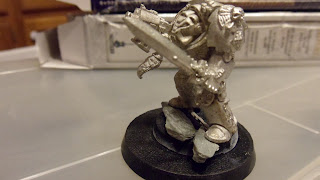 So using the pieces of the thin slate/shale piece that came in a basing set that GW sells, I was able to find pieces that fit the gaps perfectly. These were the 1st two pieces, you'll see below (in the background) that I continued to stack more rock all over this base. 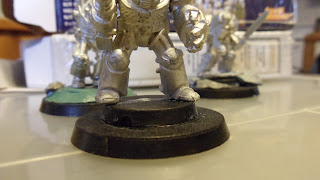 Here's another example. I swear looking at these models, it's surprising they didn't come up with putting the Terminators on bigger bases back in the beginning. Check out how the sides of the models feet hang off of the slotta base! 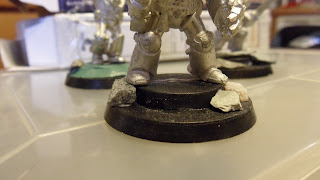 This was easily fixed by just adding some appropriately sized rocks! 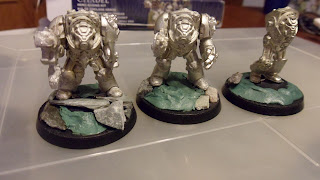 So, after adding rocks to those models, I applied the green stuff to minimize the 'tier' effect between the two bases. For continuity purposes, I added a rock to that first model. 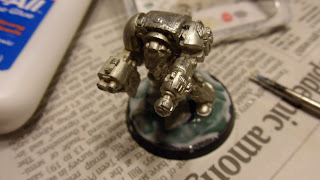 Had some extra green stuff so I did a 4th model, a Cyclone Missile Launcher Terminator. Once the green stuff was applied I mixed up some Elmers Glue with water and brushed it on the base. 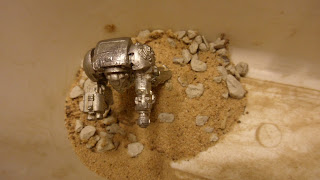 Then I dipped it into this sand tub I have (some rocks got mixed in a while back, no big deal though), shook the model around and presto: a sanded up base! I this a light sand that I get out of a spring-house on my folk's property here in Tennessee. It's very fine and collects on a stone slab when the springs flood.  Having said that, you can either find it in nature or buy it. It's just sand. 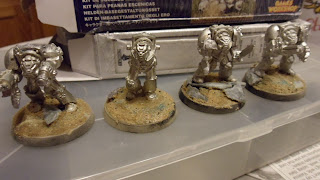 Here they are all lined up. However I like a bit more 'depth' to these bases, especially when the green-stuff shows through as that is the sand most likely to wear off. 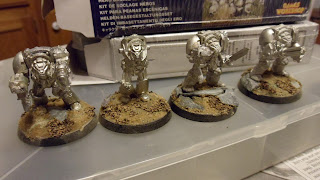 So I apply glue to those spots, and dip the models again into a bag of bigger grains (these are really, really small stone bits I got from a local hobby store). And the pre-painted stage of this project is done!
Unlike many of my friends and apparently 'the pros' out there, I do the bases before (usually) before I prime the models. Nothing annoys me more than having a finished model that I'm really satisfied with just to get paint all over it's legs while I'm trying to paint the base. It's just strange to me to it like that, plus doing it that way sometimes gives the appearance that base was an after thought, an pedestal, or some other secondary prop, whereas I like to think that I'm giving the illusion that this model is one piece that's connected to this little piece of environment. It almost helps tell the model's story. ...perhaps I over think this stuff! LOL...
...anyway, look for part two, and additional updates to the series's that I have, in the new year! Have a Happy Holidays! ﻿
Posted by neverness at Saturday, December 24, 2011 No comments:

Pods to Drop and Lands to Raid (and Speed) pt.9 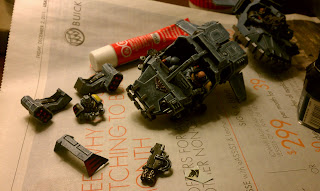 Here I am on the road for business, and I have my Portable Neverness kit with me. Today I found time to do something with these minis. I worked a bit on the Landspeeder Typhoons. The one in the rear in this pic I tightened up the base coat, but now I'm contemplating ripping the crew out of it like I did for the one in the foreground. In short, I added a thin Skull-White highlight on the Space Wolf Gray top-coat, finished the pack marking on on the rear support, highlighted the black on the on the Multi-melta, and applied some more decals. 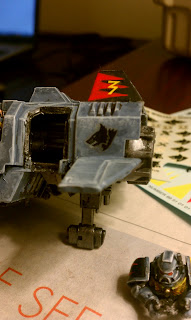 Here you can see the highlight on the gunner, and the decals (the number on top of the pack marking, and the Chapter symbol). I really had to resist painting that field yellow, deciding to not go all 'retro-2nd edition'. Maybe on the next one...? 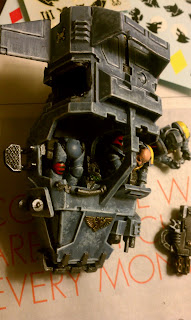 Here is a view of the main hull with the white highlight. I'm having difficulty liking the angle that the multi-melta will sit once it's mounted. A friend suggested I just clip off the 'U' shaped mount and let it lay a bit lower. So, the only things left to do to the model is drill a hole for the ball joint (the original owner filled it in! Gah! I JUST noticed this! and I don't have the pin-vice with me), and finish painting the flesh on the pilot. And probably touch up his chest plate. I could have glued on the missile launchers tonight, but I'm not sure how well they would survive the trip home (remember, these are the original metal ones!). There were a few other details I wanted to hit, but hotel lighting generally is not fitting for miniature painting, and even with moving lamps around (haha, roomservice might hate me tomorrow!) it just wasn't as good as being at home. I did like the hight of the table and it was nice on the back, which has me thinking about making some changes to the painting station at home.

Ok, now finally, after 9 posts, we have progress on the Drop Pod #2. I've been hauling the box around for months and dabbing paint on the sprues ever since my first blog showing off the 'Portable Neverness' kit. 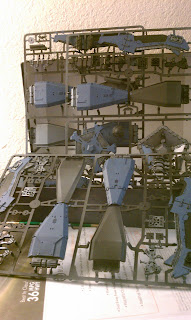 This was how I did the 1st one (see the 1st post in this series) and the Land Raider Cruesader (BTW, I've been working on the sponson Las Cannons as well, but just didn't think they were picture worthy yet). I just paint the components on the sprue so as not to lose anything and for better handling. I just finished the base coat early, and will soon move on to the mid-coats.

That's it for now!

-Neverness
Posted by neverness at Sunday, December 04, 2011 No comments: