I am in the middle of moving, so all hobby activities are at a stand still. More accurately, the hobbies have all been packed up and put away. The first stages of my move was cutting out the protective foam for my Orc & Goblin army's carry-case. Something I regret that I didn't do sooner. As organized as I like to think I am, this move has taught me that I need to be better at it.


In the man-cave is a closet that is stuff full of unassembled models. It really is a shrine to geekdom, and a museum of GW products. Some of these I broke down and condensed, and I will probably do it again after the move. All of those Star Wars and D&D boxes were emptied out and the minis dumped into a box, again, for space reasons.


As you can see I have a lot to move! 25 years of being in this hobby, and I rarely trade or sell off stuff, has caused me to acquire quite a bit. And yet I want more? What's in this stuff to make it so addictive?!

The bit bins above my painting station took some thinking. I have moved these things in my previous career, and if you don't secure them right, the drawers will open or stuff will fall out of the back of them. I went through these this past Friday night (stayed up until 3am) bagging all of the bits in snack bags. The next morning my dear friend Redbird came over and plastic wrapped up the bins for added security. That Redbird sure is swell!
After a day of solid packing, here is the paint station:

The bonus lesson here was allowing my Dad to pack my Orc Fighta Bomba into a Walmart gun case that I had on hand.... 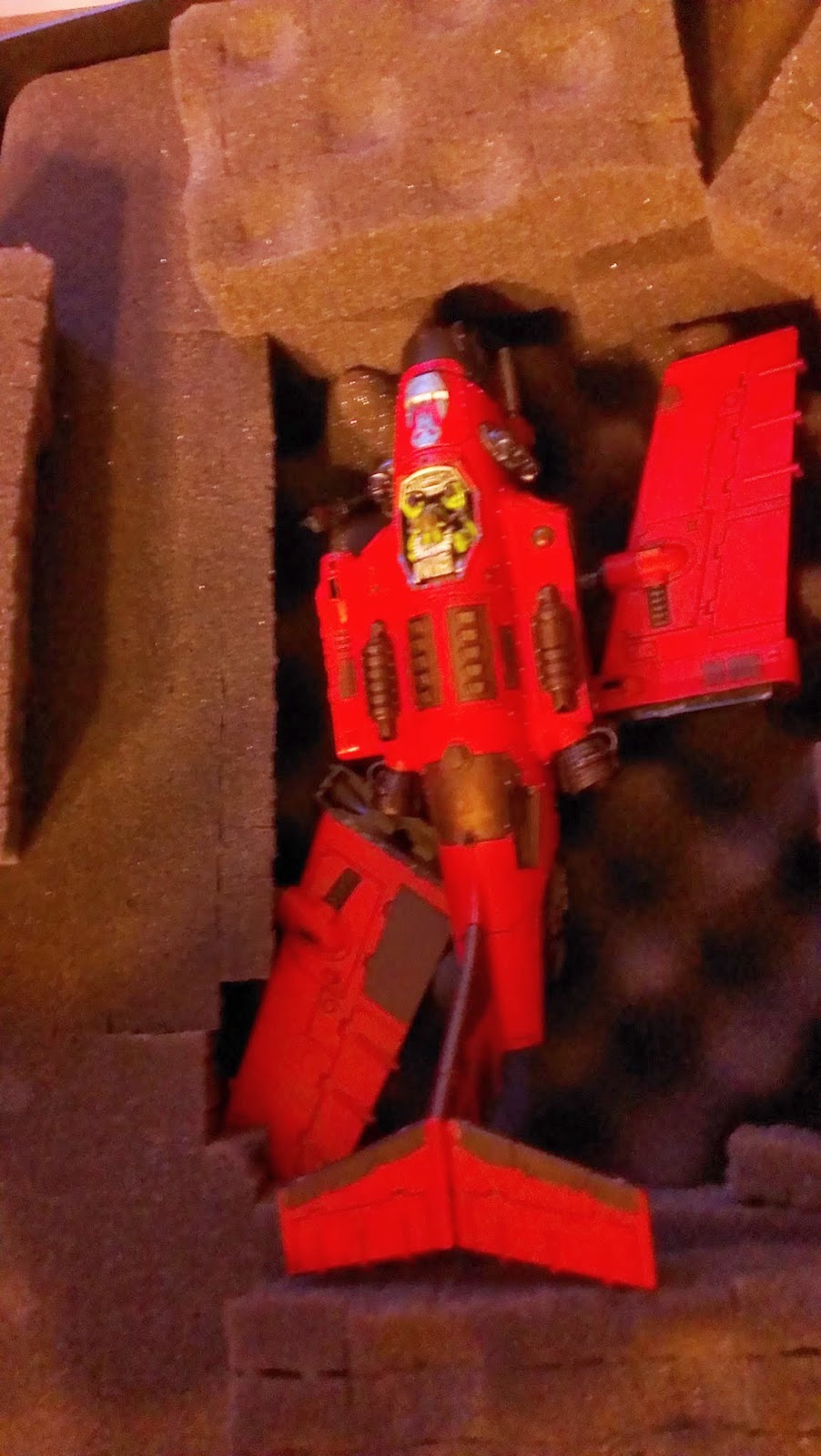 ....the road to heck is paved with good intentions! LOL, it's all good though, as the model wasn't finished yet and I can easily reassemble it.


This move is well underway, eventually I will show you the next incarnation of the man-cave.

"Maybe the Carnifex ate your baby?"

-Baby Land Raider that is!

OK, I can finally chronicle for you the first (and so far only) game I've been able to play against the new Tryanid codex. You know, the one that's supposed to be worthless due to all the nerfing, gutting and over-zealous power reduction? This was Warfrog's first run with it as well, and we were itching to see what they would do. Warfrog has been playing 'nids since the 2nd edition Codex, and so knows them inside and out, but he wasn't too keen on having to adhere so sternly to the synapse range again. Never-the-less, we threw together what we thought were good 1750 point lists and decided to see what would happen.

I have always wanted to play a classic and fluffy Ultramarines vs. Tyranids game, and the new Space Marine Codex felt like it would lend itself well to this, especially now that the ridiculous "win button" choices have been ether eliminated or had their power reduced in the new 'nids book. Or so the internet would have us non-bug players think.

I must disclaim here that it has been close to a month (February 1st and the wee hours of the 2nd) since this game was played  and I have simply been too extremely busy to post this, so what will follow will really be an over-view explaining the pics more so than giving a detailed play-by-play that I typically give, but still, I think this will be a better "battle-report" than that lame excuse that was in Warhammer Visions a few weeks ago... (and yes, that rant is forthcoming!)

As fate would have it, we rolled 'Purge the Alien' for the mission, and let's face it, is there a better mission to flex the proverbial muscles of a new codex against? Well I set-up first, and I will state now, I will pull no punches against myself here, that this was my biggest tactical blunder of this game. I deployed by stretching my army rather thinly against the length of my deployment zone, and since we were playing long-edge vs. long-edge, this would greatly limit by ability to focus fire on specific units. I guess where I am very used to playing objective games that I have come to instinctively set up like I need to go somewhere.

Due to the terrain being unpainted, as well as the bugs, the majority of these pics will be in blank and white. Personally I think these models look great in black and white, and look a lot less like toys and tad bit more "real" if you know what I mean.


I did take the occassional color pic so you can pick certain details. In this next set-up shot you'll notice some green patches which we use as area terrain for "woods". Warfrog and I discussed the pros and cons of this during the game, particularly in regards to true-line-of-sight, as having a physical woods there would greatly inhibit target selection. Regardless, this worked for us, it worked as we know that shooting through it would provide a 5+ cover and that moving through it would require a best-out-of 2d6 roll (except that most of his army ignores this restriction).


The first round had night-fighting in effect and with two Venomthropes also present ment that the nids had some serious cover saves. I think I might've  killed a few Termigants, but the Tervigon quickly replenished them.

On the Tyranid turn one however, we got to see how the Biovore, along with the barrage rules, work in the new rules. The next pic shows what's left of a 5 man combat squad after feeling the love from that attack. We were both impressed with this, and it's been a long time since either of us have seen these kind of results from the Biovore (probably not since early 3rd ed?). The new spore mines are a bit of a pain to have to deal with as well.

Most of my army stayed still, to maximize fire power. However, my thin deployment strategy was hampering my army's ability to concentrate fire, and those Venomthropes were making my efforts to clear out the little bugs very difficult. I did manage to take a wound off of the Hive Tyrant though, and put a few on the Carnifex brood.
On Turn 2 the Legion of the Damned arrived, however they scattered very far away from their target. I was still within range of the Venonthrope I wanted dead, and with their Ignores Cover bolters they eliminated him quite spectacularly giving me the First Blood Secondary Objective. The Hivemind wasn't pleased with this new nuisance.

So far I was pleased with the new rules for the LotD.

Now, I was really putting some precious Faberge Eggs into my proverbial Easter Basket, and I really wanted to get them into combat. So, I jumped the Combat Squad with Chaplin Cassius out of the Land Raider and put them into the ruins. The only reason to do that was to slow down the inevitable Tyranid assault, as all the stormshields in this unit made the cover irrelevant. So they jumped out and missed almost every shot that they fired. And, despite those cute combat doctrine tokens I made awhile back, I still manged to forget to reroll my misses with this unit!
The Hive Tyrant moved up, it looked like we were going to have an epic showdown, until the Carnifex Brood walked up with their pair of twin-linked devourers...

Blasting the whole unit away and in conjunction with the Hive Tyrant's Psychic Scream leaving only the Chaplin left with a single wound!

Of course the Hive Tyrant charged Chaplin Cassius, and I got to discover just how badly nerfed the Crozius Arcanum has become since the last time I ever used one. Needless to say, it was a rather disappointing showing for this guy's first game, but sometimes the dice gods say "NO" and choose instead to feed a Hive Tryant. The Warlord Secondary Objective goes to the Nids. Oh, and the Hive Tyrant regenerated the one wound I have given around this time too.

On the next turn, I backed up the Land Raider as I was too close to make use of my full fire power. I believe however that all I accomplished was giving a Carnifex another wound, but not enough to eliminate one from the game.
The Hive Mind chose to pig-pile the LotD with about 30 Termigants, with the Tervigon producing another squad to back it up in case the LotD managed to prevail. They did win the combat, but being within synapse range prevented the 'gaunts from doing anything put piling in deeper. (Suddenly, I missed the 5th ed "fearless saves" rule! LOL).
The Carnifex Brood caught the Land Raider, and blew it up. Amazingly, the resulting explosion killed the wounded one.
The hive tyrant paid a visit to the far left combat squads, both of which had been horrible reduced by biovore attacks.
My Sternguard had spent the whole game so far in the cover of a woods with the Librarian, mostly tearing up a squad of Hiveguard, but when things finely got within range of his psychic powers, I rolled a double-6, and immediately wounded the Librarian! I assumed he was thoroughly pissed off for loosing his Warlord status, as when I activated him, he didn't want to cooperate! LOL!


In a suicidal effort I had a combat squad dash out from cover and wipe out a Termigant brood.
And suddenly, the defense collapses, and the Legion of the Damned's invulnerable 3+ armor save fails, bringing an end to their incursion. On the other side of the table, the Sternguard also collapsed to the swarm, as well as the Librarian, who managed to live long enough to fight two Close Combat rounds before dying. In his last melee, he decided to actually halfheartedly fight and kill a gaunt, but jeez, what a waste of points he was in this game!
Well, the Librarian fell, and the Hive Tyrant took the Whirlwind as a consolation prize, which he spent the last round dismantling it.
So I was completely tabled by the close of Turn 6. Warfrog of course, still thinks his new Codex is weak, to which I half-jokingly replied that it was because it took him 6 rounds to table me vs. the traditional 3 rounds. BTW, I think the last time I was tabled was also by Warfrog and with a totally different army  Regardless of the tabling we tallied up the VPs just to see how much I gave him: Nids 13, Ultras 3.
Eeew.

So, what did I learn from this game?

Fun game, and I was more impressed with the new Tryanid Codex than I thought I would be, at least this particular army build anyway. I'm sure we'll play again with other builds soon.