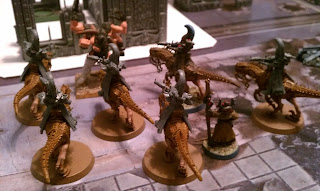 Actually being home on a weekend with no other plans, I seized the moment to see what Da Masta Cheef was up too. Turns out he was available and we agreed to a 1225 pt game, to which he chose to deploy his Exodite Eldar. Having never had the chance to battle against this warhost, I decided to return the favor and not use my status-quo armies or armylists (Space Wolves or Orks) and instead use one my smaller armies. I chose to field a Daemon army, as I have never used the codex before and wanted to give them a spin in these waning days of the 5th edition. Plus I recently put the only finished model in this army in my display cabinet and he’s been whispering dark thoughts to me ever since…


The 1st thing ye might notice, is that my Daemons are all very old models. I have a lot of the newer ones, just not assembled yet. I have opted to keep them on the square bases, as this doesn’t seem to make a damn bit of difference in 40K, but a huge difference in WHFB, and I want the option to use this army for both systems.


Expecting to have to quickly build a few boxes of plastic models, to make up for deficiencies in the army list, I was quite surprised to discover just how expensive these units are! In fact, I had to leave some models behind including the only painted model in the army (Skippy the Bloodthirster) as I decided to go to a theme. Knowing that I was facing elder, and having recently read up on Slaanesh’s…um, relationship…with the elder, I decided to stick with a Slaaneshi theme for the most part.


So here’s what the dark gods mustered for my warhost:


I came up with the name She Who Milks while sticking the cow head onto my old-school Keeper of Secrets. Must’ve been the teat, and the words ‘She who Thirsts’ echoing in my head after reading Path of the Renegade.  Knowing that Da Masta Cheef and I share a similar twisted sense of humor I ran with it!. (update: here's his exodite list for this battle. )


Assembling my motley, unpainted Daemon host, it was off to the mortal realm of Bristol, where the unsuspecting souls waited to be harvested…


Speaking of their unpainted condition, and to dive a bit into the history of my Daemon collection,  I must touch upon the origins of my chaos collection. I was introduced to Realms of Chaos in art school. Two of my roommates had the books, the original tomes Realms of Chaos Slave to Darkness and Lost & the Damned, and I was sucked in by the amazing art and stories contained within. Understand that this was ’94, and although I had been a 40K player since January ’89, I really had no idea that these books contained so much 40K info. Well these roommates and I started a Friday night Realms of Chaos campaign, and I quickly found myself with a small Nurgle army. In fact that roommate’s paint jobs are still on the Nurgle faction, I just never got around to cleaning them up! The only model that I put any paint on is the Keeper of Secrets, and that’s only base coated.


Fast forward almost 2 decades later, and here I am with more Daemons than marines (count me in with the legions of players who dislikes the current Chaos Codex –they took away my daemons!) but for some reason, I just never tried to play with Codex Daemons; until now! Perhaps it was the indecision about the bases? Or maybe I was under the assumption that I didn’t have enough models or something? Who knows! All I know is, that I have a surprisingly big army just waiting to terrorize denizens of the 41st millenium!


It was an objective battle and Dawn of War. The Exodites had left the security of their Maiden World and were investigating the ruins of an Imperial settlement. Clearly something was not right here… soon the forms of Daemonettes  of Slaanesh, Pink Horrors fo Tzeentch and a Keeper of Secrets, the unspeakable She Who Milks materialized into the mortal realm to claim these unguarded Exodite souls. 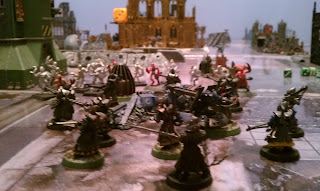 I quickly learned about the quirky nature of daemonic materialization. !st lesson, don’t put your models that can’t shoot directly in front of the guns! In this pic you can see the Daemonettes standing firmly before the unit of guardians. As you can see by the final pic, I was down to the one Daemonette, and figured I would charge in. I got some kills, but they beat her back into the warp. 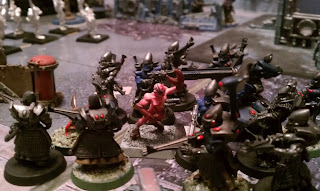 She Who Milks made quick work of this unit here, and feasted unquenchingly on the soul of the Dire Avengers and the Exodite Farseer. 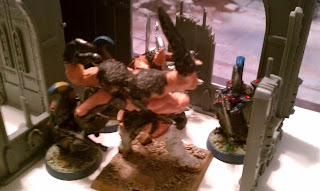 Not before they blade-stormed half of my Pink Horrors away (surprisingly good shooting attacks those horrors have BTW). I consolidated She who Milks into this cover 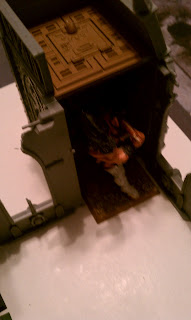 (in hindsight, a bad idea) as the wraithguard, represented here in the form of guardians on cold-ones (hey, they’re not Exodites without their lizards, right?) came onto the field.

They were able to spot her and blasted away 3 of her wounds! Enraged, and probably a bit turned on actually, she jumped out, used Pavane of Slaanesh to pull the exodites closer, then charged in and butchered them all! It was that or be shot to death, right? On the next round, the Warlock was crushed by the love offered by the nurturing bosom of She who Milks. 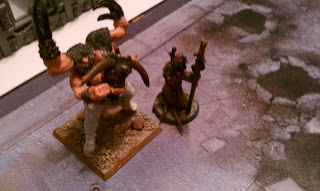 During all this (and I didn’t snap photos everywhere as I wasn’t planning at the time to get this in-depth with this battle-report, after all my minis are unpainted! But I digress) the unit that we voted the MVP of the Exodites, the guys who shot and tore apart the Daemonettes, blasted away my Flamers of Tzeentch, returned to the objective and shot away the final wound of She who Milks! Screaming with orgasmic joys, she was shunted back into the warp on a carpet of fresh Eldar souls. My Plague Bearers had arrived, took out another squad of Guardians before plunging into this MVP unit and eliminating them. 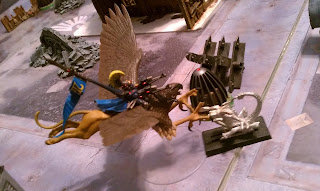 Over on the other side of the table my Fiends of Slaanesh (or Friends, as Cheef’s Swooping Hawks were to discover that they were) had been whittled down by a lot fire before killing the Swooping Hawks and being killed themselves by Cheef’s Autarch on Jetbike –ur, I mean, Griffen.  The Autarch was killed by the only accurate shot fired all game by a Pink Horror with Bolt of Change and destroyed. 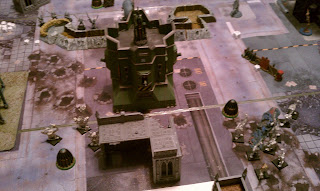 So here it was, a game I thought I would lose when it started. My die rolls were terrible in the 1st few Rounds while the Cheef;s were strong. But we reached this point where I had 2 scoring units on objectives and he had no scoring units left. The Swooping Hawks quickly blasted the Pink Horrors away, before plunging into the Plague Bearers to contest it. I killed a good number of them, but this is how turn 7 ended, as a complete sprawling melee, other wise known as a draw! 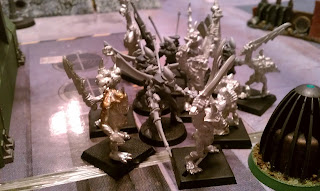 It was a good, and exiting match, and fun 1st outing for my daemons. I would like to try them again, and build the rest of the army. It’s fairly small army and ought to be quick to paint, but with my time so limited I think I will stay focused on the Wolves and the models on my painting table for now. This also serves as great show case for Cheef's brilliantly painted models, and I hope he's inspired to expand this army a bit more (I think he needs Rangers, they fit well with the Exodites and are supported by the background. And they kick ass!)