Having been snowed in these past few days, it was actually easy to find a bit of hobby time. So much so that I have completed my big bad-ass Black Orc Warboss. I think I like 'Stompface' as a last name, but I am still working on a first name. Anyway, here are the the final steps:

This next pic shows the level I painted this up to prior to gluing on his axe. At this point I thought I was pretty much done.

As you can see all bone bitz are now done, as are the countless metallic scratches and scuffs.


And a close up of the model mostly done. Again, for those interested, the goblin flesh tone was finished by using Applebarrel Kiwi, with a final highlight of Sunburst Yellow. I couldn't tell you what the modern analogs are for these colors in the Citadel paint range. 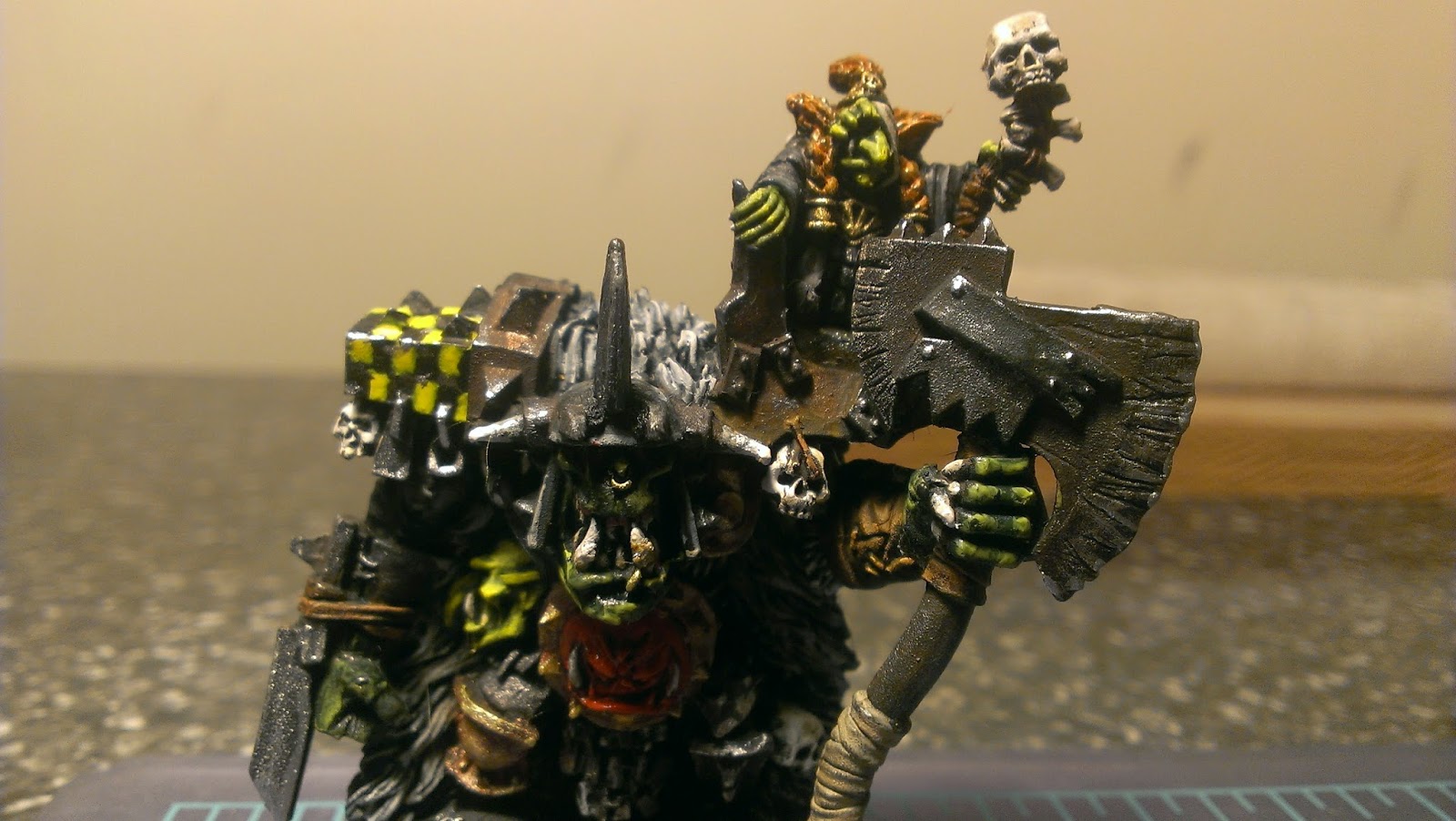 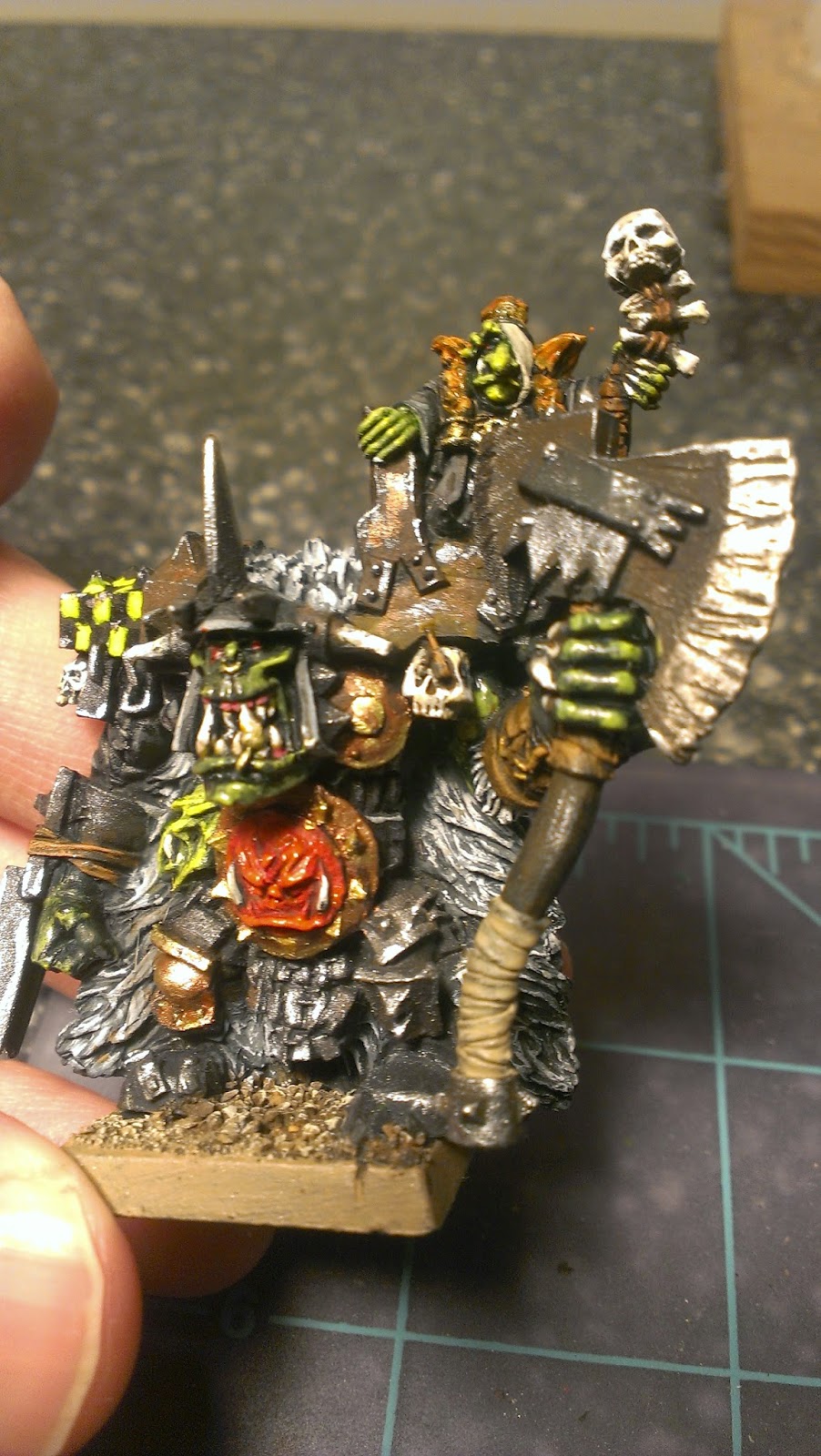 As you can see, I thought it was done, but it needed...something.

Yup, and I decided he needed it on his punch daggered fist! I like the idea of him wrenching his fist around in some defeated foe's guts. The Axe needed some blood as well, but just a little. After I painted the blood on, I just had to touch up one more thing, and that was the banding on the axe handle.

And with that, he's done! This pic and the first pic show the completed model, complete with flock but minus the matte finish (it's too cold out to spray). Again, thanks to Edwin for gifting this model to me. 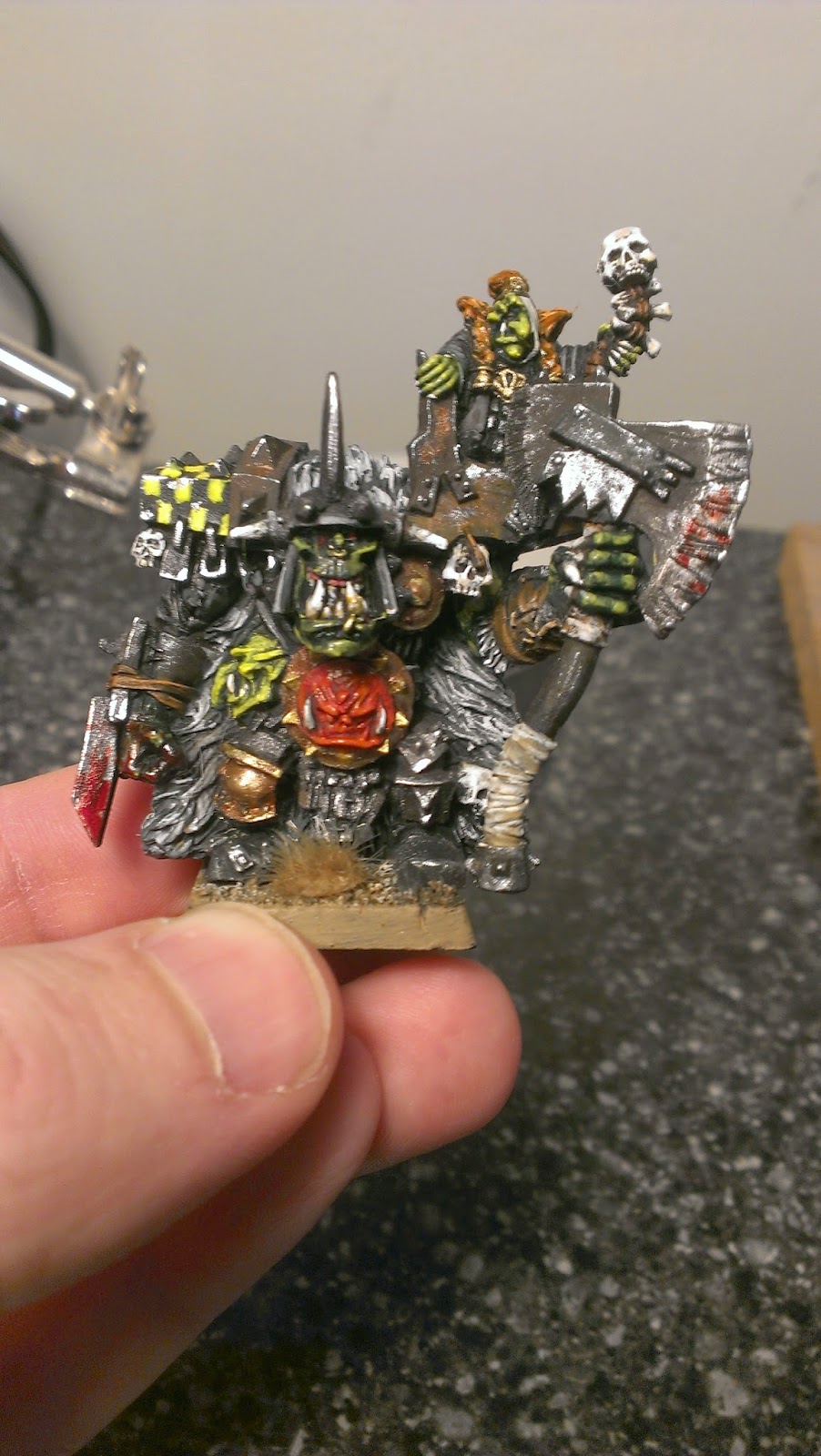 So, with him done, I was feeling inspired, and a tad bit mad with cabin-fever, so I pressed on with the Arrer Boyz for this army. Look for that post soon, but 'ere's a snippet to see what I'm up too!

I'm still involved with my move to lovely Unicoi County ("Here, 'mud' is a season!") and my hobby projects are in disarray. But I did manage to get a bit of painting done the other night on the Warlord of my Orc & Goblin Warhammer Fantasy army. It's been awhile since I worked on any of these Orcs, having been working on Khorne stuff and Bolt Action, so it was nice to get back to something in it's final stages then working on stuff in it's early or middle stages.

So, progressing from the previous post involved with this chap,


Really it was just a matter of tightening up the yellow and black checker pattern on the right shoulder plate. This was a bit more challenging than I should have allowed it to be, but I am starting to like the results. I will scuff this up soon with dings, chips and scratches, which I hope will 'orc' it up a bit more. 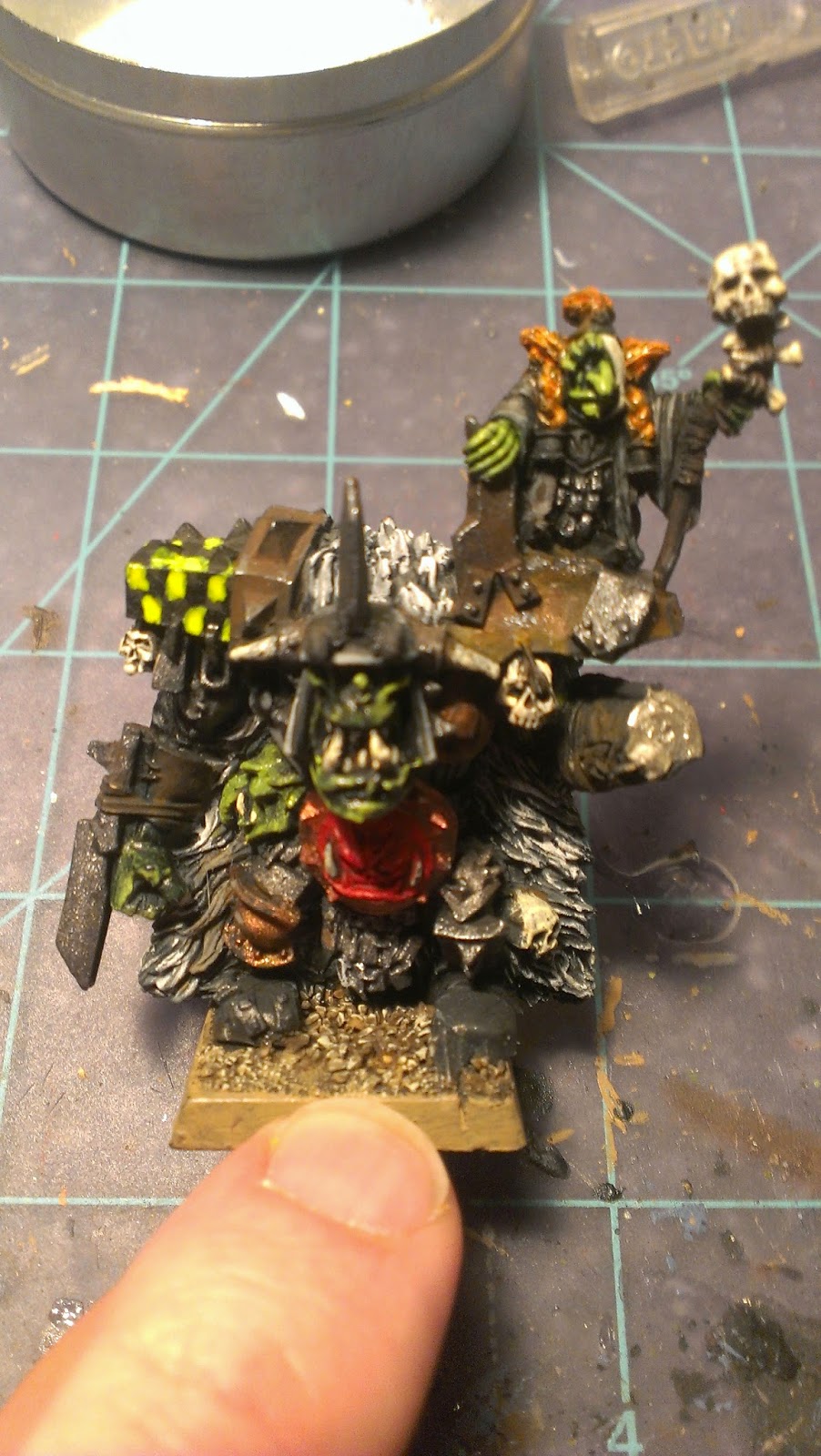 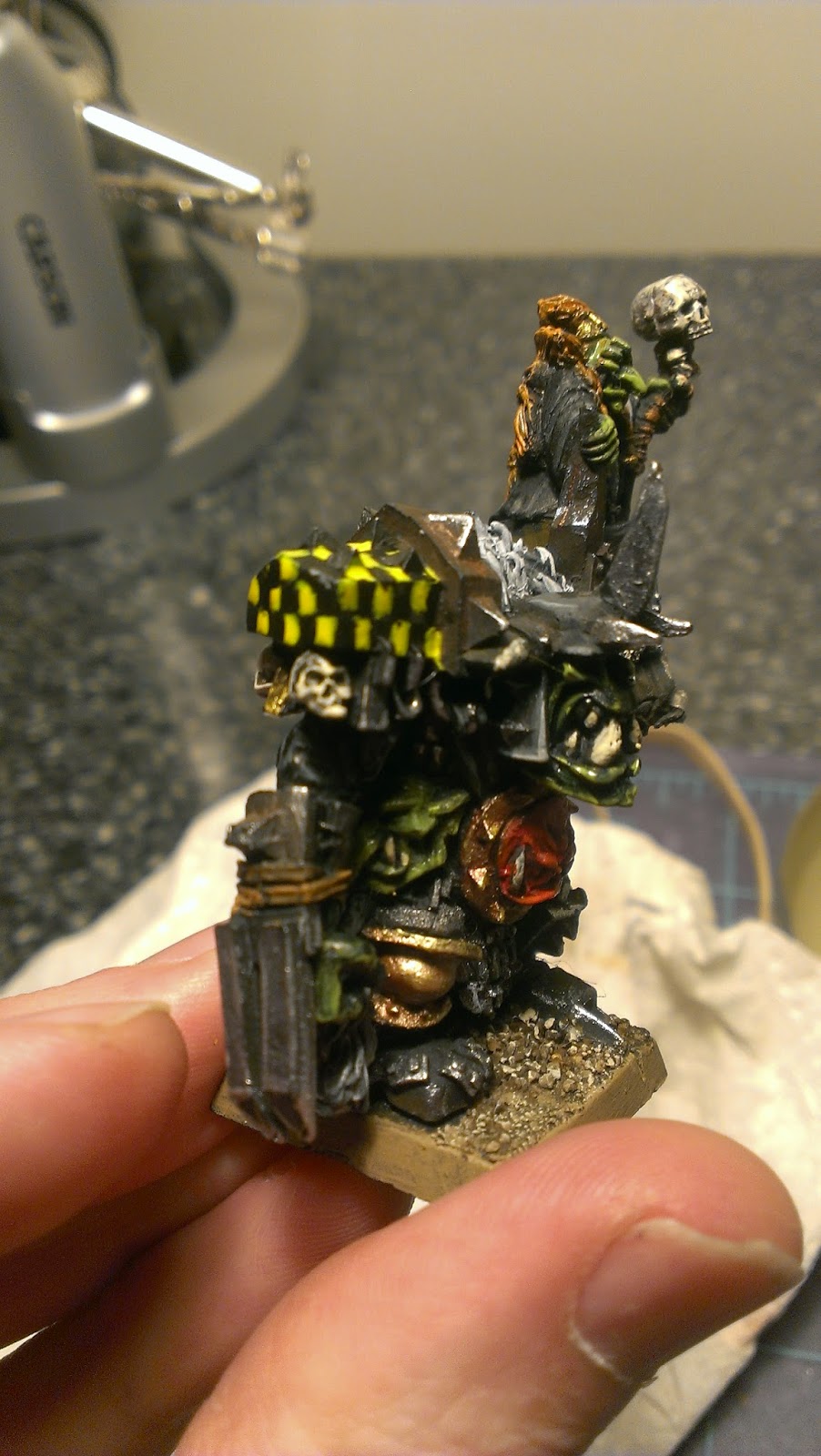 And lots of metallic painting! Blades, armor, spikes, rings, etc. As you can see, this model is heavy with it! Also I painted up the Evil Sun gut-plate to a level I think I like. 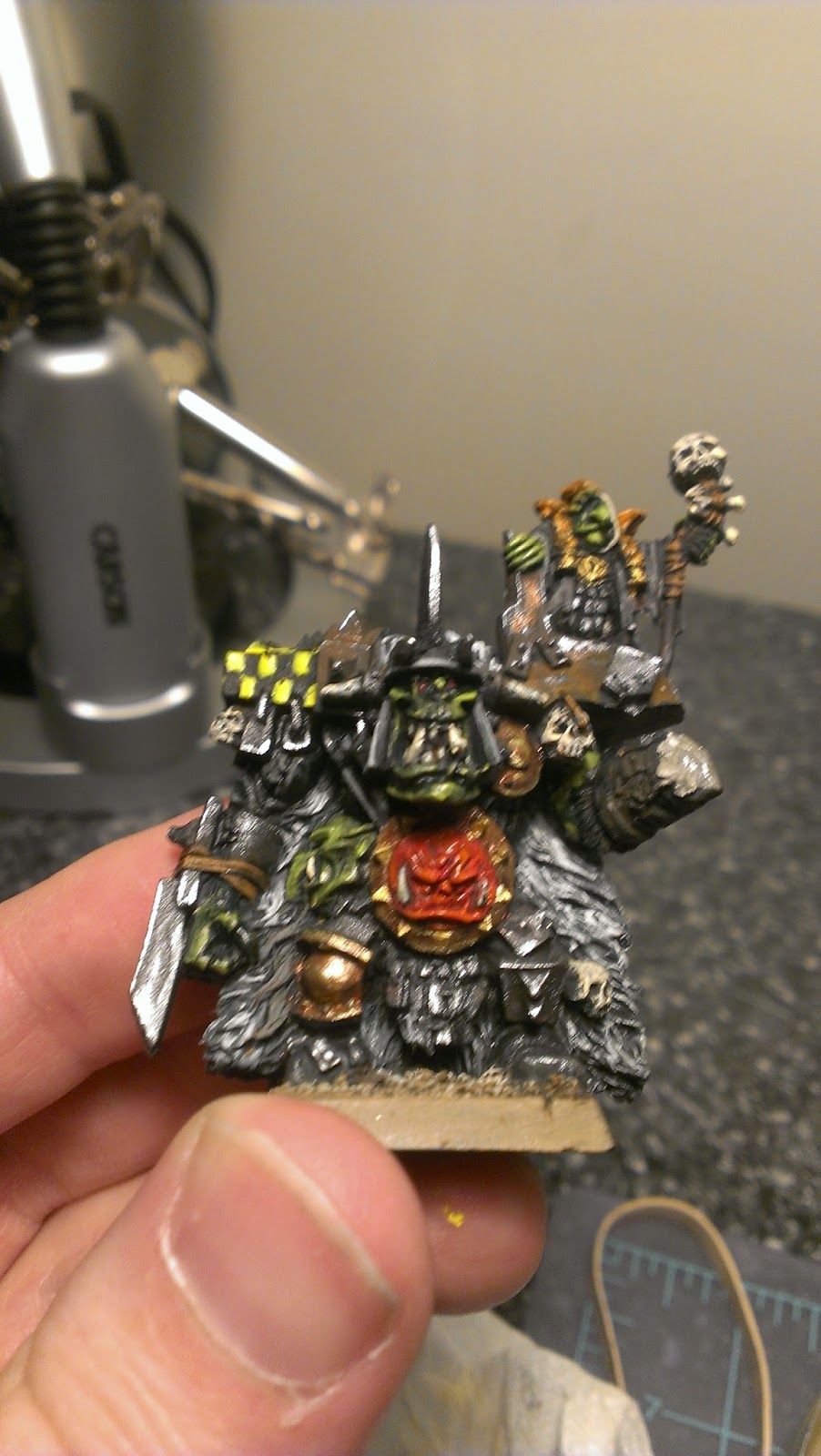 The next steps are to complete the painting on the axe, as well as any bone or tooth bits, and perhaps more highlights to the leather straps that this guy has wrapped all about him.


I know, a short post this time, but progress is being made! Now to get back to that move...