Attack of the snotlings! 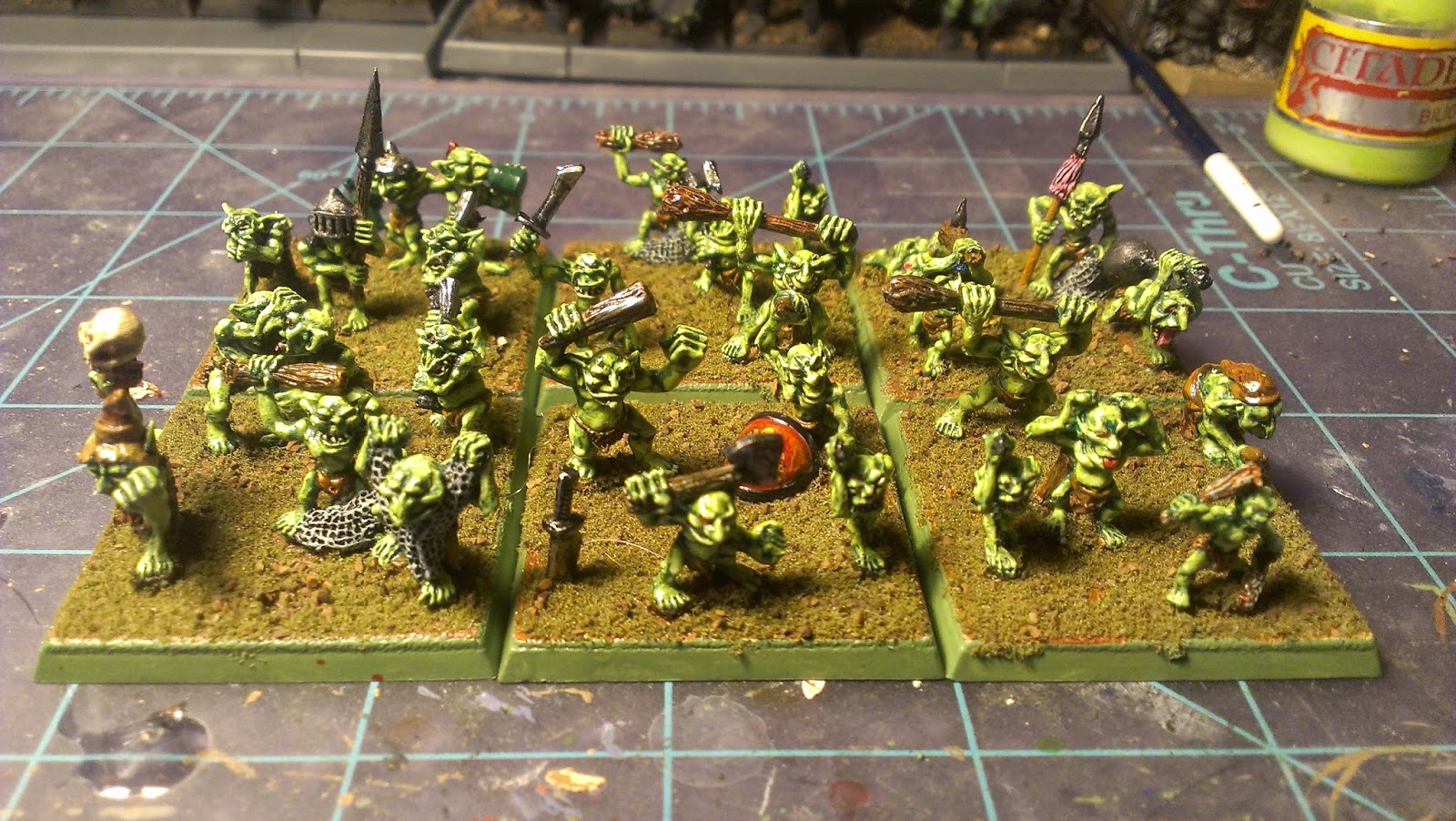 These models were painted back in the late '90s. Toward the end of 40K 2nd edition. They were originally intended to be used as ammo for the 40K 2nd edition Ork Codex as living ammo for the Shokk Attack Gun. Now, as they are no longer required for that role (nor have they been since around '98) they will see the table top as additions for my my WHFB Orc & Goblin army.

My painting techniques for gobo/ork flesh as evolved over time, mostly due to the fact that my one bottle of original Bilious Green can not paint all that Orks, Orcs and Gobos I still have to paint. However these little buggers are perfect example, perhaps the apex, of my original technique. My original base coat was an original Citadel Color called Woodland Green, which I then covered with a thinned layer of Bilious Green, then a solid coat of Bilious Green, before highlighting with a Bilious Green with a dab of Skull White mixed in. It worked very well but I found it time consuming. My newer technique produces similar results, but with a yellow a final highlight.


In order to maximize my models, I tried to limit them to five snotlings per base, with the paired models counting as two each. For example this model has two drunken snots passed out pissed drunk and tangled up with each other, with one face down in vomit! 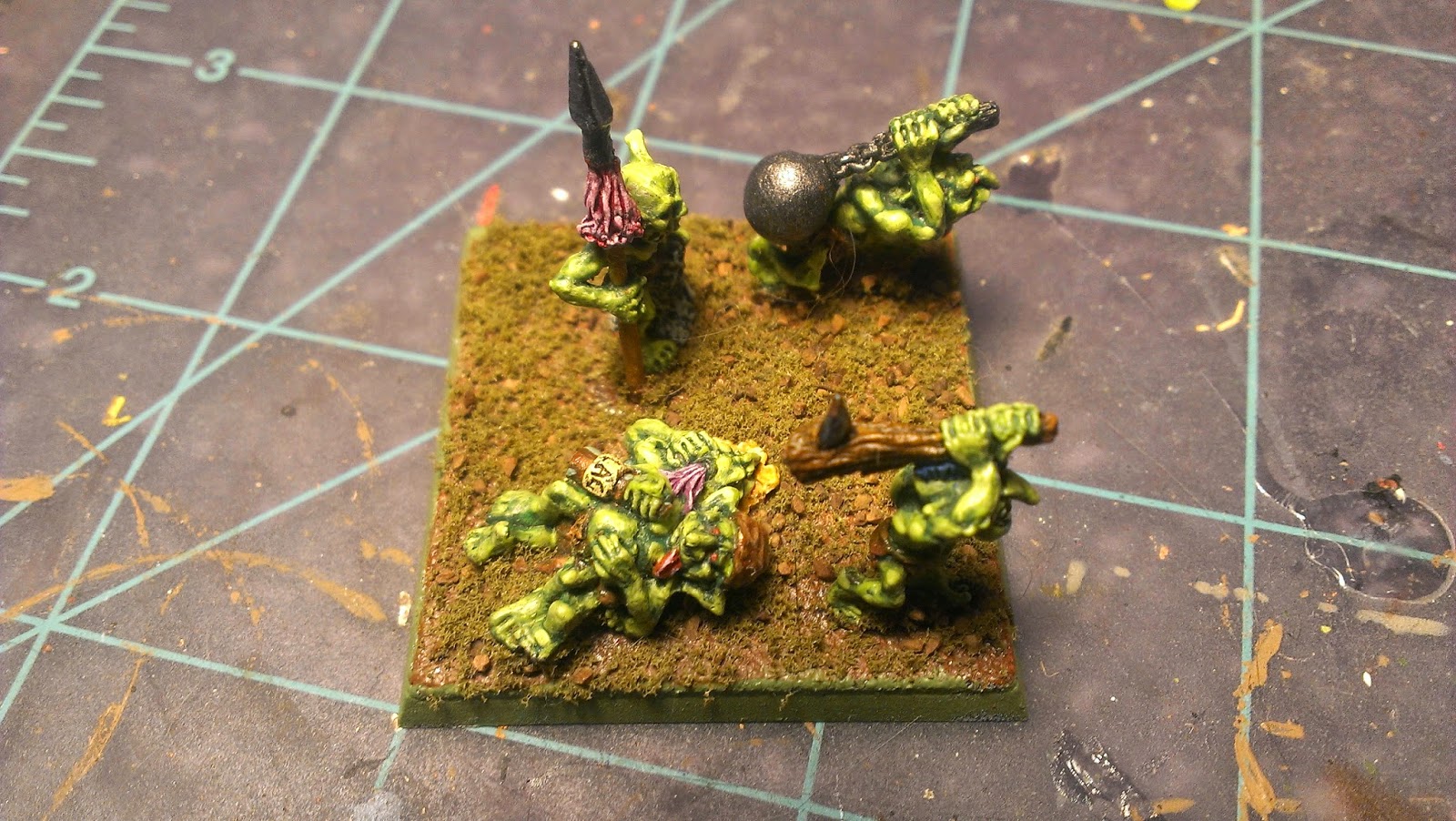 They are a fine, and weird assortment of models, most of which are of different shapes and sizes. Each one full of marvelous character, and it's clear also that each one is a vile and mischievous little shit!

The next two pics have a pair of snotlings brawling at the back of the base... 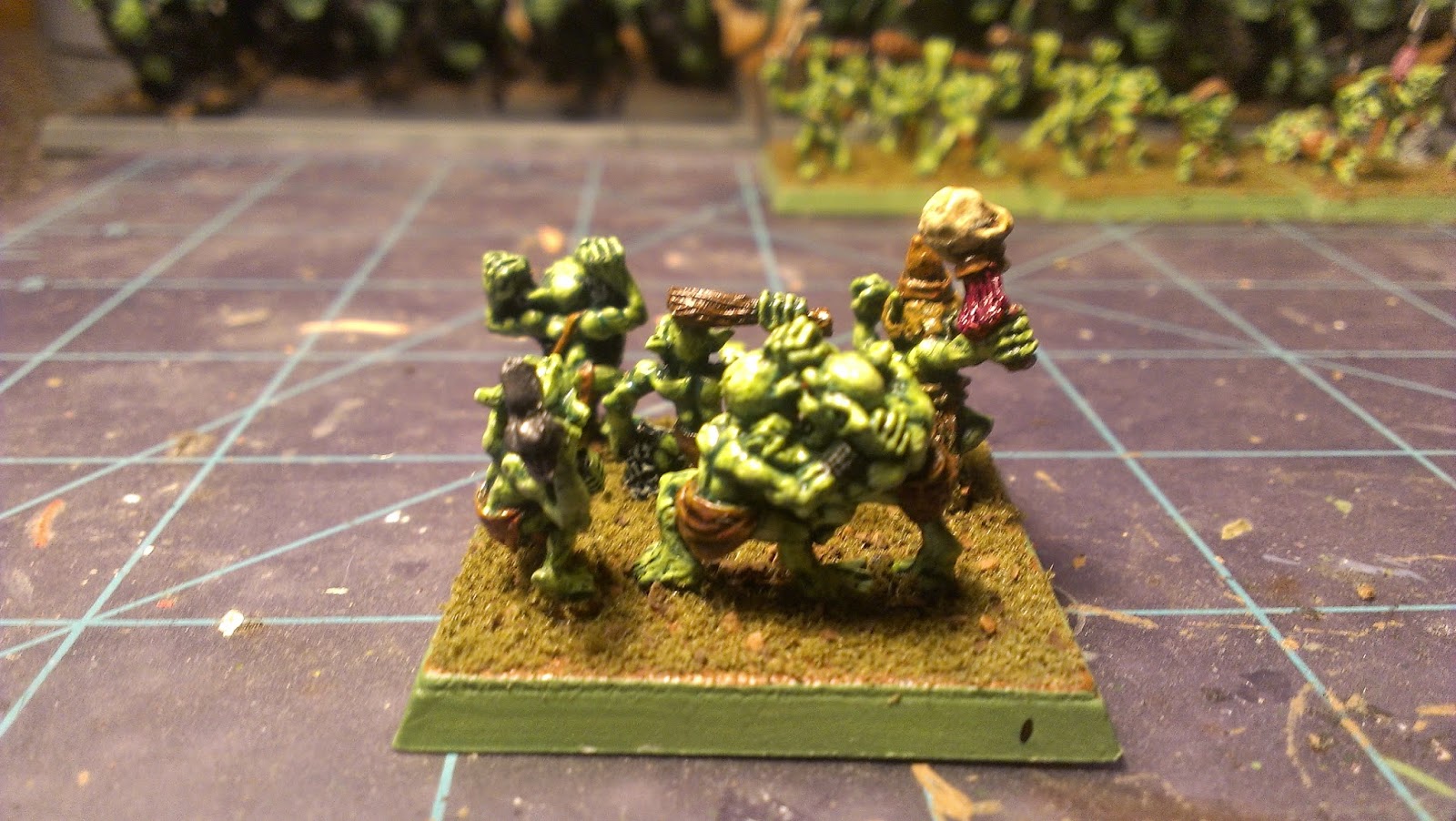 Notice that these were done prior to my discovery and immediate embracing of static grass. This is flock. And just like any old decaying diorama on display in your local hobby store or museum, the flock has aged to a strange color. And these models have seen been sealed in a case for over a decade!

This last base was clearly made for 40K, as the fallen Blood Angel shoulder pad contrasts nicely with all that green. I decided to leave it alone. 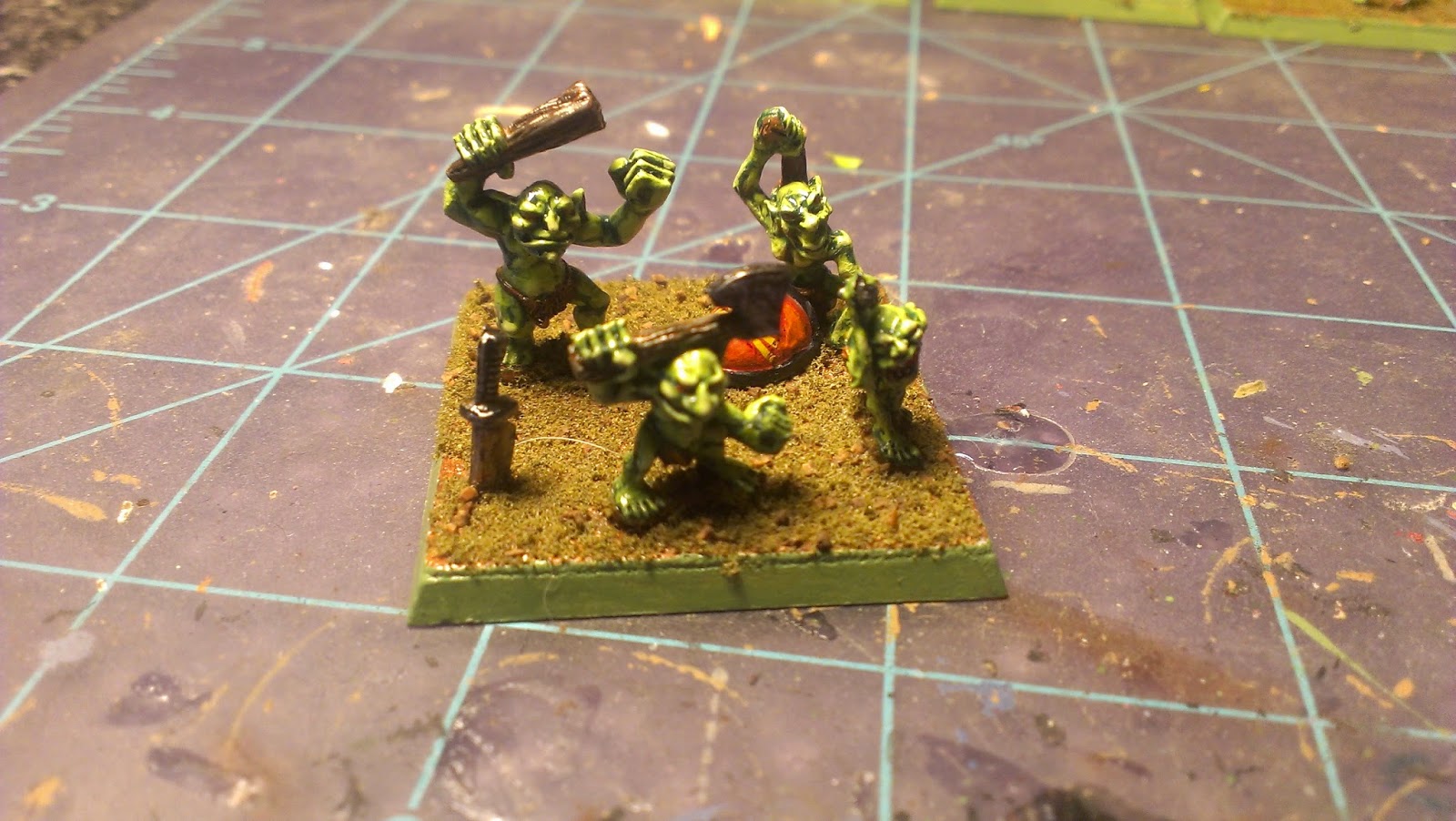 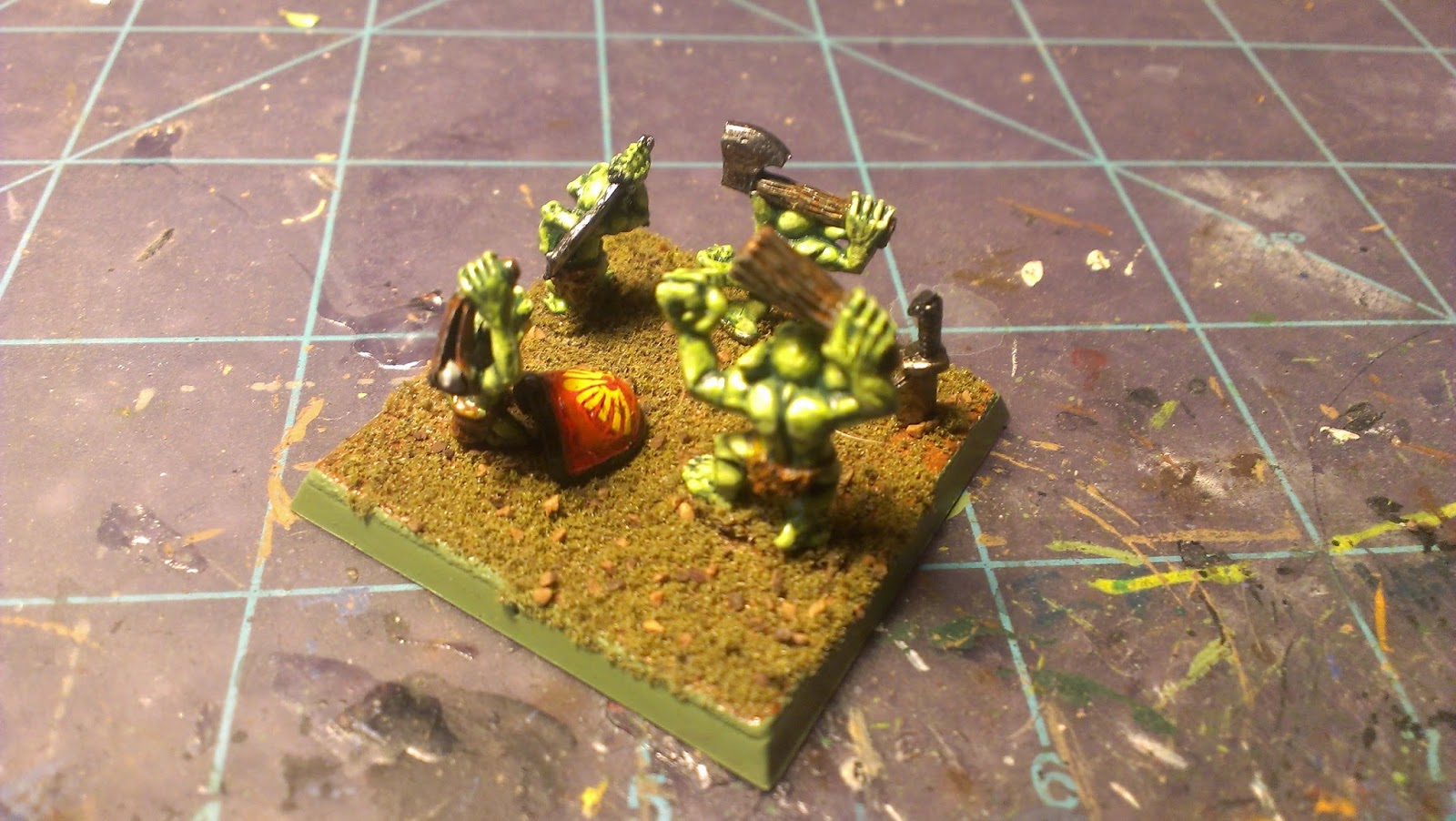 I discovered while going through some of my boxes of blister packs that I have about 2 more packs of snotlings, which ought to be more than enough to make four more bases, to give me a unit size of 10 bases. It will be interesting to see how my new ones will stand out next to these old ones. These bases may be slightly reworked by removing some of that old flock and adding static grass and repainting the base trim from Goblin Green to the Terracotta Beige that typically use.

Many of these wonderful miniatures were sculpted by Kev Adams, who during the final days of Bryan Ansel's reign at GW pretty much defined the look and character of the GW Ork and Orc & Goblin range at the time. He was brutally assaulted last year and Goblinaid was formed to help in Kev's recovery. Please check it out if you haven't before, and see how Goblinaid has helped him so far with his recovery.