With holidays, family stuff, work and artwork taking up the majority of my time this, I did find a few fleeting moments in December to slap some more paint onto the grots. Pressing forward with these guys, I went ahead and moved on to the next stage which was to apply Tesseract Glow over their Gretchin Green Foundation Paint basecoat.

Next came the layer of Applebarrel Kiwi,

This is followed by highlight of Sunburst Yellow, 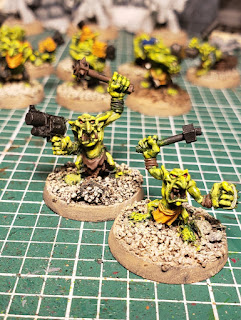 I followed that up by picking out the clothing items that are going to end up yellow. I used Firey Orange for that basecoat. Also I picked out their eyes using Khorne Red and base coated their teeth with a brown.

I was hoping to have these guys completely painted by the New Year, but that's not likely to happen. Still, I think they are coming along nicely even if it is a bit slowly...

There is a bitz seller that had exactly what I needed to make these guys work. A Runtherd arm with both attachments! After I acquired both I got to plotting exactly what to do with them. Clearly the old Slaver will  need to have that paint stripped off (is that...enamel? *shudder*), but the other guy is pretty much good to go.

I cleaned up the plastic guy, but I have no idea how his original owner applied the grit/texture (sure I could speculate,) to his base so I used a resin base extender to expand his base out to 32mm. I decided to give this guy the grot prod. He will be painted in Bad Moon colors to match those grots that I have been picking and poking at over the past few months.

As for the other guy, he too will probably end up in Bad Moon colors as well, which means I will probably need to paint even more grots, but trust me, I have plenty of them! But, as previously stated, that paint has got to go! Another candidate for the chemical jar is this old Head Honcho miniature (also Gorkamorka era) that came with all those metal grots. It maybe quite a while before that happens though, so for now I will be working on the plastic guy first.
*These pics are taken directly from the eBay auction page.

Posted by neverness at Tuesday, December 08, 2020 No comments:

Sin of Damnation by Gav Thorpe. Basically this is a narrative breakdown of the plot for the Space Hulk board game that was released about a decade ago. There have apparently been a few different editions of this story printed, my copy is the "Start Here With Black Library" ediiton which has the story Sin of Damnation twinned with a shorter story called Sanguis Irae which I will give it it's own review. Today we are focusing on just the story Sin Of Damnation.
We follow the boarding actions of two Terminator Squads of the Blood Angels chapter as they run missions against the Genestealer infestation aboard a massive space hulk. These missions are the exact ones from the Space Hulk game as are the characters. One squad is lead by Sgt Lorenzo and the other is lead by Sgt Gideon. They are reporting to, and being directed by, Capt. Raphael who remains onboard their vessel.
The story is broken down into time increments starting out at 00.04.36 all the way up to and ending with 00.57.77. This is an interesting nod to the game this is based off of as it is a rigidly timed game with some editions even including a small sand-filled hourglass. One would think that keeping up with the time would matter more to the overall story, but it does not. Much of the story is mostly colorful description of the debris and chaotic mess that is the space hulk itself and of bolters, flamers and assault cannons ripping apart and slaughtering genestealers. A plot sort of manifests about 3/4 of the way into the story.

++++SPOILERS++++
About 3/4 of way into this story, things start to get a bit more engaging for the reader. Fans and players of the last edition of Space Hulk will know that the every Terminator miniature in the game has a name. And these named characters start dying off in spectacular and heroic fashion. Usually with a vicious claw (or dozen) rending them apart. Auletto's death, is a bit exceptional as he is slain by his fellow Blood Angels after a genestealer implant attack infects him. They "reduce his remains to a charred heap within seconds" via a heavy flamer*. Omnio falls down a shaft only to be (apparently) dispatched by 'stealers. And there are other even more dramatic demises to befall these Terminators.
When they find The Wrath Of Baal, a long lost Blood Angels vessel fused into the Space Hulk they redirect their mission to retrieve an object (the chalice from the game) from it. I personally found this to be quite interesting and had hoped for more discoveries and Blood Angel history or backstory to be revealed but, not really, it was all about getting the cup.
The most interesting characters are Sgt Lorenzo, Sgt Gideon and the Librarian Calistarius**. I like Gideon mainly because he wasn't Lorenzo. I say this because Lorenzo has a personal hang up about a prior encounter like this on a Space Hulk where a lot of Blood Angels died, but he has survivor's guilt and wants to use this mission to redeem that guilt. This almost gets the guy killed but he comes through in time to defeat the main Broodlord in the end. The story's ending was exciting, and well written and paced, but beware reader, there is a lot of war-porn to grind through to get there!