Welcome to the Neverness Hobby Chronicle's landing page for all things Xeno Filth... Sorry, I mean, all things ELDAR, This will serve as a gallery and link-library for ease of reference to me and site visitors.

This page will be broke into three sections: Harlequin, Dark Eldar and Eldar. Note that Battle Reports featuring these armies can be found on the Battle Reports Page.


The Dark Eldar have always fascinated me. A twisted evil full of malevolence and yet lithe and beautiful. I have been itching to get a functioning army of these bastards up and running ever since the 3rd edition boxed set arrived on pre-order at my door way back in '98. I loaded up on this army 10 years ago when Serious Hobbies closed down (apparently they weren't so serious after all) and it's where I first met my pal Warfrog whose first words to me were a comment on the mountain of Dark Eldar boxes that I had in my arms ("They die in droves you know..."), However, I never did anything with this army for over a decade. But recently, thanks to Kill Team, I have finally done some work on these wonderful murder elves...
.
Warriors
These are my first paint scheme attempts that I  completed in early 2011 on one of the original plastics from the 3rd ed starter box. I liked it a lot (although I'll probably not go so over-board with the cast-light glow from the eyes on future models). This pic also shows you some of his peers that I slowly dabbled on in-between painting whatever my focus model of the moment was. The glider is for a scratch built Beastmaster and the Ambul behind it is the 'beast', a Clawed Fiend from the earliest days of Rogue Trader!


Archon of the Obsidian Rose

My Archon currently doesn't have a name. When the army is finally built and assembled enough to be deployed for a battle, maybe at that point I will conjure up a name.


Ur-ghuls.
Because every Archon needs these freaks in their retinue, right? 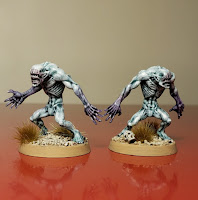 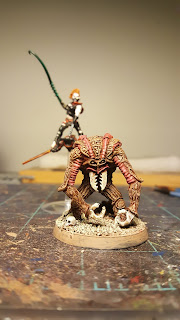 This is a scratch built/kit-bashed  Beastmaster. The Ambul is the 'beast', a Clawed Fiend from the earliest days of Rogue Trader! Compared to the recently released plastic version for Blackstone Fortress it is now surprisingly small... but it will still work for the role I have envisioned for it. 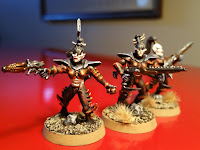 These warriors are a combination of the original 3rd edition ones released way back in 1998 and the newer bits released in 2010. I think they mix well together. you can see the construction and painting process at these links:
Kabalite Warriors Part 1, Part 2, Part 3, Part 4, Part 5

You can also find some quick links to their kill Team games on the Kill Teams Page. 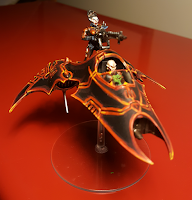 The first Venom that I have completed for my Dark Eldar. It is by far my favorite thing I have done so far for this army and I look forward to making more of them. This one has a crude, yet effective magnetic flight stand that made for it. 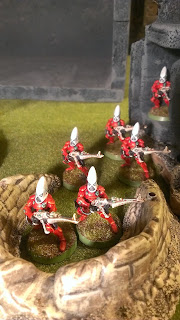 Guardians. For many, many years this was pretty much the only finished miniatures for my Eldar army. I have 12 more of these exact models that are half-way painted, and they have seen in this state since about...1998. I recall I was working on them while waiting for 40k 3rd ed to be released, and when I saw the Dark Eldar, I set them aside. Not that I ever did anything with them either! LOL. I really enjoy these models, but I have a few more additions to make before I can get back to them. When I do turn my attentions back to this army, this unit will hopefully get finished.

Ultimately, I think I might move away from the 'bone' colored weapons. The 'eavy metal team paints their Saim Hainn Eldar with black or grey guns and I think they stand out better. BTW, these were the repackaged original mono-posed plastic guardians that came with metal shurikan catapults. They were only available for a short period of time relative to how long the kit without the shurikan catapults was in production. 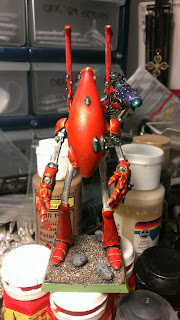 This Wraithlord (aka Eldar Dreadnought) was painted for a friend, so it's not mine, however we are both using the same craftworld (Saimhainn) so I am including it here as both a gallery piece and as a reference for myself.

Clowning Around Part 1, Part-2, Part 3, Part 4 , Part-5
This is my running (although untimely) feature where I show off any work that I do on my Harlequin miniatures. 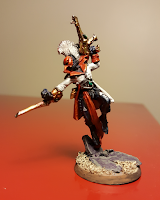 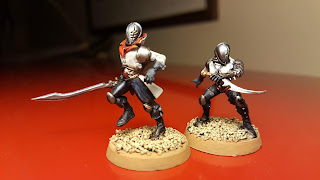 Mimes were the "new hires" for the Harlequins in the Shadow War Armageddon game.

Soul-Bound Dire Avenger
This is the first model that I attempted the Ynnari color scheme as shown in White Dwarf. 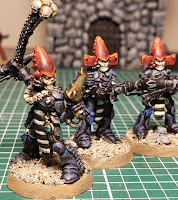 These are the first unit completed for the Ynnari. I only used the Ynnari scheme on the helmets however. These guys could just as easily be up with the Craftworld Eldar, and they will be ultimately used interchangeably between the two factions (indeed, as well as most of the factions on this page) but particularly so in a visually thematic sense. 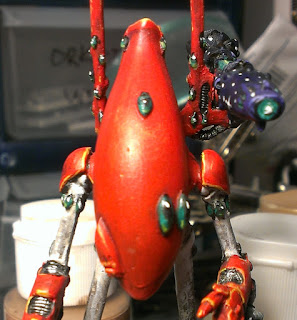