Hello again,  In my last two posts I showed you the tank I was stripping the paint off of. You can see those details here in I'm a stripper part one and part-2. This post-thread continues to show the fate of the primary model of those posts, a late '90s era Warhammer 40,000 2nd edition Space Marine Vindicator.

After over a week of bathing in Superclean, the tank was all but separated, mostly due to being joined primarily with super glue. The yellow/orange color that was underneath the black paint job has been really resistant to the superclean, but most of it has come off. What is left can be easily painted over and no one will be the wiser (unless they follow this blog I guess).

After cleaning off the super clean chemical, I got down to scrapping off the more stubborn paint and glue chunks. Particularly the glue chunks which you can see dotting the paper towel that these parts are resting on in the pic below.

Here is a close up shot that I took right after I put the first track assembly back on. As I noted at the end of the last post, this reminds me of a photo you might see in an old talk/army surplus or other such industrial machinery graveyard. Just add weeds and graffiti! 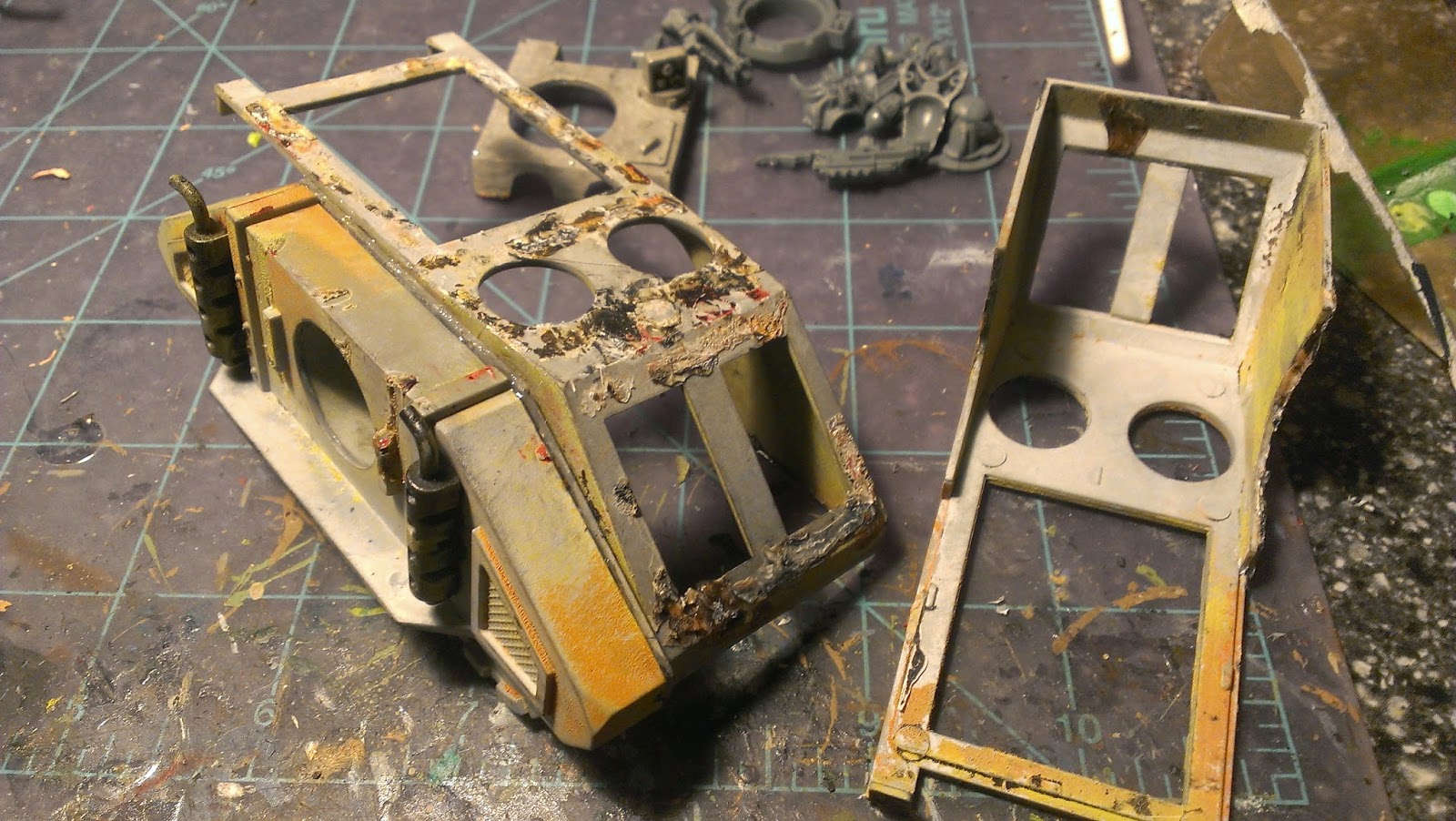 I took this next pic to illustrate the correct way to assemble the original Rhino chassis. When the sides of the hull are put on you want to make sure the center joins touch and that both ends are left with a sort of 'bumper' that sticks out, otherwise you'll end up with gaps in the top and bottom of the model.
With both track assembles added back on, we have a tank looking more like a Rhino again! 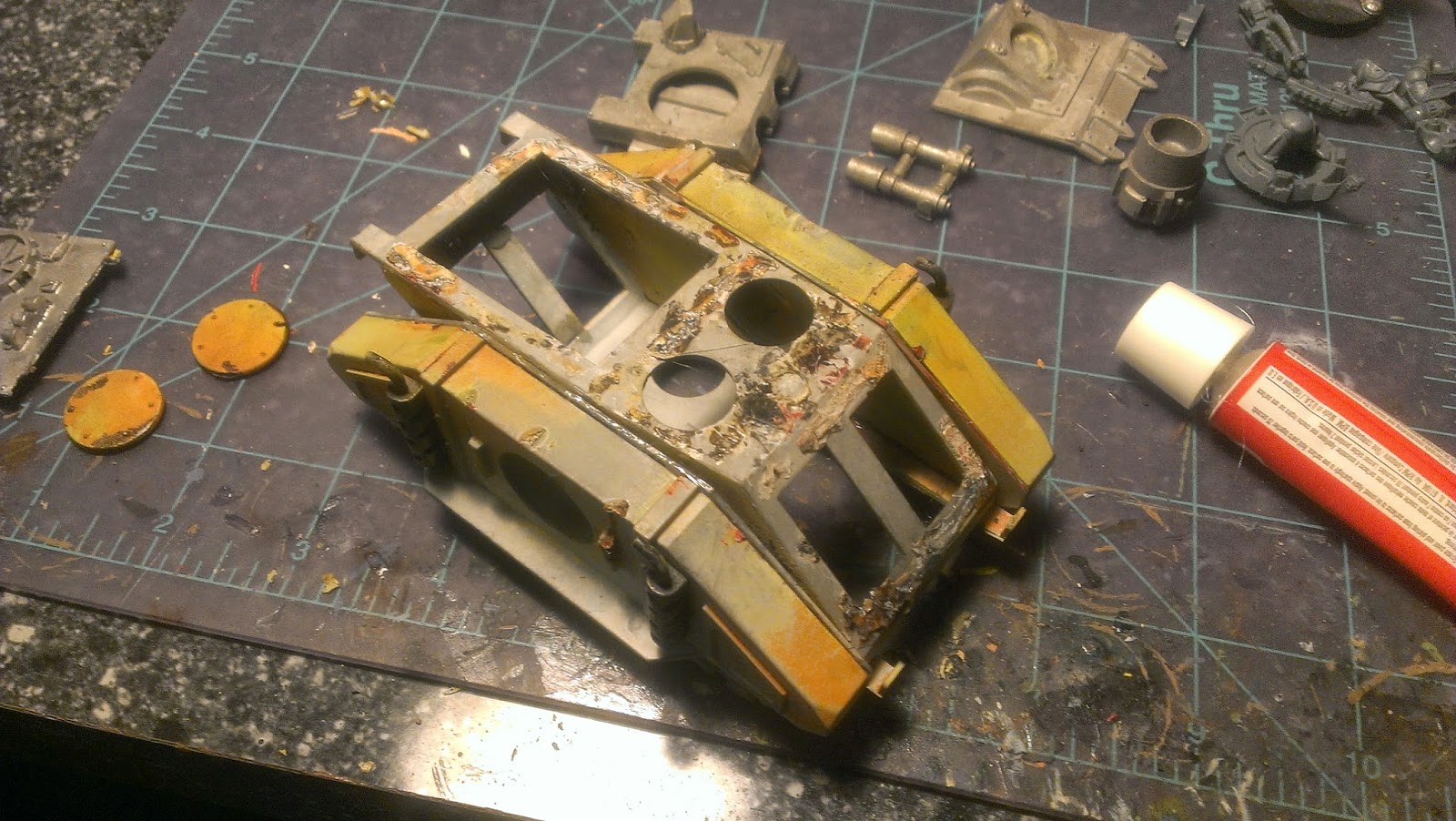 Now to add the metal bitz: 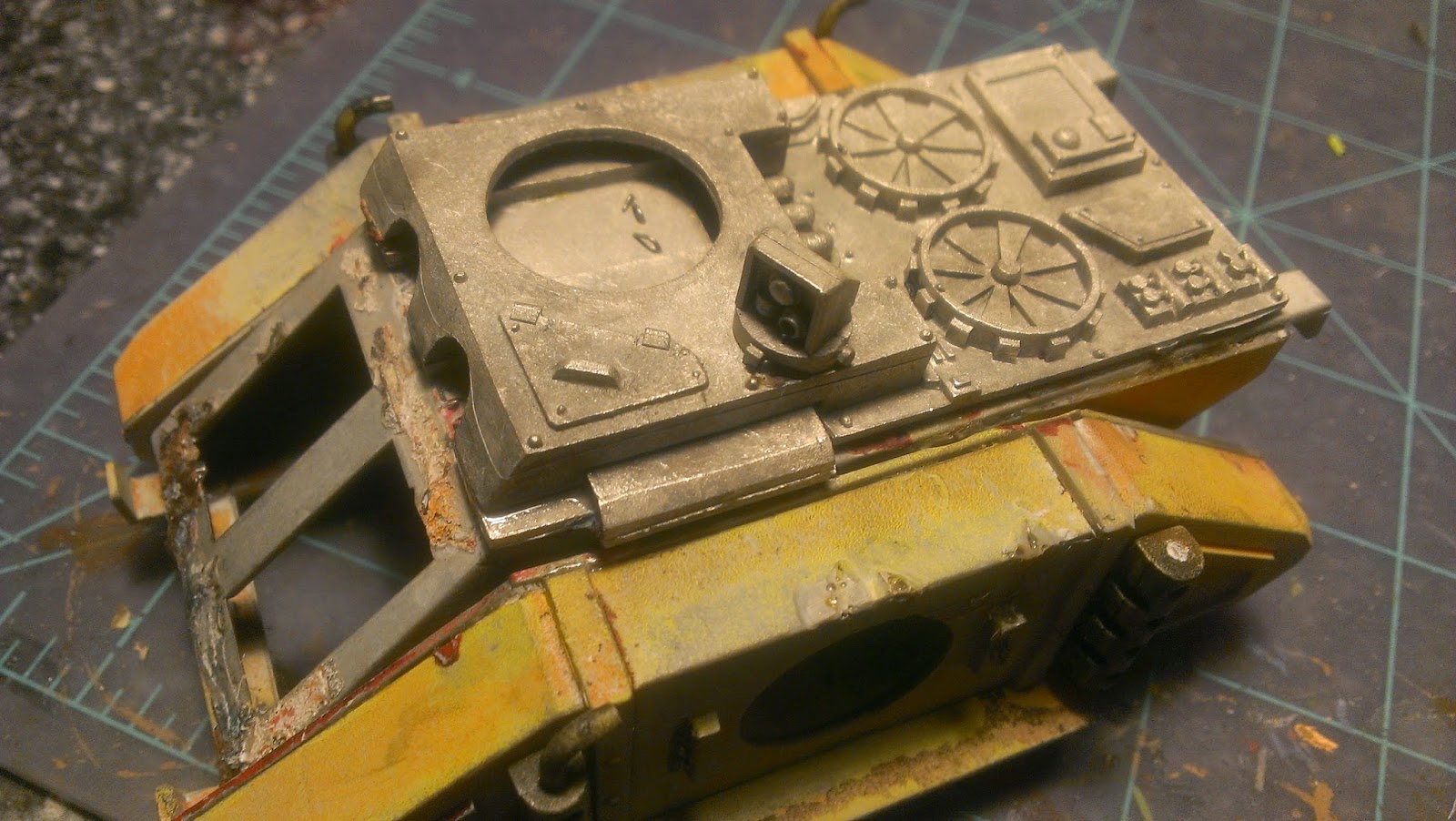 This was kind of fun to put together, but man does it make this model heavy!

This model was missing some parts when I got it, the back door and bottom hatch mostly. Luckily after 25 years of collecting these models, one tends to collect a few bitz for just such a situation:

Now, and here's where I hope for some input: how do you like the gunner:

Oh, and yes, if the title wasn't a give away, this is going to be completely turned into a Vindicator for my World Eaters Chaos Space Marines! Blood for the blood god khorne! Because the idea of a support vehicle for a bunch of chain axe wielding loons seems amusing to me.

The tank from part one has soaked in Superclean for a few days now, and here are the results after running them under warm water and scrubbing them with an old toothbrush.


All-in-all, I am quite pleased with these results. The metal in particular was stripped down to looking almost like new again! The Superclean did what Warfrog told me it would do to superglue: it completely eliminated it! Thus this model is mostly in pieces now. The under layer of orange-yellowish paint was revealed when the black was removed, however the superclean had a tougher time dissolving it on the plastics.


These plastic bits, and any bits that still has some paint on it, were put back into the Superclean. Also, I placed into the jar the following models that my pal Brian Hunter gave to me. I think these guys will end up joining my Celestial Lions squad at some point, but who knows for sure?  Once I have them cleaned up, I'll have them ready for whatever fate awaits them! 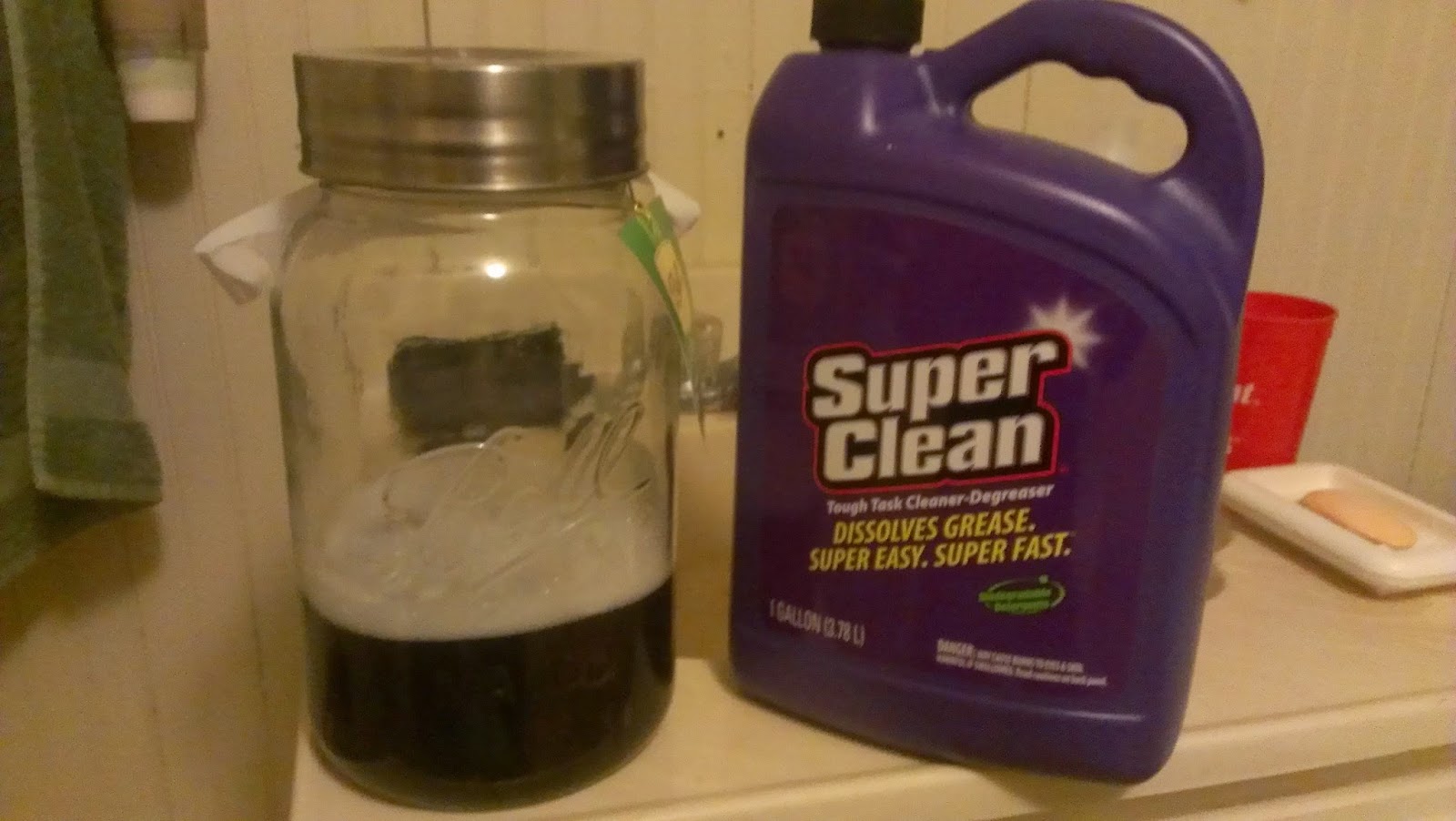 A paint stripper that is!

Tonight I have begun the process of soaking a model tank in Super Clean. I'm only using a big-ass mason jar that I picked up at Walmart for like  $13.00. I put the model in first and poured the Superclean on top of it. Warfrog's Turtorial will teach you more about this stuff (and then some). 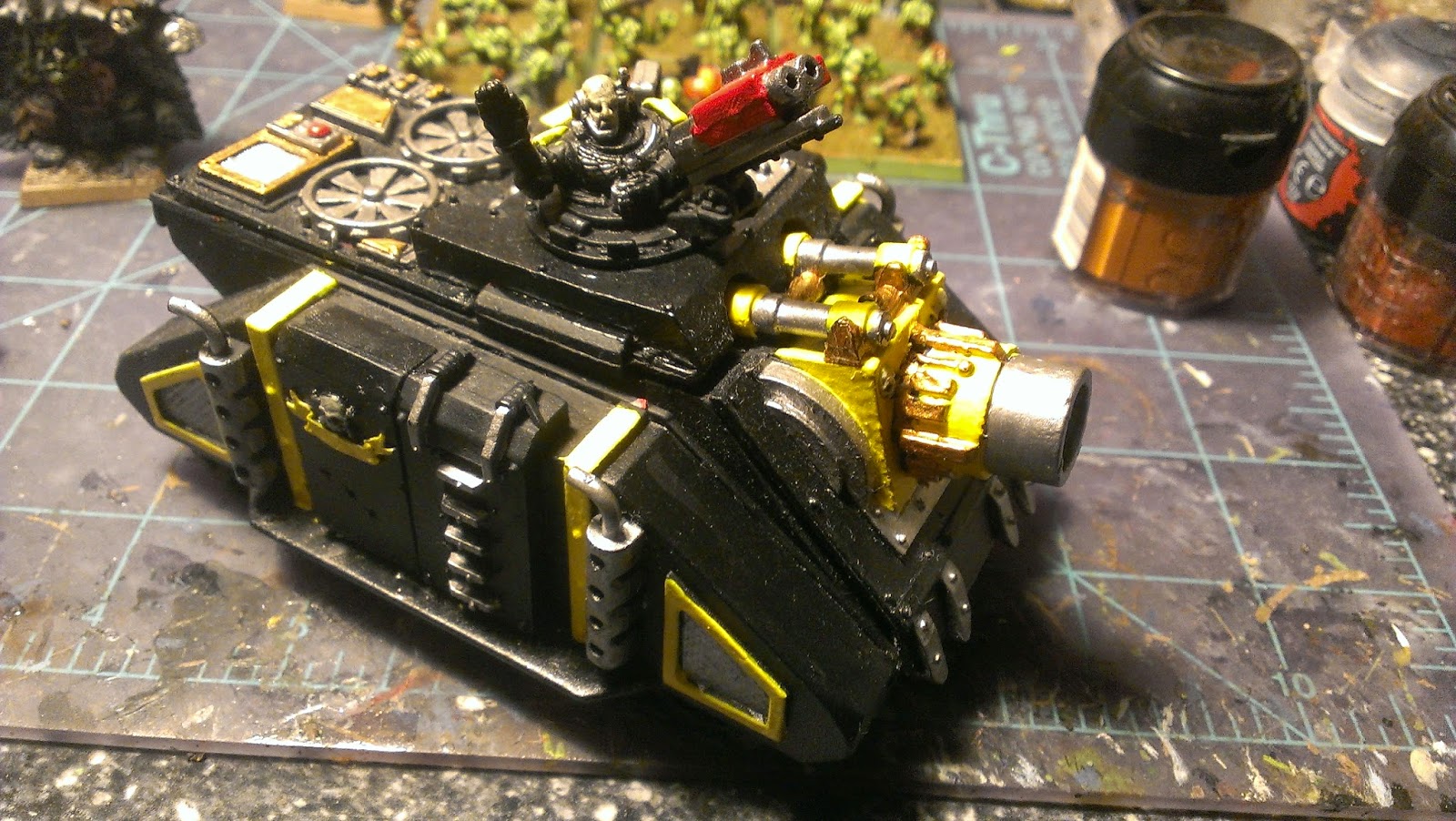 A while back, July I think, I met the legendary Necron Bob who was in town to give his old army to Da Masta Cheef. You can find out more about this event, that Da Masta Cheef titled The Demise of the Black Consuls, here and see pics of the other models as well. I ended up with one of his models, a Black Consul 2nd Edition era Vindicator.  I am probably going to turn this into a World Eater Vindicator. This model's paint scheme is thickly applied and I didn't want to paint over it for fear of losing details, so it just has to be stripped.

It is now sitting in the jar in the first pic, in fact, it's in that pic, going through the early stages of the stripping process. I will check on it again tomorrow night and see how it's going.