The Imperial Infantryman's Handbook -has been received

The Imperial-Infantrymans-Handbook is the combination of the Imperial Munitorum Manual and Imperial Infantryman's Uplifting Primer. I did a raving "drink the kool-aid" endorsement when Amazon first listed it.

Nothing is really new here (with exception to the brusque warning -attached below- that if I were YOU citizen, I would heed!) however this still remains a great reference for the RPGs (Dark Heresy and Only War particularly) and is generally just great Imperial propaganda that adds a great feel and sense of duty to the budding Imperial Guard commander. When I ever get around to fielding my IG army, I think I will take this with me to the game and randomly read litanies and propaganda during my opponent's turn. I mean, why not? Spirit of the game and all that...:D

If you missed my endorsement, or the link above elluded you, here is what the intro page says of the book:

"You there soldier! Don't know a las-cutter from a lascannon? Not sure which prayer to the God-Emperor will protect you from the enemy artillery fire? Need to know how to survive an explosive decompression on your drop ship or set up a crossfire ambush in a death world jungle? Better consult the handbook. The Munitorum adepts give us those things for a reason, you know..." 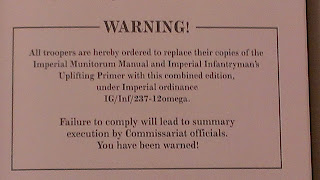 And it only gets more awesome from there! If you don't have it, you should. If you need a fun stocking stuffer for a fellow player, this is a great thing to give.

As I played through the last few games, I grew more and more dissatisfied that the vehicles that I tend to use the most were only half painted (and barely even to that level). Worse, they were this weird fusion between the old style (see the Space Wolf Gallery: Vindicator) and the current (in the same gallery, see the Land Speeder Typhoon). The current being of a darker tone over all with more Shadow Gray, as opposed to the older style which had Space Wolf Gray as the dominate tone. Oddly, these 3 old (this frame remained in production longer then ANY 40K models! I challenge you to find another!) Rogue Trader era models were in my collection in a weird transitional state where one was highlighted up to Space Wolves Gray, one in the middle tone, and one half-assed base-coated.


In recent games I have been only using the two with the most color, and I decided that I just needed to finish them. In October I took a small vacation and during that time while working on the Bastion (another blog entry coming soon) I decided to throw some paint on these things with the delusion that this would be fast (ha!). 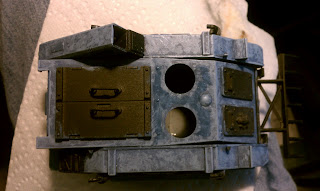 The 1st thing to do a was tone down the over-bearing highlights, so I went in and did that with a watered down Shadow Gray using pure paint for the darkest areas. 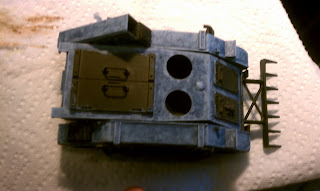 This particular one I really deepened it quite a bit..... 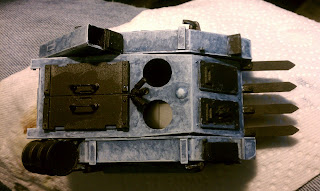 One I was satisfied with this recovery of the deeper tone, I proceeded to tighten up the the middle color (a sort of ...Masta Cheef don't start...Baby Blue-ish color) and the Space Wolf Gray highlight. As well as the free-hand forms of the Grey Hunter pack icons. 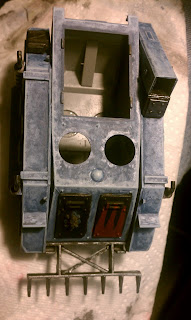 You might spot in my battle-reports that I don't glue down the rear hatch or the smaller pair of hatches that the bolters rest on. This is so I can remove them during game play, as well as swivel them when the tanks become imoblized. I am contemplating magnetizing them... 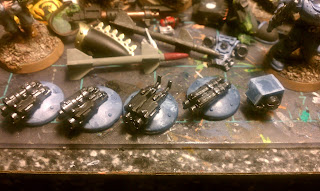 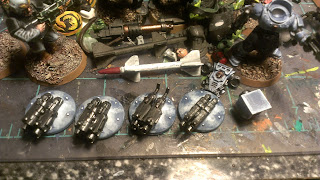 It's a bit subtle, but here is the transitional state of the storm bolter hatches. And the hunter-killer (guaranteed to miss!) missiles as well...
Well, over this past weekend I picked these rhinos back up and damn near finished them! 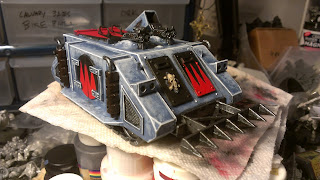 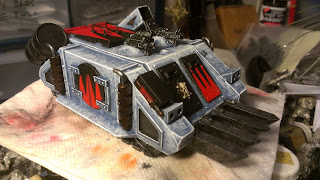 They are not done yet, but i  am very pleased with their progress up to the this point! 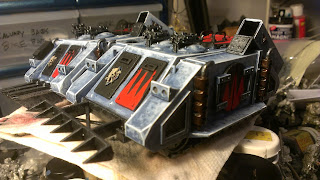 All I have left to do is to paint the lights, finish the metallic areas, and apply decals. 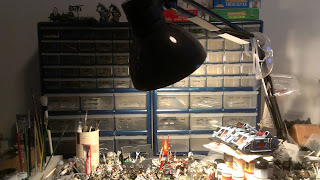 Also, during the aforementioned vacation, I decided to spend some time (and money) organizing my bitz bins to a more user friendly state. I think it has done wonders for my whole modeling area and saves me time from having to look for weird and wonky bitz.

Posted by neverness at Tuesday, November 27, 2012 No comments: 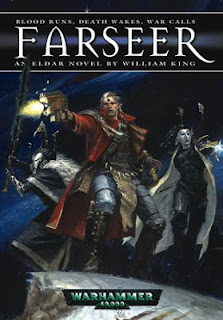 Farseer by William King.  Despite my efforts to write these reviews without spoilers, naturally some are bound to occur even when describing characters, so, be warned, SPOILERS AHEAD! While recently reorganizing my paperback book shelf, I stumbled upon this book that I truthfully do not recall buying. Being self-contained, and by Bill King, I decided it looked like an interesting diversion while waiting for Pariah to be released and taking a break from reading the original Ian Fleming 007 novels.

Part of the attraction toward this book was that it was by William King, whose work on the Space Wolf novels, and Gotrek & Felix novels, as well as some very important and long lasting Warhammer and Warhammer 40,000 background elements were undeniably crucial evolutionary steps in both world's post-'80s development. They still are! So a short self-contained novel by him seemed like a perfect morsel to munch on over these past autumn nights, right?

The story starts off in a very... how should I say it? "D&D module-esque" way. For those of you that have never played a classic D&D module, they tend to start off with all the characters gathering in a bar or tavern, somehow coming together awkwardly before being led by the nose on an adventure which usually climaxes at a specific destination point (castle, tower, dungeon, etc, usually this place is in a forbidden locale or is specifically forbidden) while typically being lured there by the promise of riches. We've seen this in movies and TV as well:  a half-drunk anti-hero is discovered, usually having fallen from a previous grace and fortune and now is wallowing in drunken obscurity to be plucked up by someone who desperately needs this anti-hero to "get over it" and be a real hero! Shit, I may have just gave away the 1st half of this book...

...because Janus Darke is that drunken anti-hero wallowing in drunken failure. A pathetic man who was once a powerful Rogue Trader, Janus is now an in-debt drunk wasting what little fortune he can find on bad gambling choices. The "someone" are the pair of Eldar characters you see flanking him on the cover: Auric, a Farseer and Athenys a..., well, I'm not sure, but she proves to be quite a bad-ass! I assume she might be an Autarch or some-such warrior who is no longer adhering to her warrior path. Never-the-less, I found her to be the most interesting if not the most under-developed character in this tale. So they find Janus Darke, and ask him to take them to the "forbidden destination", the planet of Belial IV, in the Eye of Terror. This plot structure is quickly established, and as a reader I thought the journey would be the bulk of the adventure as the characters navigate their way around the Eye of Terror etc.

Nope! Instead we have to deal with the fact that these eldar have chosen Janus Darke, and King is not going to let Janus off of his failure perch that quickly. Janus has to somehow retrieve his ship, survive his girlfriend Justina's attentions (hehe), and survive the gangsters who want him to pay off his gambling debts. All of this turns into some interesting hive world adventures, although I felt while reading this King could have developed the hive world on Medusa better, as it felt more like the descriptions you'd read of a fantasy port city than of an over-populated hive world. Regadless, all of this makes for a fun read, as you learn that Janus Darke is being hunted down by a Daemon Prince of Slaanesh, Shaha Gaathon, who wants to possess Janus.

Although this all made for fun reading, my favorite elements of the books had to do with Simon Belisarius, Janus' partner and Navigator. I enjoyed reading how the Navigator house he belongs to has a centuries-old outstanding debt with Craftworld Ulthwe which the eldar have come to collect from him. I was also thrilled to read Kind's description of the journey through the warp and what it was like to make such a journey into the Eye of Terror. Players of the Rogue Trader RPG should read this passage alone as required reading before sitting down to play.

Another fascinating detail here was the history of Belial IV itself. King describes this shattered eldar crone-world through the eyes of Janus whose visions reveal to him (and us) the corruption, fall and destruction of the eldar race and this world and the birth of Slaanesh.  This is fascinating reading, and even if you find the rest of this book difficult to grind through, these parts are well worth it.

And without revealing too much more or touching on how this all ends, I have to mention Zarghan. Zarghan is a fallen Space Marine from the Emperor's Children Legion. The funny thing is that he's bored with constant orgies and other such silliness that his minions are involved with, but is totally getting his rocks off on wanton slaughter and inflicting pain in combat while blaring loud music into his ears. (..'Noise Marines: Live at the Palace of Pleasure'?)  He actually wonders if he would make a better khornate follower at some point, which makes for a far more interesting character than if he was a more stereo-typical Chaos Marine.

Despite how predictable I thought the book was starting out, I didn't foresee the outcome, but when some of the reveals occurred I found myself physically face-palming... ("Auric...rhymes with Elric...got it..."). However, over-all, this was a good book. Again, the most rewarding elements were the details on Belial IV, the history of the Eldar Fall and the birth of Slaanesh, and the final chapters of the book which are pretty much a dramaticly written massive blood-orgy of combat.

Did I like it? I did. But things really started to get interesting as the book was winding down. Clearly, and this isn't evident or obvious until the last few pages, but King was setting this up for a sequel, which never happened and I wonder if it ever will...