My squad of Black Legion Chaos Space Marines is in need of a leader. I foresaw this pending need for a few Aspiring Champions last summer and purchased 2 of the clampack models that GW currently sells from a reseller on ebay (hey, the modeling/hobby budget was virtually zilich back then!). But only now did I finally realize a true role for these guys. Well, this guy anyway...

I was stymied somewhat in recent times by these clam-pack models costing so much, and with their multiple part assembly I can understand why, to a degree. I appreciate the sheer amount of detail these multiple part kits contain, but in the end I would much rather have more weapon options on the sprue than say, a three piece shoulder pad! These models also are very limited in pose options, and that's a bit of a turn-off for me. However, once painted up properly they look great with the rest of their army. That is assuming you don't have multiples of the same model. Otherwise multiple Deathjestors squatting identically on a rock looks strange...

Back to just this model though, and my challenges with figuring out just how he is going to go together and how I will approach painting him. There is so much detail on this model that I am having to paint him, at least the base to mid-coats anyway, prior to full assembly. Nothing new for me, but I find that these models tend to hold together better if I can glue unpainted surface to unpainted surface. 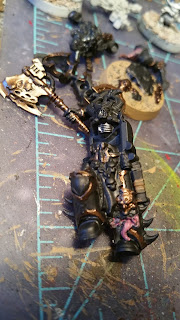 So far I am following the paint scheme used on the Black Legion unit, however this guy just has all kinds of weird details (tongues?) that are going to take me longer to paint than I had originally estimated. He has subtle mutations throughout the model that I have been stumbling on and some that I just didn't know what I was supposed to be looking at and I had to refer to the pics in the Chaos Codex to figure them out (i.e. leg tongues?).

Anyway, this is where I am at with it. I am working on him at the same time as the Black Legion Bikers, we'll see which I get finished first...

I have made vast progress on my chaos bikers since the last time. In particular I am focusing on the Black Legion bikers of this group. I made the hard decision to make 4 of these guys into Nurgle Bikers, which they originally were when I bought them. At least that's the plan for now. They are the ones that require the most work and clean-up to rebuild them into something less...crappy. The models you'll see in this post are the "generic" Black Legionaries whom, for the most part, are in decent enough shape for me to move on to painting.

Having said that, these Black Legion guys are still turning out to be quite a bit more work than I had anticipated...
This first guy is somewhat Khorne themed compared to the others. I will probably add some sort of iconography to show his alliance to the Hounds of Abbadon on him somewhere. He has a Khornate axe held in his right hand, the arm of which comes from a fantasy juggernaut-of-khorne kit. The plate on the front of the bike also comes from a plastic juggernaut. After how well I think the Khorne Aspiring Champion biker came out, it was tempting to just scrap the whole idea and just do them all up as berserkers on bikes, but reason held that impulse in check...

Here is the same model with a standard Black Legion biker. 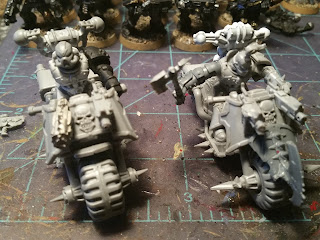 I proceeded with base coating the brassy areas with Tin Bitz. 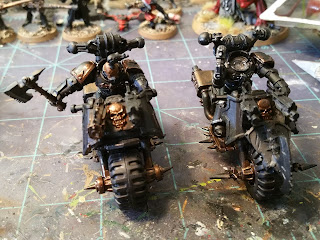 I was going to do these models in pairs but I was having fun with the unit so I decided to add two more models. 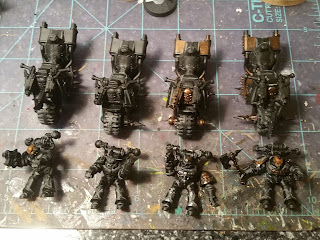 Here they are with mid-coats... 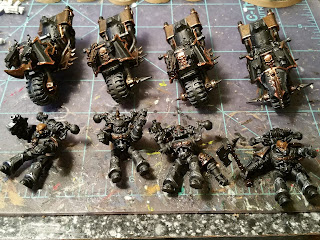 With the right amount of time and focus, the Black Legion scheme paints up fairly quick! I should get these guys finished soon. Hopefully.

I have also begun work on the chaos biker model that will become an Aspiring Champion of Nurgle, but I'll save those pics for a later post, as indeed, Project Nurgle will begin a whole new phase for my Chaos forces and I'm getting excited about starting it. More soon!
Posted by neverness at Sunday, April 10, 2016 No comments:

The Black Legion -unit one completed

At the onset of a week long vacation I focused on getting these guys finished...

The first two models that I did as test models back in December of 2015. I found as I was working the whole squad up totheir level, that their level itself needed to be raised so I added some more details, and performed some touch-ups.

The rest of the models I started later and I have been jamming away on them since the last time I posted about them.


These models were fairly easy to work with and now that they are done I am pleased with the results. Next up I want to build and  paint an Aspiring Champion to lead them. I have also been flirting with the notion of getting them a rhino to zip around in.

The images that follow are basically these models standing in the moss of our backyard. 'Action shots' I suppose. Enjoy!


As a personal note, a few days after I took these pics the forest behind my house caught on fire and dealing with that has consumed about 3 days of my vacation.

Now on my last day, as I type this, I am killing time waiting for Da Masta Cheef's wedding ceremony to Wolfie to begin. So go and wish them congrats if you can spare a moment!
Posted by neverness at Friday, April 01, 2016 No comments: