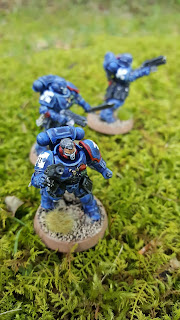 Welcome to the Codex: Space Marines landing page! This page is intended to be a home for my gallery of Ultramarines, and a link library for Ultramarine projects featured in the Neverness Hobby Chronicles. This will also feature the other Astartes models that fall under the Codex: Ultramarines umbrella (i.e. Legion of the Damned).

For now I am lumping the Dark Angels here also (GASP! Heresy!!!) until I have enough cause to break them out into their own page.


The Ultramarines were my brother's primary army back in the day when we played 1st and 2nd edition. It was quite a vicious army in 2nd edition, with his Chief Librarian in Terminator Armor being a vicious foe to contend with. Most of these models are VERY old! Read more about it in this next link: 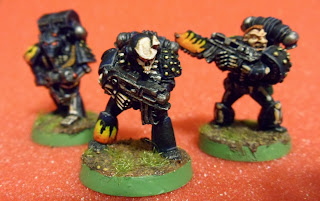 This is no longer an army (sadly) but this single unit of Legion of the Damned has been making appearances with my Ultramarines. It occurs to me that whenever I get the Celestial Lions into something resembling a functional force that I will be able to use the LotD with them as well. So I decided to set them apart in this list.
Legion of the Damned. A look at the squad I painted up in 1999.


This was my Codex: Space Marine army of choice, that is, before I acquired my brother's classic Ultramarines. The Celestial Lions are based upon the awesome background that GW developed for the 3rd war of Armageddon campaign.  This is going to be the army that will have the updated equipment (current style rhino-chassis, etc.), however I am thinking that said equipment will not be in the best of condition, again based upon the Armageddon background. That was the premise I I had in mind when I started these guys. I whipped up this guy for a local painting competition (I lost to a vastly Superior painting of Typhus)  This was intended to be a small army that I didn't intend to make too big, but allow me to use models and tactics that aren't available to my Space Wolves. Again, with the Ultramarines now in my possession that role became redundant. But I liked them a lot and decided to develop them for Kill Team. 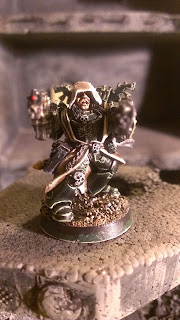 I have been contributing to the painting of a friend's Dark Angel army sporadically for nearly two decades now and I have always liked painting them and the way that they turn out when I do. They have held the test of time as well. I do have the 8th edition starter set and the intent to eventually field a small, mostly Ravenewing, army but I think they will mostly serve as allies for Imperial Guard. I want to do Ravenwing because the playing style will be so vastly different from my other space marine armies. However, this will remain a Tertiary army for the time being as I currently lack the resources and time to focus on them.

Cypher
Cypher here is the model that represents the painting style that I do the Dark Angels in. I originally got him to harass and annoy my friend's Dark Angels armies as he lead The Fallen through the war-torn wastes of the 41st millennium spreading his different kind of truth... ;) With his new data-slate, I hope to use him in some of my other armies!
Dark Angel combat squad 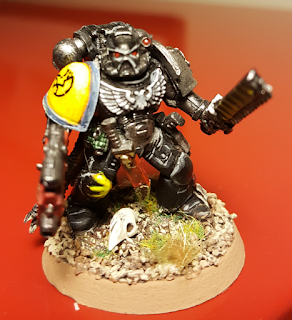 ++++ATTENTION: THIS PAGE IS STILL UNDER CONSTRUCTION+++++