Back in late May of 2019 I found a game store close to my job that sold used miniatures, and I was able to score a complete Ork Boyz boxed set (sans box) for a very generous price. I had been wanting to whip up a Bad Moons unit of Boyz to supplement my budding Bad Moons regiment. Like, a week later I lost my job, and that entire project went to the back burner; but not before I was to construct a single model for the unit: the Nob.

While working on my Dreadtober project I found myself with too much of my orky flesh wash mixture, so I snatched this guy out of the queue and got him painted up to that stage. 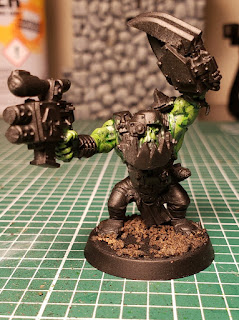 I didn't touch the model again until fairly recently. I next base coated the yellow areas using Fiery Orange.

Then it was back to the skin which I used a color called Kiwi. Sunburst Yellow, a discontinued yet still amazing, Citadel Color paint from the '90s, was painted on the armor. I had to apply two coats however to really work out the splotches.

He's getting there, and hopefully with my (albeit challenged) persistence I will be able to finish him and the squad he belongs to.