++++ATTENTION: THIS PAGE IS STILL UNDER CONSTRUCTION++++

Welcome to the Neverness Hobby Chronicle landing page for all things Chaos. Well, maybe not all things, but rather just a gallery and link library for Chaos miniatures and models featured on this site. Battle Reports featuring Chaos armies can be found at the Battle Reports page.


This will be broken into two sections: Chaos Astartes (i.e. Chaos Space Marines)  and Chaos Daemons.

﻿
This is the original Bloodthirster. When I painted him he still belonged to my brother, but I acquired him when I bought his armies from him. Note the Dark Angel shoulder pad on his base, proving that the original intent was to use this model for WH40k. I believe I painted this model as a color study for trying to figure out what color I wanted to paint his Khorne Daemons and the 'new' Blood Thirster if we ever got one (which, we never did...sigh...). But I was, and still am, satisfied with the color study. It reminds me of the painted Bloodthirster in the original Realms of Chaos: Slaves to Darkness book that was fighting a Space Marine Dreadnought. Ah, classic stuff... Personally, I like the character of this model but compared to the current plastic kit, he is just small. I concede that he'll probably see use as a Daemon Prince in future games. Oh, and the one time I ever went to Games Day I entered him into the Golden Demon awards. He didn't have a hope! LOL 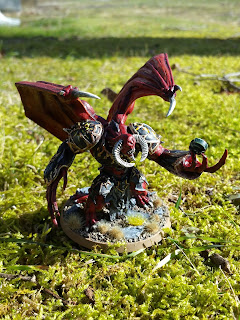 Keeper of Secrets 1 -AKA, She Who Milks, Rogue Trader era model. 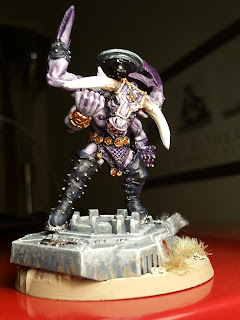 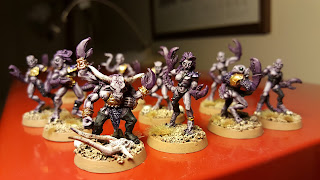 ﻿
This model's color scheme (and the glare in this pic is giving a false yellow highlight that really isn't there) is sorta of based off of some models I think I saw in a Codex or White Dwarf, in particular the green belt as it totally contrasts against the red and I think it looks good.  I really had fun with the tones. It was a simple model to paint really and as a result this paint job became the basis of my Worldeater force and he is now part of a whole squad of berserkers.

My brother was building a World Eaters army toward the end of 2nd edition, and this is the only space marine model that I painted for it. We were very unsure what to do with a good chunk of his models for this army, as when the World Eater models became Khorne Berserkers (a unit type vs. a Chapter) we struggled to figure out what to do with all the models he had that were armed with bolters. Now that I own them, I will simply use those guys as 'chaos space marines' with Marks of Khorne and leave these chain sword wielding psychos as the Khorne Berserker unit type.


kharn the Betrayer
You can't have an army dedicated to the Blood God without having Kharn show up, right? This miniature was finished almost two years prior to the release of the current plastic one. I think I like this one better. The plastic one looks like he's trying to fly a kite...

Juggerlord of khorne
I am glad I got to use this guy in a few games prior to him becoming a Legends poster boy. I hope they do a plastic version some day... 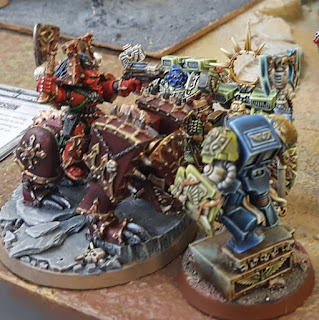 You might know him from films such as Blood On The Road, Biker Skulls For The Blood God and Are You There Blood God, It's Me... 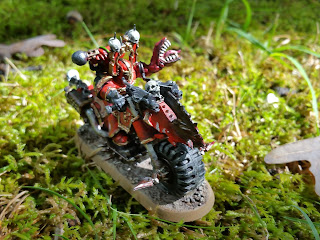 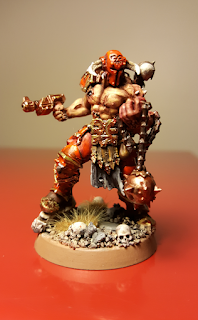 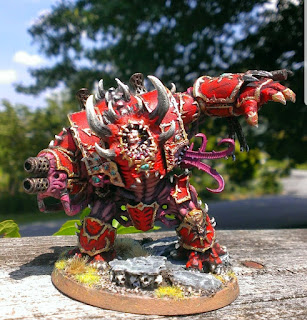 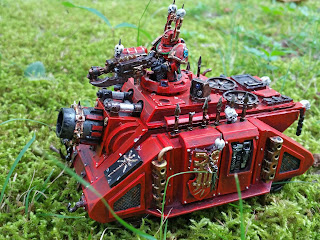 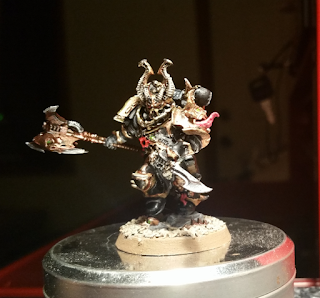 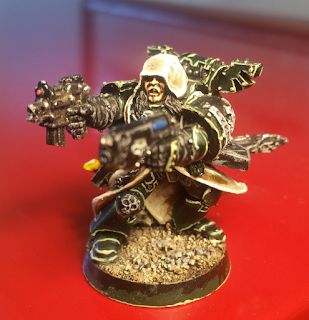 Cypher is probably the oldest paint job on this page, but only in recent times has The Fallen been anything more than just and accessory squad you could take to accompany Cypher. Now, since the Rise of Primarch and into 8th edition (and beyond), they can be taken as a bit more of a force. One day I hope to put something together for The Fallen as I like that concept.

Cypher
-This is the original miniature that came out in the late '90s. Personally I like it over the current plastic version as it is far more dynamically posed.

++++ATTENTION: THIS PAGE IS STILL UNDER CONSTRUCTION++++