Obviously 4th of July weekend was weeks ago, but as you might guess my schedule has prevented this update from being timely. During said weekend, I visited an old friend of mine in Cincinnati (we shall call him 'Doctor'), He was in the process of cleaning out a lot the extras and overstock that he has accumulated over a period of  2 decades of being in the GW hobby, and also working on his Dark Angels. While doing so, he noticed he had a lot more of the original Rogue Trader era Predator tanks than he thought! Which led to us discussing what the Iron Wing was supposed to be, and if GW were to ever elaborate on it, how they intended it to function etc. (The Iron Wing, BTW, was the mechanized vehicle arm of the Dark Angels, discussed only once - as far as I can tell- in early Epic materials), Then he pulls out the deodorant tank! 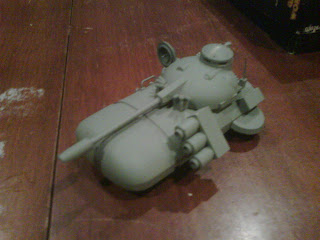 Yes, somewhere, he acquired this thing in a trade, we're pretty sure from an old HS buddy. The missile launcher on it's side is made from Legos! 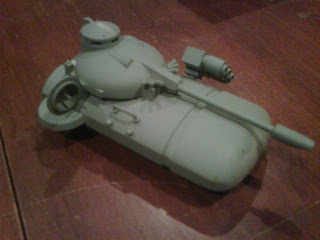 On the other side we have an oddly place satellite /radar dish which appears to be the hatch from a Rhino tank, as are the handle in front of it. 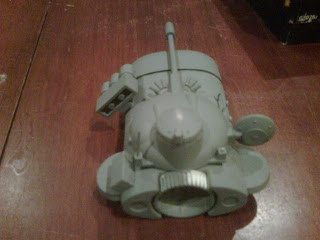 The turret is an actual original Predator tank turret, only that it doesn't swivel and is therefore set up for fixed fire. This was the reason the Doctor pulled this out; he intends to break it back down and restore the turret back to a Predator chassis. He told me this after I got such a great kick out of this that I even offered to paint it! "No, I'm going to reuse that turret!" 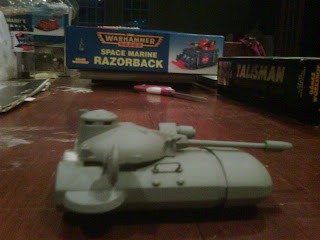 Back in the early days of Rogue Trader, anything went! The deodorant tank was merely the poor-boy's quick option for vehicle that look 'sci-fi-ish' with just the right amount of imagination and bit of paint. 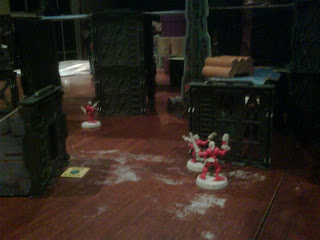 None of the models are mine, and most of these the Doctor also acquired in trades over the years. I played the Van Sars (in Xmas red) and he played the painted Orlocks. We spent some time setting up scenery and creating our gangs, and then we played. Here is my side of the field, with a Heavy (with a Heavy Plasma gun) hiding and in overwathc, with my Gang leader and the 2 juves. 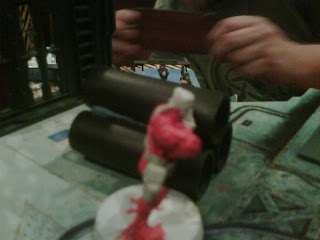 He got in the 1st shot of the game, pinning one of my guys on the tower. Here's my guy on the high spire targeting his two gangers. This pic was taken for LOS purposes was never intended to be a blogging pic, but why not? He has a pic of the same situation from his vantage point (if he sends it I'll post it). 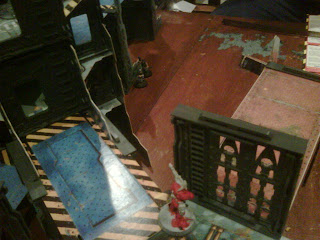 Here's my guy taking a shot at a target below. On another turn he'd throw a grenade through that window taking out a heavy and a his gang leader, an action that would force a bottle test which would end the game. The thing about Necromunda is, it's not ALL in the actual game, but the post game. We both did fairly well I recall, however next time we meet, he will be the one bringing in the giant-killer bonus! This is the 2nd time using Van Sar models I don't own to play this game, and I really need to commit myself to tracking those models down and painting a gang for myself.

Pods to drop and Lands to Raid (and Speed--Part 7)

Just when I thought I had left on a business trip with out my pics, I find them! So, here's an update. While last home, I found myself somewhat surprised to find that on e-bay the Land Raider Crusader bits I wanted to get extras of were going for more than the cost of just buying the sprue out-right from GW! Amazing! While pondering my next move I found myself working on the Landspeeder Typhoon that can be seen throughout these 'Pods to drop' articles (funny that I'm not currently working any Drop Pods, but I like the title!). So there I was working on the model, when I decided it was time to put the pack markings on their right shoulder pads. However I quickly discovered that trying to get a brush into those spaces, especially one dabbed in red paint, was far too messy and futile than I had suspected. If you've been following this series so far, you might have gauged that I like to build these models after I paint them to avoid having areas my paint can't reach. Therefore I was left with no choice but to get a bit crude and rip the gunner out!
Another thing that had bothered me about the gunner was that whoever the person was that assembled this model (I think I wrote before that I pulled this out of a garbage can at an old FLGS) was trying to get a more dynamic pose for the gunner, so their solution was to hack the bar that the gun is supposed to be mounted on, so that it rested lower. When I reassemble this, I will remount the gun back onto the bar, and just apply 'battle damage' to the area with the damaged bar. As you can see with this pic, the driver has a vast area where my paint was not able to reach, as well as the back side of the gunner and the area he sits at.
This other pic shows that the gunner's legs were difficult to reach too. I know that while being used in the game, the likelihood that anyone would spot this would be slim, but it would just bother me if anyone could.


Here is the detached gunner, and you see the very limits to where my paint could reach. Again, although the likelihood of the gunner's back being spotted is slim, the shoulder pad would definitely me an annoyance.
Here you can see that I did the base coat for the pack markings and touched up the Shadow Gray base coat.
Another thing that bothered me was the tail of the Land Speeder. In the top image, you can see that the previous owner put it on backwards. While liked this because it distinguished it from the other one I have built already, I always thought it was a bit fragile. Scrutinizing it while working on it, I decided that this was just fricking stupid, and tore it off. After all, the 'flaps' were backwards!
It's subtle, but you might be able to detect a slight 'bowing' in the center of this tail. Not sure how to fix that...
Here you can see that I have touched up those hard to reach spaces. The driver was secured a bit too firmly, but having the driver out was enough to enable me to get a brush into those tight areas. Having base coated those spots, I then applied the pack marking base coats. This picture really shows off the barren spot where the heavy bolter was, and where I'm going to have to apply battle-damage.

And this is pretty much were I left off! More updates on this, and the Land Raider, in about a week!