Another report from the warzone!

I was able to take some pics this past weekend for 2 battles fought at the local hobby town. Masta Chief wrote up a big report using the pics I took, and you can read it here. He used his Exodite Eldar in a fight against their Dark Kin led by Archon RTVoril. It was a lot fun to watch! 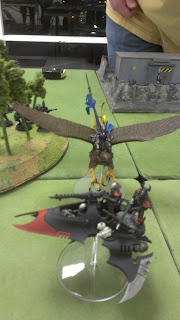 That battle seemed sparse, and indeed it was considering the model count over on the next table: Chaos and Imperial Guard vs. Tyranids! Not sure if anyone is planning to use my pics to post a battle report of this one or not, but I sure did take a lot of pics of this game! 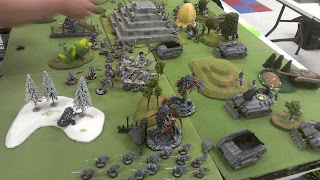 It was crazy fun to watch, and utterly horrifying to see the Doom of Malan'tai in a situation where it was unstoppable! 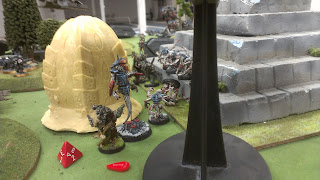 As far as my hobby out-put this week is concerned, I did very little, but I did get further along with the painting of the 2 Space Wolf Rhinos. Saving those pics for the next post specifically about them however.

Return of the Exterminator Part 1

It's been mocking me for years. 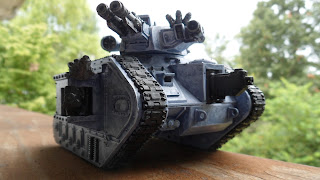 I started on the construction of the my Space Wolf Leman Russ Exterminator way back in 2004. And got about halfway with the painting. I used it in the 2 games of Warhammer 40,000 4th Edition that Warfrog and I played. It performed well back then, the BS4 heavy bolters and autocannon were a nasty combo to lay down against a typical foot unit. But I never picked it back up again as other projects had snared my attention (mostly WHFB related). When the Space Wolf Codex was released during 5th edition I was disappointed to see my wicked little tank deleted from the roster....very disappointed.

My Imperial Guard can use it, I know, but my army is far from field-able at this stage, and well, I hated the idea of stripping it down just to repaint it a different shade of grey! (Although Da Masta Cheef is quick to point out that my army isn't gray, it's baby blue! LOL) 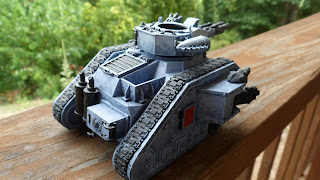 So I did nothing with it. I requisitioned the storm bolter and gunner who is now residing happily on my Land Raider Crusader (hmmm...I should finish that, huh?) but I just couldn't decide what to do with this tank! Until this new, shiny 6th edition of Warhammer 40,000! This edition brings allies back in a big way, and although it's been subtle in my posts, I have slowly been tinkering on my IG army in between painting Bastions, Rhinos, and Fighta Bombas (none of which are complete yet!) as something I can mix with Space Wolves. Thus, my Leman Russ Exterminator is back! -All I need to do is finish it. However, as I sort have been sarcastically noting, I have a habit of not completing everything, at least not in what my fellow mortals consider a timely fashion anyway. I envisioned when I stuck on the wolf heads above the sponsons that I would sculpt more fur on the the top using green stuff as the heads just floating there look odd. I know this will take me some time to pull off.

I will replace the storm bolter, sans a gunner, in the event that in the next Space Wolf codex this tank suddenly reappears (GW is good for pulling tricks like this) and having an IG gunner up there in a Space Wolf decorated tank might look weird, and having a Space Wolf up there would irk me considering I will be using IG stats (BS3) although it might be a funny gag to say that the worst shooter In the army is forced to ride in the Executioner for the next battle until he can figure out how to shoot! LOL, -but considering how poorly my Space Wolves tend to shoot, the whole army would end up riding in "pray 'n spray" mobiles if that were the case! So, I will simply leave the storm bolter up there with the hatch closed. 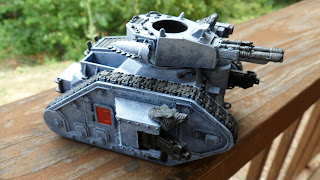 Anyway, here it is. Or was back on 7/4/12 when I snapped these photos. The idea has been in my head at least that long but other projects kept putting it off. With the recent work on my rhinos, I decided this ought to get moved up on the production queue. Look forward to an update on this one some time in the New Year!
Posted by neverness at Thursday, December 13, 2012 2 comments: 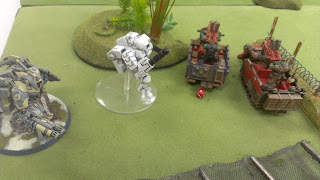 This past Saturday, I was working too late to join the boys for a good old romp in 40K land, but I did show up and take pics of the game between Screech and Da Masta Cheef! I sent these to him so he could do a longer than usual battle report which shows off a full deployed Long Wayz Dezert Groop in action against Screech's army of allied Tau and Guard. It also got us some nice pics of Da Cheef's ork minis in a cool battle setting. Check out the rest of my pics (BTW: Cheef used the best ones) and enjoy the report:  green-iz-best-when-fightin-da-oomies
﻿

And if you found this page by following Da Masta Cheef's link, thanks for checking my blog out!
-Joel