Waaagh all night waaagh all day


Finally, after far too many cancellations, the nefarious Masta Cheef and I had our Ork vs. Ork battle that we haven't had in far too long. We both took a copious amount of photos and he already did a blog entry about this as well (in fact he took that great photo above of my warlord in the trukk). We have had a lot of Ork vs Ork games over the years but this one was very different as I would be fielding a list using the current 7th ed Codex and he would be using the 4th ed Codex.In order to make this encounter work, we both agreed to leave the weirdboyz at home.


Cheef won the roll-off to see who places first. I gulped audibly when I saw how many vehicles he had compared to my one trukk!


I pack my troops into the terrain as well as I could, with biggest mob in the middle and pointing straight at the ork fort. The lootas I placed up high in the ruins so as to maximize their potential and cover. The artilery were placed in the back on a ridge. 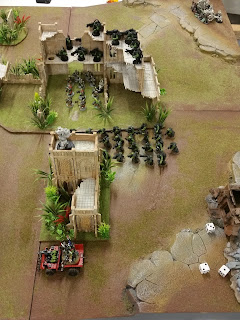 Turn one and the sneaky git steals the initiative! He surges forward, blasting as he goes. All of my dice rolling were shockingly bad, seriously, I rolled no die higher than a '3' costing  quite a few of my boys their lives or a wound.

The end of my first turn changed the picture rather dramatically. Having switched out dice, suddenly my old crappy GW dice wanted to roll hot. I managed to cripple most of Cheef's vehicles and the Shokk Attack Gun dramatically annihilated the Grot Spee. Cheef was really upset over this, he totally hates it when this dies, but hey, after it put a wound on my Big Mek it had to go!


On turn 2, my Trukk carrying my Warlord and my unpainted Burna Boys was immobilized with it's weapon destroyed. So it sat there smoking for the rest of the game with one hull point left,

Charging Burna Boyz is never a good idea however...

Never-the-less, a fight was still to happen and Ror-Ruk found himself in a challenge with this scary looking character. Ror-Ruk snipped his appendages off with 'is powerklaw, however the burna boys themselves were all cut down by grots and goons.

That melee carried over into my my turn 2, Ror Ruk found himself in another challenge this time with Schultz! 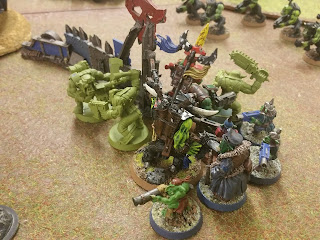 Cheef thought he was kunning by sending his wartraks around the flank to assassinate my Big Mek, but a well placed Shokk Attack template but an explosive end to that insurrection.


Eventually my Shoota Boyz (who really were shooting the hell out this place) rush in and assist their Warboss.
That "other fight" was an 11 ork squad of mine that attacked a Big Mek on a warbike, and they had been locked in combat for a few turns. However before my boyz could get there they were jumped by Cheef's Tankbustas, who were riding around on the top of his Battlewaggon, Da Matilda, for the whole game. It was stuck on some ruins, tearing up my Lootas, while my Shokk Attack Gun and artillery failed to do a thing to it.

At the start of the next turn my idiots fighting the Mek on the Bike, fail combat and break away, somehow not getting run down, while the warbike backs up, and sets up for another charge!


The game ended at this point, and the following pic is the last one I took, of my Warboss taking selfies outside of his new claimed fort.


It was a fun game, and a good victory for Ror-Ruk's Reavers.

But more importantly, it was a better insight into this current Ork Codex than my previous go with them. The changes that were made to army from the previous codex seems so stupid!

I did however like that the Shokk Attack Gun has the potential to produce a Vortex, but it will be a cold day in hell before I ever roll double-6s on that chart! (And I agree with Cheef, I really should paint this model finally, he really earned it this game!).

So, new Codex won vs. the old one. However, our armies were composed quite differently from each other, the diversity of which has been one of my favorite things about ork armies in general. But that diversity makes the outcome of a match like this difficult to blame or credit a Codex or edition on.

From my original bag of Harlequins I ended up thinking I had far more than I would ever need. So confident was I in this thought that I even gifted some away so that more Harlequins might hit the local battlefields (which they did, against me!). In recent times we are seeing GW actively bringing into production models that have only existed for decades as concepts and images in the WH40K's background, and one such boon from this is Codex: Harlequins. Reading through this book has been fun and inspiring and I think they would be a lot more fun to play with than their "win button" Kraftworld Kin.

As I touched on in the previous post it has inspired me to paint up some Harlies using The Reaper's Mirth Masque color scheme. Unlike last time, here's a bit of a step-by-step on the 2nd model:

The final pic shows the model almost done. With the white areas now white, the gold applied over the Tin Bitz, and the harlequin icons hand painted on. The hair is currently white and I am debating whether to give her a traditional rainbow color job on her amazing hairdo (I am a child of the '80s for sure).

Also, here is the the first of my five Deathjestors to get some paint. 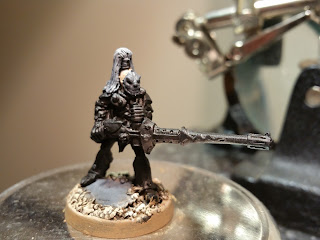 More updates on this army will occasionally be posted as I really am just clowning around with them at this point.
Posted by neverness at Monday, February 15, 2016 No comments: