I discovered that I had some pics in a storage device that I need to clear that I never posted. So here they are: 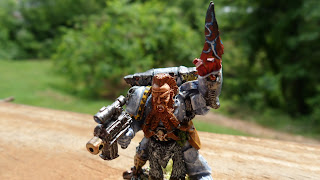 This guy is a Wolf Guard that I painted around 2001. I still am quite pleased with how it turned out. For some reason I can not explain, I was thinking that the last ork weapon sprue that GW was putting into their blister packs towards the end of 2nd edition had a bulky crudeness that, with a proper paint-job and scope, looked fairly fitting for the Space Wolves. I'm not sure I have that same opinion these days, but this model works I think. 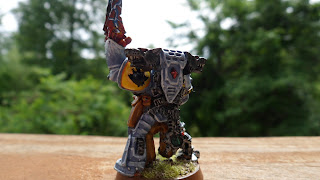 In this pic you can see the Auspex hanging from his belt,  which I painted some details on to indicate that it was on. Also the decal worked out well on the left shoulder pad. The key is to repaint over it once you've cut out all the air bubbles...:) 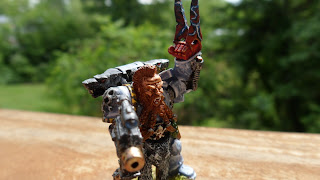 The model is supposed to have a power fist, but with the addition of two combat accessories from the original plastic Space Marine kit (RTB01) and some electrical FX, this guy now has a pretty cool looking lightning claw! 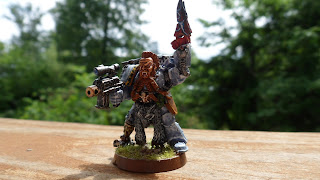 Per the fluff, I leave the "older" marines a tanner color on their skin pigmentation. The Blood Claws, when I get to them, will be quite lighter skinned. 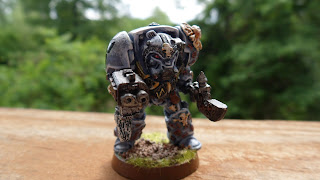 This Rune Priest was also shown in a previous post, but this is a different angle. Note that most of the painting was done by Rob, the local hero whose 28mm combat is matched only by...well, it's debatable. But he's a swell guy, and I acquired this model in a trade. However he only had this model painted up to a Shadow Grey brightness, so I completed it by applying the next two highlights, and added more highlights to the bone areas. I'm really pleased with how it turned out, considering that I only did the mid-stages and the highlights! 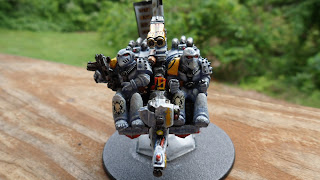 I can't recall if this exact pic has been posted already, but I know I have already discussed this, so all I will say now is that I am completely determined to get that base completed before the new year! 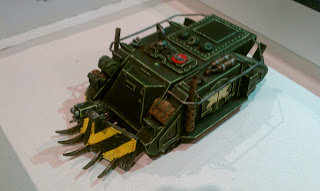 Work on my own minis has been slow, and what progress I have made is sort of not blog-worthy (at least not yet) so before I dash our of town again for business (with my portable Neverness Kit of course) I figured I would post the rest of the Dark Angels that I painted back in '99 for my old pal "the Doctor", who, for professional reasons, we've agreed to keep his identity vague. 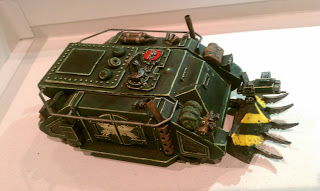 Any way, what we have here is a Dark Angel's Rhino based off the original Rogue Trader era plastic kit The dozer blade is from the 1st vehicle accessory sprue that came with the Leman Russ tank models. I watched him cut the thing right in half, trim it a bit, and re-glue it. Such a simple conversion, yet I know I would probably screw this up bad if I tried it myself. The end result was a far more dynamic dozer blade, with the more of a vicious plow effect going on. I can imagine this thing plowing it's way down crowded streets...anyway, you get the, um, point! 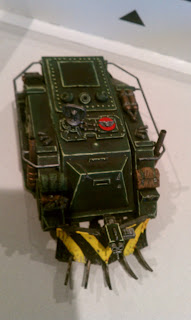 Yes that's a storm bolter in the front of the plow. He decided to do unique customizing to the top, using the metal components from the 2nd edition era Whirlwind kit. Unfortunately this left no where for the storm bolter to go, so we stuck it there after having a good chuckle over it (more on this in a minute).

This next pic is the rear hatches. I do not recall why he decided to make the rear doors that way, but I suppose it works. 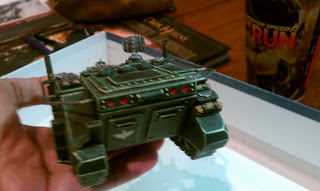 A note on the twin barrels for the exhausts. I really wanted them too look old and weathered. Sort of belying a greater sense of age to this machine than the paint job would suggest. Also, according to the doctor it was my idea to make his Dark Angels be from the 2rd chapter. I supposed my only reasoning for this was that I liked the way the Red contrasts against that dark green. The red on the top hatch is solid primary color, which I wanted have pop has intensely as I could get it. All these years later I still think that works well.

Also, all the satchels and kit all over this Rhino came from the Tamiya kits for customizing WWII kits that you can get pretty much anywhere. 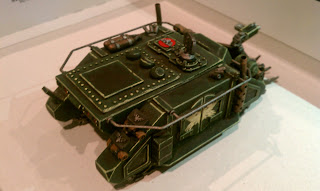 Now in case you were wondering why this rhino has such a strange big flat area on it's back hatch... 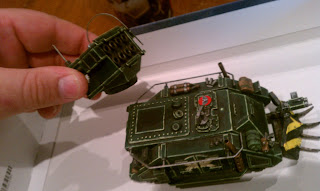 ...it is because it is not always a Rhino! 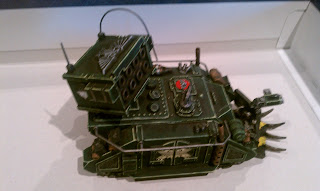 Presenting the original version of the Whirlwind. This is the result of following the instructions in White Dwarf 117 (someone correct me if this is wrong!) for scratch-building Whirlwinds! This is what they looked like in the orignal Epic games as well. The coversion was mostly plexy card, the bottom of the large 30mm monster base, and an extra set of the hatch handles from the Rhino kit. And a flat magnet. 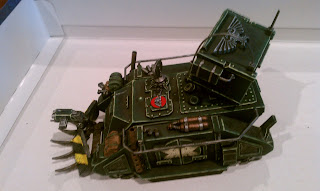 The pulled back antenna are just brass wire, but we both agreed it added to the effect. You can also get a view of my least favorite decal ever, the 2-part whirlwind aquila for the side doors. Doc insisted on using some bonding solution from somewhere that has caused it to yellow prematurely. I couldn't talk him out of it. Still, I have never seen this decal look good on any tank, accept the 'eavy metal team's tanks...but ultimately i think it works here well. I think on future tanks he should use a 3-dimensional aquilla instead. 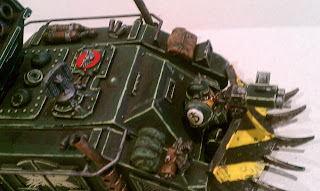 Ok, so was had this HUGE area that opened up behind the dozer plow, and we had no where for the storm bolter to go. So we came up with this bizarre hazing ritual: stick a guy right up front! Imagine the hail of expended shells discharging rapidly from the blazing storm bolter while this scream guy ar the front is yelling "yeah! Get some! yeah!!!" at the top his lungs. Also, we added ALOT of sublte battle damage to the front of this take to indicate that most of the guys going through this hazing, probably don't live through it... 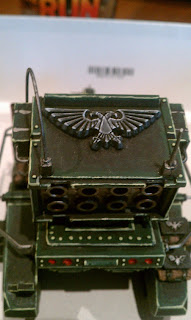 And finally, the aquila is from the metal Thunderhawk kit.
Alright, that's all for now. Any questions? Just leave a comment!