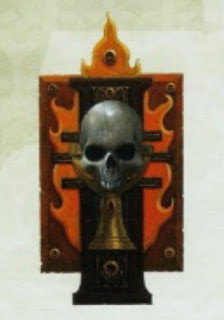 And the date has arrived and so have the Inquisitors of The Holy Order The Emperor's Inquistion. The three major Ordos*, Ordos Malleus, Hereticus and Xenos respectively, are all represented here today. Some have brought retinues, servants, serfs and servitors to accompany them and all seem to have brought a servo skull of some function or other which are all buzzing about. So let's tarry no longer and see (in no particular order) who are now taking to their seats...

Inquisitor Oblivianna and her retinue have mustered around at a spot closest to the buffet table. The Squat in her company is already suspected to have tinkered with the Food Servitors in an effort to accumulate larger food portions.

The Inquisitors of the Ordo Bob are gathered in one section, they seem to be conducting a meeting of their own, no doubt discussing the machinations of their overlord, The Bob.

Inquisitor Jorus Ryloth of the Ordo Xenos was seen speaking with Inquisitor Greyfax in regards to the "alien menace" and discussing some of his favorite methods for their disposal. (You can see more regarding him at 1st Legion Chronicles. 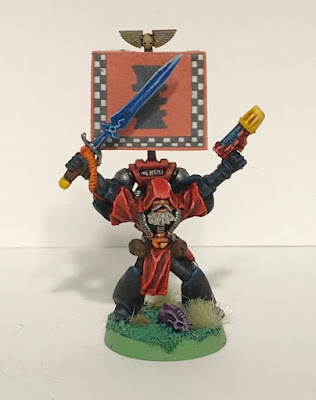 Speaking of Inquisitor Greyfax, Siph over at Weemen wrote to me:

"I hadn’t planned on doing an Inquisitor, but you made me do it. Meet Inquisitor Greyfax, with a slimmed down Condemner Boltgun, a sensible helmet (Skitarii Vanguard Alpha) and a less steampunk backpack exhaust..."

Lumbering into the room, ancient servos growning with each thudding step, strides Inquisitor Lord Hiser the Hisarion of the Ordo Malleus. He is followed by a servitor pushing a trolly loaded with dry rubbed spicy chicken legs (according to the Munitorum packaging). Upon sitting at the massive table the others all begin to take their seats as well knowing that business is finally about to be conducted...


And as I was finishing off this post  Waaarghpug slid in a literal photo finish with his Ordo Xenos Lord Inquisitor Kyria Draxus. And yes, I too think I like her better with hair.

Never intending to be late to the Conclave, it's always an impressive scene to arrive when everyone has already gathered***.

Also, honorable mention for Zzzzzz who was trying to get his model done on time, but just couldn't make it happen (again, check out *** below) so he sent me a link to a compilation list  of Inquisitors he has painted in the past for us to check out.


*The minor Ordos make quite an impressive list. They are compiled, along with the history of the Inquistion, at this wiki.

**I think any way, maybe he is just a generic Inquistior?

***Not quite fashionably late, but YOU have that chance to be just that. If you started a model but just couldn't make the deadline, that's OK, you have until September 1st to email me your "fashionably late" entry!
Posted by neverness at Sunday, August 30, 2020

Aww no! I thought we had until today to get them done. I just posted mine up this moment: https://steppingbetweengames.com/inquisitor-greyfax-completed/

Great work everybody, looks like the Inquisitors will be out in force for sure.

Closer to the buffet table eh? Well, then I must state that any and all knowledge or association to the Buffet Assault Group is purely coincidental...


I was fully expecting Pug to steal the show (as usual), but I dunno, Siph is definitely giving him a run for the money!

One day, I might create a little photo booth set-up to try to make my minis shine... but today is not that day!

I've fallen deep into the "grimdark" style (which kinda just popped up out of nowhere? But it definitely fits exactly the path I've been treading with my style for the last few years) and I am pushing myself to try to be ever-more "Blanchitsu" in honor of the Great Master Himself Himself.

(Besides Cheef I'll be honest, yours is actually my fave, wish I'd have thought of it!)

I have a rarely utilized photo cube you're welcome too, though you can't have the kitties who make frequent appearances it it whenever it IS used.