As I sorta prefaced in my previous post, The Bob and I played Warhammer Fantasy Battle 8th Edition this past weekend. This was my first game in about a decade, and it has been a long time for Bob also, so we were treating this game as a bit of a refresher. It was a standard 2k pitched battle.  Despite the rusty rules knowledge, I went in with an open mind and a desire to push these greenskins as hard as I could.

I brought 2k points consisting of:


Bob tinkered on getting a list he thought would work for reintroducing me to certain situations that occur in WFB, and this is what he brought.

I place my Warboss with the Big Uns, the Orc Shaman with the other Boyz unit, and the Gobo Shaman with a Night Gobo Unit. Bob put his Prince with the Silver Helms and left the Mage unattached.

Amazingly, none of my units gave in to animosity. Most of my units moved forward, some faster than others, in an effort to engage the fearsome High Elves before them. The chariot whipped the boars in a full throttle boost towards the High Lines.

The only action on my turn that resulted in a fatality was one of the Gobo Shaman's spells (Vindictive Glare) snuffed out an Archer.

Bob returned that insult and the Archers shot a volley into the Gobo Shaman's unit slaying 6 of the gits.

His Seaguard fired a volley into the Boar Chariot that was rampaging towards them putting a wound on it.

All in all, it was a fairly soft opening of the game...

More maneuvers performed with the stupid Trolls actually moving where I wanted them to go. The Spider Riders failed their charge on the Silver Helms but the Snottlings that I sent in to support them actually make it in!

Guess who won that enounter? (I hope you didn't say "the Snottlings"...)

The Chariot impacts into the Swordmasters wiping out a whole rank from the impact hits. However the speedy elves are quick to bring down their blades, destroying the chariot swiftly and abruptly.

Showing her magic muscles, the High Elf Mage cast Soul Quench at the Trolls with Irresistible Force! Killing a Troll. She detonated as a result but since no one was in base-to-base with her no one died (much to the relief of Bob).


The three remaining Dragon Princes easily routed the Night Gobos but they elected not to pursue them.

Failing their animosity test, the Night Goblin Archers charged the Seaguard. ("Idiots!" I declared in disappointed awe). The other two Fantaics were released, one went toward the Archers while the other, emerging from the charging Night Gobo Archers, towards the White Lions. The one that crashed through the White Lions destroyed a whole rank as it took out 6 of them! The one Night Gobo Archer unit that attempted to charge the Seaguard lost 7 grots to shooting, paniced, and routed!

The Big Uns, led by the Black Orc Warboss, charged the Dragin Princes. The the Princes were defeated by the raging Orcs. The Warboss challenged the Champion and bashed him to death but not without taking two wounds himself!

Set up for a perfect side flank charge, the Silver Helms charged the Trolls. The Sword Masters charge the Orc Boyz with twin weapons, and the Lions charge the unit of Gobos who have yet to run away.
Magic phase results in another successful Soul Quench killing 4 Arrer Boyz causing them to panic and flee. The White Lions paste the Gobos with ease and over run into the Gobo Shaman killing him also.

In the middle of the table, the Swordmasters and the Orcs have a tied combat!

The Silver Helms and Prince engage the Trolls flank. They fail to wound the Trolls thanks to their Regeneration. The Trolls are fairly ineffective in turn. The Silver Helms horses however inflict two wounds killing an already wounded Troll which forces a Break Test. A Break Test against Initiative of 4. Which after modifers would require that I roll 2 ones on 2d6. Of course I botch that and these Trolls bolt it out of there. What do I roll on 2d6 for their flee distance? A two. A frick'n two when I absolutely needed that a moment before! The Silver Helms easily ran the Trolls down.

I was utterly beside myself and my morale was genuinely crushed.

It was tough to continue after that, I wanted to fold. Over half of my living army was in route and the High Elves seemed unstoppable. But I pressed on. The Goblins on the table edge failed to rally and bolted off the table. The Arrer Boyz and Spider Riders did rally, which was a refreshing turn.

The Fanatics rampage through the enemy lines again, killing 3 Archers and 6 Seaguard!

The Big Un's charged the White Lions. My Warboss issued a challenge to their unit champion which he accepted. The Warboss slaughtered the White Lion champ with ease however the faster White Lions massacred the Big Uns leaving only one survivor and the Warboss.


The big tussel in the center continues as Sword Masters and Orcs whittle each other down. The Sword Masters actually lose combat but do not Break thanks to the proximity of their army's battle standard ("cor...we need one of doze!" Says the befuddled Orc Shaman..)

Having lost way too many elves to the Fanatics, the Archers and the Seaguard shoot the fanatics to death ending their threat once and for all.

The White Lions finish off the Warboss and the last Big Un.

The tussle in the center continues as the Orcs crush the surviving Swormasters but still take more losses due to the arrival of the Silver Helms crashing into their flank. Again, it was those hits from the steads that were the deciding element The Orcs don't break (by some miracle) but there is simply no way they were going to survive another round.

We called the game at this point, despite having rallied some units, I doubted that they could effectively do any more than harass the High Elves. Clearly the Orc battle line was shattered and we were now in the mopping up stages.

With that epiphany, the High Elves take the day!

All-in-all, we had a good time. My lack of recall on certain rule elements and tactics regarding the Night Goblins and the Trolls (especially the Trolls!) Cost more greenskin lives that could have been otherwise prevented. I say that, but...my dice.

The Fanatics impressed me more than I thought they would and clearly I need more. But only if I stick with the Goblins. It's really Orcs that I need more of as they aren't only a bit tougher and more effective in combat but their Leadership is better. Bob was suggesting that I acquire some Black Orcs, but making additional purchases for this game is something I am hesitant to do at this stage but I shall ponder upon the notion further...

The High Elves were awesome against this army. I was especially impressed with the Silver Helms who were just so tough to kill. And his damned horses...in our post game discussion we named the one that routed the Trolls: Equis Tyranis.

We'll see what happens when we try it again...

It was a fun game and great to get the Elves on the table again! I think this could have easily gone the other way if the dice gods had decided to favor you more. The Elves can dish out the damage but usually can't take much in return. I definitely want to get more games in. The Empire and Dark Elves need some table time

The ONE TIME you actually needed to roll a couple of ones...and you can't even do that!!

Seriously, sling shot those dice into the woods!!!

This advice is coming from a guy who sells off uinits -heck, whole armies!- when they fail to perform for him in battle, but never replaces the dice that were the true reason for the results he got. Yeah, Okay.... 😂 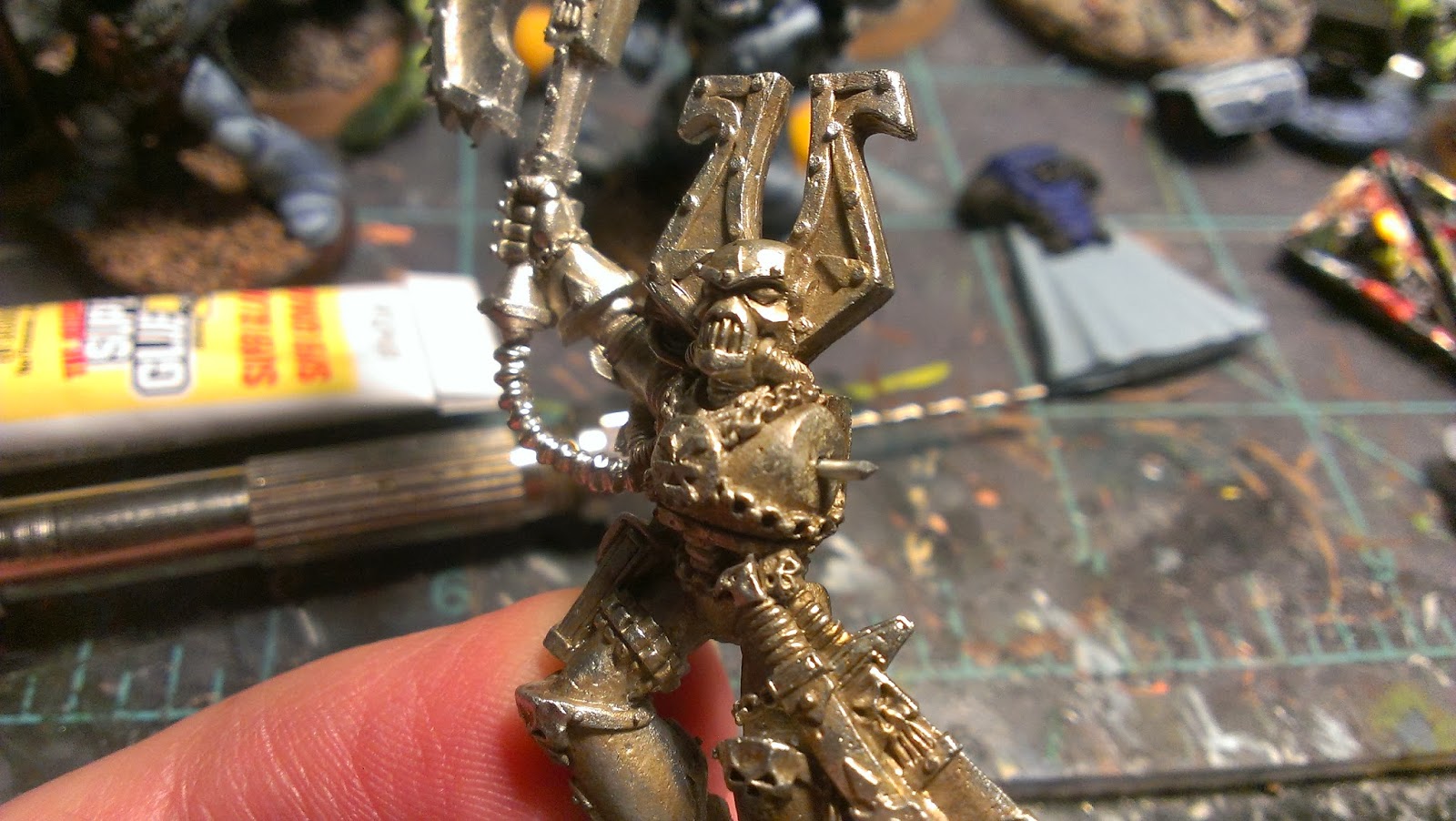