It's time to paint a Mekboy for my Blood Axe detachment. Some of you may have seen this chap before as I had originally started this paintjob with the intention of using him for a Goff themed Gorkamorka gang. That project fizzled out and he has been stuck in the queue ever since. While accessing my paint queue back at the New Year I found this guy lurking in the back of the pack and it occurred to me that he fit my Blood Axes so much better than he did the Goffs. And so, here we are,

The first thing I needed to do was get his base extended out to 32mm. After attaching the base extender onto the model I gritted it up and started the process of painting it. Then I colored the cap and uniform (unlike other orks, Blood Axes truly believe in uniforms. Well, theoretically anyway.) Tamiya Color Acrylic Paint Olive Drab. The stuff coats good and it it's nice and dark over the Chaos Black primer.

After this I launched into this full throttle, after all my window to work on this was very small. I liberally washed Agrax Earthshade all over the Olive Drab. After that I added Castellon Green over that layer. A final highlight of Loren Forest was applied to finish off the Olive Drab uniform.
I decided to paint the apron to appear like it's leather. I think it looks good over all, and doesn't clash or overwhelm the Olive Drab. The tools contrast nicely against it also.

The accessories were fun to do also, particularly the oily rag hanging on his side. I tried to paint the yellow and black stripes on the band that does around the cap to sort of resemble some of the Blood Axe art that I remember seeing from way back in the day. I wanted to make the toolbox rough and worn as well. You might notice I got some black on the back of his hand. Instead of fixing it I figured it's best to leave it alone. In fact, as much oil and grease this guy's going to be exposed to I ought to add more, like all over the model!

But I resisted that urge, because I was really digging how this miniature is turning out over all. So, after a few final touches it was time to add the flock. -But I almost missed a step!

Sifting through my decal collection I came across this old Mekboy icon. I was originally looking for a Blood Axe one to add to him but thought that the specialist badge made a lot more sense. Since the decal's probably close to 30 years old, I added a layer of 'ard Coat over it to secure the bond. The only thing left to do is spray a protective coat on him to reduce chipping since he is metal. But I will have to wait until it's a bit warmer outside for that.

And presto, it's done! And a very fast turn around time it was! I think I'm going to like painting Blood Axes. I find them to be way more easier to paint than Bad Moons or Goffs. Having said that, I ought to finish those Blood Axe Boyz I started on back in 2019 'ey?

As quickly as you cranked this guy out, yes you ought to finish off those other Blood Axes!

Thanks, but yeah, probably.

This project is coming along nicely, even though I have had to slow down on it a bit. I have opted to not build the full crew for this o... 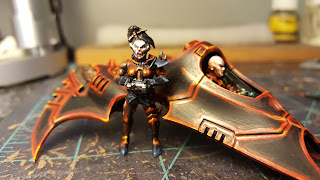