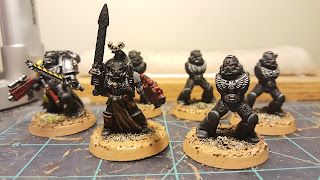 ....well, they were for many years anyway. About 5 years since I last messed with them actually. I was recently inspired to work on them again and the first thing I did was a Chaplain. There is a few reasons for this: one reason is that they are part of the paint queue I resolved to tackle back in the New Year, and the other is that next month is Inquisitional Conclave month and I want my Inquisitor to arrive with a group of Death Company in tow.
One of the reasons I didn't finish these guys was my indecisiveness regarding their weapon load out. I overcame this by deciding to build the two squads from the Death Masque boxed set that I've been holding onto for the last 5 years. I decided to build them exactly as presented in the Death Masque scenario booklet. The Veterans are Squad Crull and the Vanguard are Squad Galatalel. The left over bits will be used to equip 'Klll Team Neverness' (yeah, expect that name to change).

Now I am still building these guys but I want to prime them and basecoat them prior to assembly. But before I got to them, I noticed that the guy with the heavy bolter was mostly done. He's also the trickiest to assemble. These hybrid metal/plastic kits could be a pain to put together and I suppose I procrastinated ever doing it for that reason.

I have recently discovered superglue gel, which is really good at not only getting these bits to adhere but it forms a secure and strong bond when dry.
Weirdly when I bought this model it's blister  pack was missing the left metal arm. I hadn't realized this until it was way to late to do anything about it, so I constructed my own replacement; It's crude but effective. The crude bits will be covered up by the Death Watch shoulder pad.

Once that was attached I slapped on the pauldron and the model was complete. I did a few paint touchups as I went along but all-in-all I am fairly happy with the finished model.
This marine originally came from the White Consuls  chapter. Back in the '90s I was going to make a generic (or is the term 'vanilla' the preferred expression these days?) space marine chapter and it was going to be White Consuls. But painting an entire army where I had to hand paint the chapter icon soon lost it's appeal to me. I did feature the White Consuls in a comic that did in the late '90s however...maybe you'll see that in a future Art Monday post?

When the weather allows I will spray some sealant on him to reduce chipping on the metal components. But despite that step, he is done.
That's one down! What a weird feeling it is to finally finish one of the oldest miniatures in my queue. I look forward to completing all these Death Watch Marines!

Haha...(oh, choke on your juicebox)

...I mean, with the established record, it's difficult to refute it...*sigh*

Inspired by the recent  Ork vs. Ork  game that I played, and needing to get these guys off my table, I decided to kill a bit of time by base...