This is a termagant on a cliff overlooking a newly claimed world for the Hivemind.  I tried to make it look more like the original Rogue Trader era model but fused with some of the 40k Second Edition era design. And yes, that's a spike rifle. Weird that the miniatures for that were only ever released during 2nd ed, but there have been rules for them in a lot of editions afterwards, in some form or another, whether in a codex or an FAQ. This piece was sent to Inquisitor Magazine and they agreed to print it but instead they went with another termagant that I drew that was armed with a Strangleweb (which was another 2nd ed era weapon that has yet to reappear). But I always liked this one more than the other one. 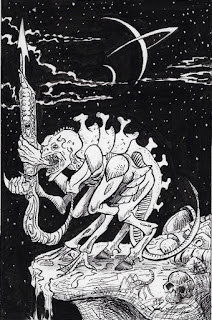 I am not sure what that scorpion-nid thing is on the rock... in early tyranid art they used to depict all sorts of weird bio-critters that used to inhabit their hiveships. In the army list for Tyranids that appeared in White Dwarf 145 this role was given to Squig Swarms. According to the background given for their entry a bunch of orks were bioengineered into the squigs. The squigs that appear in ork society today were evolved from those liberated from Tyranid hive ships. Thankfully that fluff never reappeared anywhere because it just didn't work from a continuity/timeliness perspective. And it was... stupid. But I must have been thinking about these things when I did this drawing.
And this completes the four illustrations that were done on this page of bristol board. I thought you might like to see them altogether. 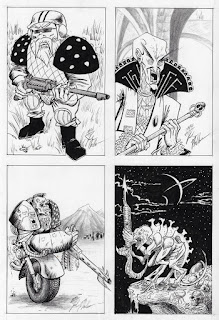 I hope you got a kick of this, see you next Monday for something else.