Here is a Sister Of Battle/Adepta Sororitas blasting away with her bolter. This was done after the SOB line was launched at the tail-end of Warhammer 40,000's second edition. I had explored a Sister earlier for a piece that was published in Inquisitor Magazine that was popular at the time, but I really wanted to draw this design. This was my first attempt at it. It's done in a style that I was playing around with back then, and I like how 'clean' my line work is. If I were to do this today I wouldn't have her as 'skinny' as she appears, and I doubt I would have her shooting that massive bolter one-handed as depicted here. This was done in pen & ink. It was going to be included in BMQ, a fanzine that Dr TSG and I were working on back then (don't look for it, it never made it to press). 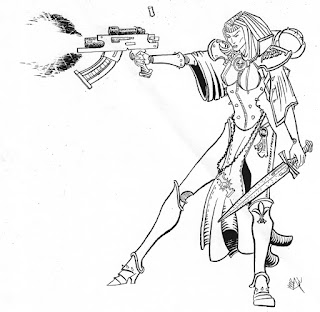