It's actually a Rhino and a Razorback (I was being cute with the names on the title). Sorta. You see I am buying this thing so that I can use this vehicle for either a Rhino or a Razorback by simply swapping out the back hatch for the twin linked heavy weapon base.

I bought this thing for a 'Tanksgiving challenge' (i.e. paint a tank in November) but there was no way the events in my life would let that happen. So instead I decided to kick off the New Year with it.  I haven't built this version of the Rhino before. Yeah, I know it's been around for over 20 years now, but I haven't had a need for the "new" version until now. I have quite a few of the old ones however, and I think they do the job just fine. I have never built a Razorback before in any version, so I decided to make this into one. But I am really enjoying this kit so far and it's been a fun highlight to this whole Deathwatch project.
I built this in slow stages, using rubber bands to apply pressure so that the glue can bound better and reduce gaps. I get a kick out of models with interior details and this kit was no exception. Although I wonder how tore up that console is going to get by the bulky armored Marines scrapping past it when it uses the right-side door. It could also explain all the marines that died in previous editions who couldn't get out fast enough when their vehicle exploded...

The console itself was a lot of fun, I just painted the screens with White Scar and then applied a few washes of Tesseract Glow over that.
The interior was spray painted with a brown color. I dry brushed a metallic over tthe flor and batch for the final look. It leaves those areas looking a bit weathered or dirty which I think works well. The walls were done using a leather brown color and dried brushed with a sand stone. Again, it looks rough, worn and dirty, which I expect a well used APC to be.

Here you can see the interior is done. I don't see any point in detailing this any further as anyone seeing this is only going to get a fleeting glance of it when the rear hatch is opened. But I enjoy a level of satisfaction just knowing that it's there. 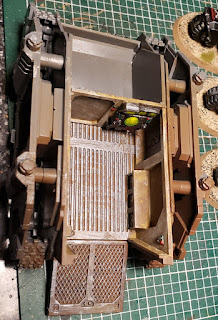 But before I moved on, I just had to add a bit of graffiti...

After this, the assembly continued. The top hull was attached and again I employed rubberbands to secure the tightest bond. 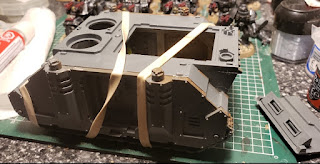 It was at this point I decided to make it so that I could switch out between a Razorback and a Rhino. And I am building it so I have the option to use, or not use, a Hunterkiller Missile, Stormbolter, a searchlight* or just an empty spot in case there is no points available for the nifty extras.. The top hatches just fit right on, and I am not even going to bother with magnets.

Next I will build the Razorback weapons before moving on to the rest of the painting.

*I come from a time when these were seriously relevant.

Thanks. Yeah, I am sucker for the interior. When I used to build model planes as a kid my favorite areas to do were the cockpits and pilot details. Also, checkout the earliest posts on this blog concerning my Space Wolves Landraider if you want to see more interiors.

For this part of this series I want to take the opportunity again to share with you how I get the bases of my models looking the way I do, s... 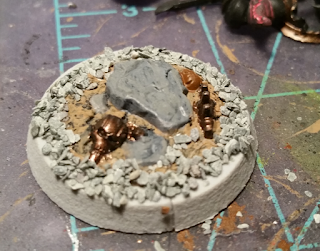