This is a fun one. Most of the art you'll see here as part of Art Mondays was done for fanzines during the Second Edition of Warhammer 40,000.  This one was never published, unfortunately, but I think it might have to do with the gun breaking the border which may have been a challenge for small publishers back in the mid-'90s. Not exactly sure. This was done in ink with pen and brush with black Prisma Color pencil and some dark graphite pencil for the backgrounds. 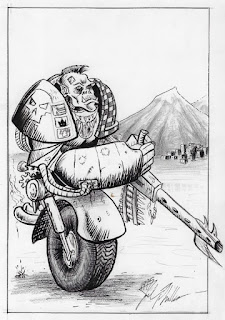 Anyway, the Gyro-stabilized Monowheel was a fun, but weird Wargear Card from the 2nd edition era Codex: Orks. It allowed the character who chose it to be able to zip around on the battlefield. I think the one time I ever took one my ork found himself alone and vulnerable after doing whatever it was he had set out to do,  and was gunned down by my opponent. The Telescopic Legs was the most popular (and mostly likely to be abused) one of these Wargear Cards.

Fun fact: there was indeed a model produced for the Gyro-stabilized Monowheel, and just about all of the weird bionic add-ons that appeared on the 2nd Edition Ork Wargear cards, but they were produced a few years earlier during the 'Ere We Go, and Freebooters era of 1st edition. They were no longer available during the 2nd edition of the game, at least not in blister packs anyway. But you could still get them through the UK Mailorder if you knew their product codes. 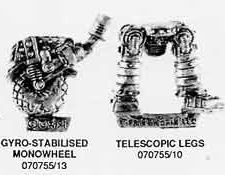 I managed to get them both, but never modeled them before the 2nd edition ended and both of these fun options disappeared from the game, apparently forever.

It seems that  there was a version created for Gorkamorka but examples of it are really hard to come by. I hardly recall it and I think I wasn't impressed with it as much as I was the original version so disregarded it. I sort of regret that now...

Why am I not surprised?

That being said I would like to get some of their WWII themed ork heads...

The Venom is ready to fly!  And here we are at the finish, but first let's check out the final completion stages of this model. Afte... 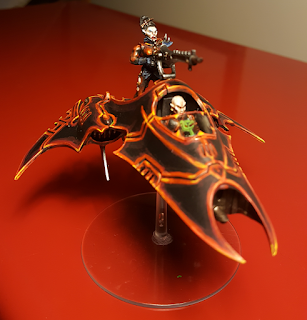