Welcome to Art Monday! This is a new feature where I post an old piece of the 40k art I did back in the '90s. Most of this stuff is unpublished but some of it was, or was intended to be. Back when a blog like this was pretty much science fiction, and we relied on fanzines for additional (and always unofficial) 40k content. The fanzine scene back then was quite the frontier. There were only a few but most of them were done fairly well. I was trying to break into comics but I was having more fun submitting spot illustrations to some of these 40k zines. I will write more about these times as they become relevant to the given pic being posted.

This pic started off as detailed drawing that I made in my sketchbook in the summer of '93. I revisited it a few years later, blew it up, lightboxed it and inked it. Later I would incorporate it into a comic feature that I worked on for a zine that never got published. The two main characters would get names and became the main characters of the story. In time, if the interest is there, I may publisb it here.

I work primarily in black and white but I wanted to know how these characters, and this image in general, would be colored. It helped me "see" how to balance things while I worked on the comic feature. This is a reduced test piece using color pencils and design markers done on 8.5" x 11" paper. The original image is 15"x10". This was colored around '95-'97. 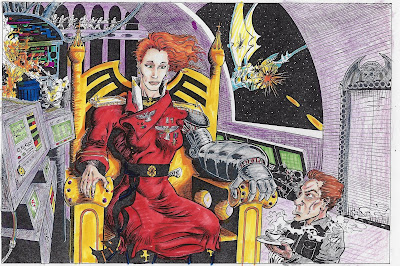 This piece was heavily influenced by the Space Fleet articles from White Dwarf. The ratling fellow bringing the tea has an Imperial Guard uniform in the style of the plastic/metal models from that time.

It's fun looking back at my old art and picking out the the things I would do differently if done today. My own evolution as an artist aside, the 40k "look" is far more deleveloped and codified since this time. I imagine the room would be even bigger, there would be more filigree and ornamentation, a few servo skulls buzzing about, a smokier atmosphere in this chamber, darker, with even more wires, some robed servators lurking about and the cogitators would be even more crude. Regardless, I recall having a good time working on this one and I hope you get a kick out of it too.

Email ThisBlogThis!Share to TwitterShare to FacebookShare to Pinterest
Labels: Art

lol, I like that the guys in back fighting a fire whilst the captain is being served tea!

Good to see your stuff. I like the description of going back to it multiple times and thinking about its evolution.

I tend to stop if I do anything half decent for fear of making it worse. http://devos4.blogspot.com/2017/07/something-slightly-different.html#comment-form

And I wonder how differences in location and time might have us start from different places and yet find ourselves sort of united in 40K. there's something to cogitate about.

Yeah, united in Warhammer! Seems like an achievement in both a social standpoint and a sales goal for GW. 😀